Oktoberfest in Stuttgart then Back to the States


(I apologize for the delay on this post, ending our European adventure. Life gets busy sometimes. I hope you don't mind the picture quality; they were taken with a cell phone.... and we may have had a couple beers.) 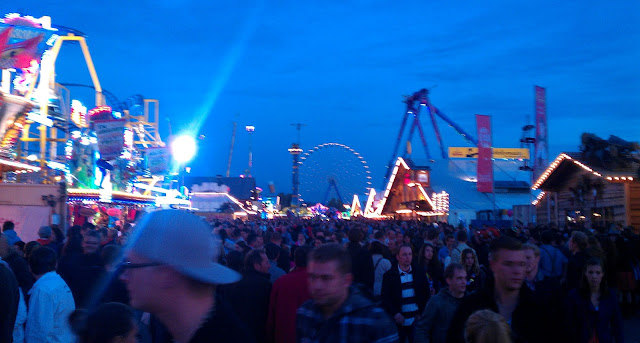 It was supposed to be a relaxed evening before our early flight back home to the U.S. Plans have a habit of changing with us though, and they certainly did this evening.

Upon checking into the hotel by the airport, the kind lady at the front desk suggested we check out the Oktoberfest happening in the city.  She said it was boring out here by the airport and was sure we'd have a good time at the festival.  It seemed innocent enough.  We've seen crazy pictures and video from the big Oktoberfest celebrations in Munich, but this one was probably much smaller and a lot more tame.  Why else would this little old lady be suggesting that we go?  Before we even had a chance to say no, she had already written directions and a schedule for the bus and trains for us to get there.  I guess it couldn't hurt to go check it out for a couple hours and then get some sleep. 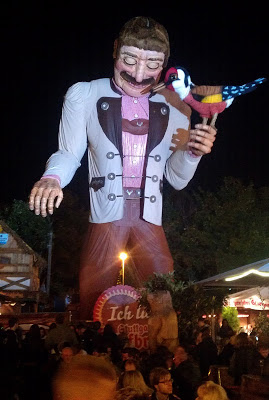 After a bus ride and a couple train transfers, we started to notice a lot of drunk local kids all dressed up in lederhosen and dirndls getting on and off the trains.  We could sense that we were getting close to something big.  When we arrived at the fairgrounds, we could not believe the scale of this event.  We have never been to anything this big, loud, bright... and drunk.  Imagine hundreds of thousands of VERY drunk people packed shoulder to shoulder in a setting similar to one of our State Fairs back in the U.S.  There were several beer halls that you needed reservations to get into, all with people dancing on the tables with large beer steins.  After about a half hour of wandering, we figured out where to go to get some beers and checked out all the food stalls.  If this is the Stuttgart Oktoberfest, what the hell is the Munich one like?  I can't even imagine. 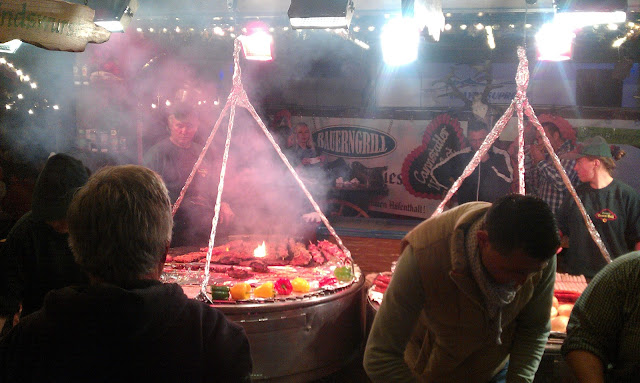 After enough beers to feel comfortable in that setting, we decided to call it a night and get back to our hotel for our early flight in the morning.  Even at late hours of the night, their public transport system works flawlessly, getting us back to our room with ease.

We couldn't think of a better way to cap off this trip.  It has been an experience of a lifetime, and we can't wait for the next one.  It'll be another year before we both have enough vacation time to do something again, but we're already planning for it.  Thanks for following along.