After raining all night, we woke up to sun in Sondrio.  This was a welcome surprise as we were planning on crossing the Alps back into Switzerland and Liechtenstein. We knew that snow was a serious possibility, so picking the lowest pass was a priority.  Instead of the famed Stelvio pass which was about 2800 meters high, we planned our route over Bernina Pass through Davos, which was about 2300 meters.

After eating breakfast, uploading some pictures and doing a bit of writing we hit the road in the late morning. It didn't take long for the sun to turn back into rain.  As we climbed in elevation, the rain turned cold, and eventually to light snow in the highest elevation.  Brayde had her heated gear running full blast, and I wore every piece of thermal gear I had, but was still cold.  Luckily the snow never accumulated, and the temperature warmed to about seven degrees Celsius as soon as we started dropping elevation again.  The rain never let up all day, but my Klim and Brayde's BMW waterproof gear performed flawlessly, never leaking.  We didn't let the bad weather get to us, we've done our share of riding in the rain, and the roads were still breathtaking. 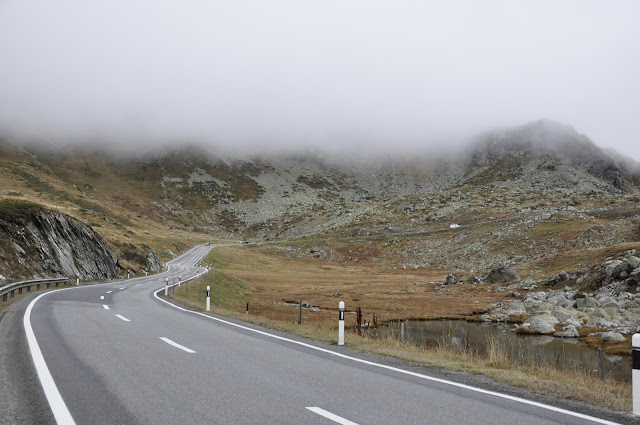 After crossing over the higher elevation passes of the Alps, we decided to visit the very small country of Liechtenstein. We parked the bikes in a garage, and wandered around Vaduz, the capitol city, where the castle that the prince lives in is located. The rain continued on, and we were soaked from walking around.  A quick lunch and a search for a hotel confirmed, that Liechtenstein was one of the most expensive countries to travel in, and we wouldn't be able to afford lodging there.  The owner of the sandwich shop suggested riding 50 kilometers to Austria, and finding lodging there since it was much cheaper.  We took his advice, threw our riding gear back on over our soaked clothes, and headed to Austria.

After visiting many hotels that were all booked up, or closed for the season, we finally found lodging. Just across the border, we snagged a decent room in the town of Feldkirch, named after the old church in the field that happened to be right by our hotel.  This is where we'd stay and dry off for the night.  In all the rain and cold, we forgot to take any pictures of Liechtenstein or Feldkirch.