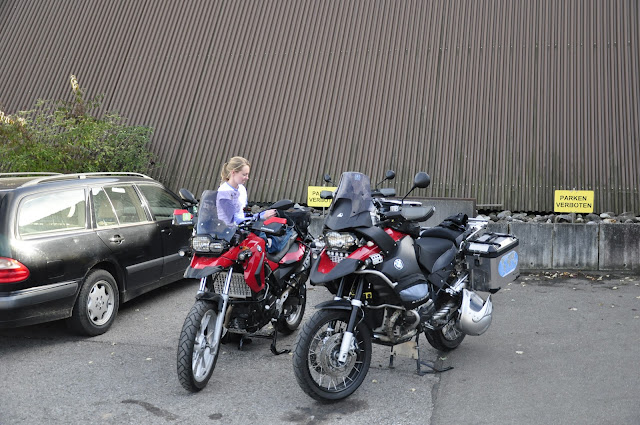 After a short, early-morning flight from Berlin to Stuttgart and a long drive from Stuttgart to Niedereschach, we arrived back at the Touratech headquarters in the afternoon.  After a quick lunch, it was time to pack up the bikes and head out.  This was easier said than done.  First we did a little shopping.  We needed maps for the countries we’d be riding through as well as new riding gloves for both of us.  After that, it was time to load the bikes with everything we needed, and pack our bags to leave at Touratech.  This was the most time consuming part. We decided not to camp during this trip, so really all we needed to bring were clothes, camera, and riding gear, but it takes a lot more time to pack someone else’s bike that you’re not familiar with.  By the time we hit the road, it was around 4:00 in the afternoon.  We had hoped to make it to Montreaux, but that definitely wouldn’t happen.

The roads were excellent, and gave us a good chance to get used to the feel of the bikes. A stop at the Swiss border required us to purchase a pass for one of the motorcycles to ride on the highway.  Brayde’s bike already had one.  This is sort of like paying the tolls for all the roads in Switzerland for the year, all at once.  Too bad we were only going to be there a couple days.

The first stretch of the trip took us to Laufen Switzerland, a quiet little town not too far across the border.  We booked a room at the only hotel we could find and had a nice dinner amongst a bunch of rowdy local farmers at the restaurant next door.  The plate of food I had was massive, but was a good sample of local sausages, liverwurst, and pork.  After catching up on some blog posts, it was time to catch up on some sleep.  Hopefully we’d make it to Montreaux tomorrow. 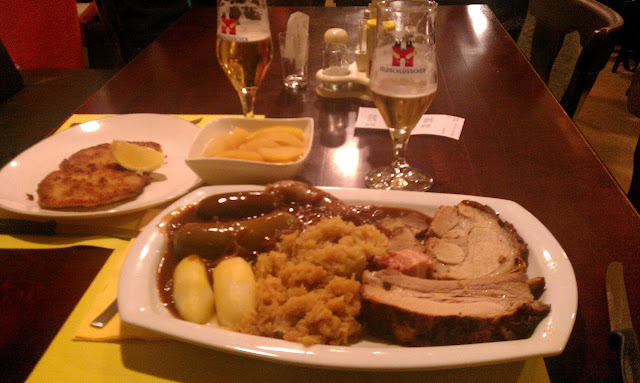