Rained Out in Costa Rica and Panama 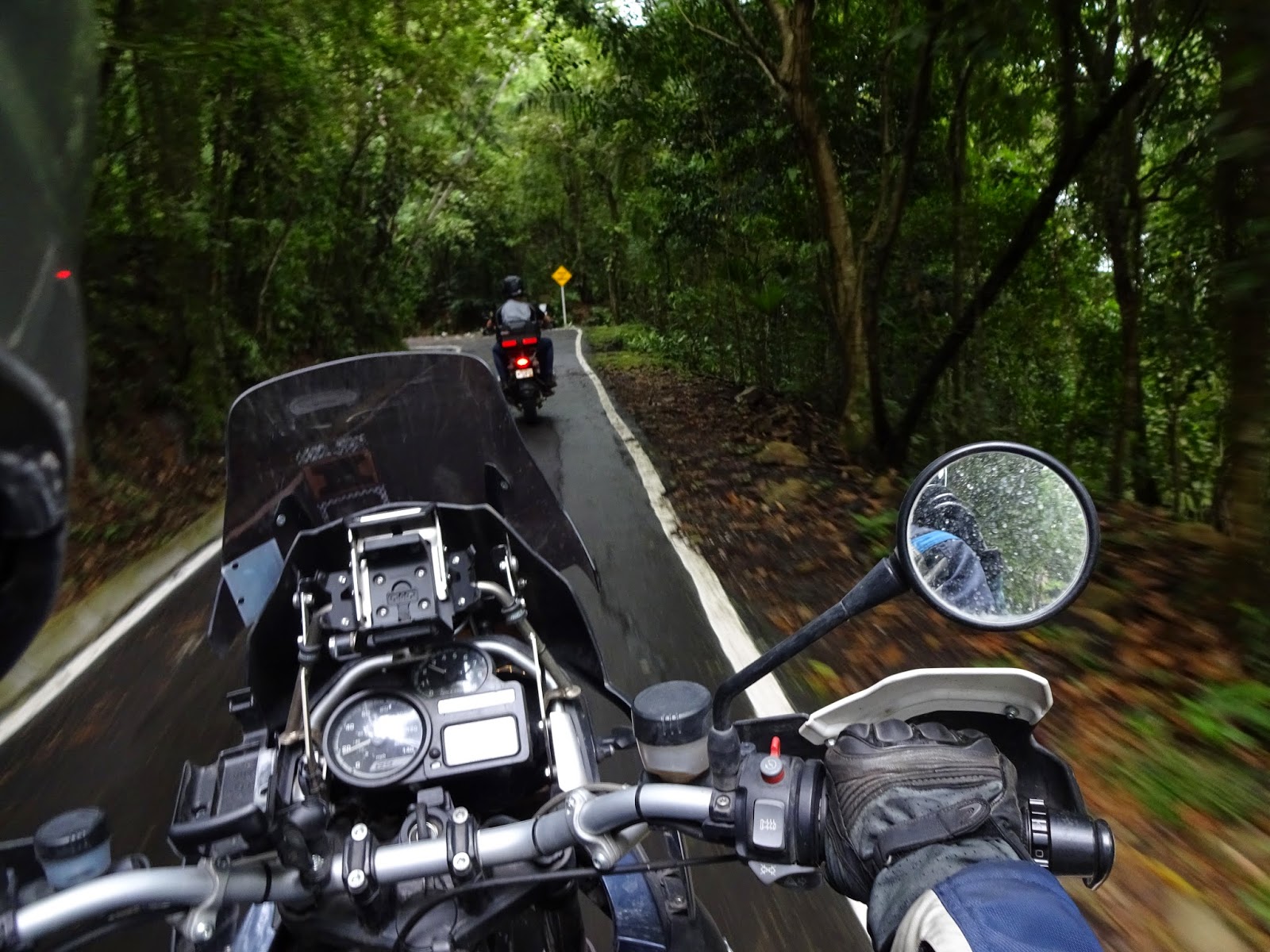 Once we entered Costa Rica, the clouds opened up and unleashed rainstorm after rainstorm.  We thought we had missed the rainy season in Central America, but we were wrong. This was the kind of consistent rain that turns streets into rivers, dirt roads into mud, and finds the weak points in any kind of riding gear.  Costa Rica was one of the countries in Central America we were looking forward to the most due to its vast jungles, beautiful beaches, mountains, and volcanoes.

The  border crossing from Nicaragua to Costa Rica was the first one where we had to hire a "fixer" to help us through.  While the fixers work for "tips," their service really isn't optional.  In our case, the fixers we hired were very good, and got us through the thick lines of tourists quickly by pulling a few strings.  They ended up costing about $20 USD, but we didn't mind paying after seeing how quickly they got us through.  The Costa Rica side was another story.  While we made decent time getting through immigration and customs for our motorcycles, we had to wait a couple hours while getting the mandatory insurance for our motorcycles.  The process was so slow due to the handwritten forms, lunch breaks, and long line of truckers needing the same thing.  Overall, the total crossing took about 4 hours, the longest one yet.

Our first stop in Costa Rica was Lake Arenal and its nearby volcano.  We decided to splurge on a room at a mountaintop lodge that night because you could see the volcano, and even its lava flows at night.  This would be one of the highlights of the trip.  The first night at the lodge was too cloudy to see anything beyond about 20 feet, so we figured we'd take in the view in the morning.


In the morning, it was still clouds, and torrential downpours.  Rather than waste the opportunity of a great view like this, we decide to stay another night and give the weather a chance to clear up.  We spent the day waiting out the weather inside the lodge, watching rainstorm after rainstorm come and go, drinking beers, and watching the wildlife out the window. 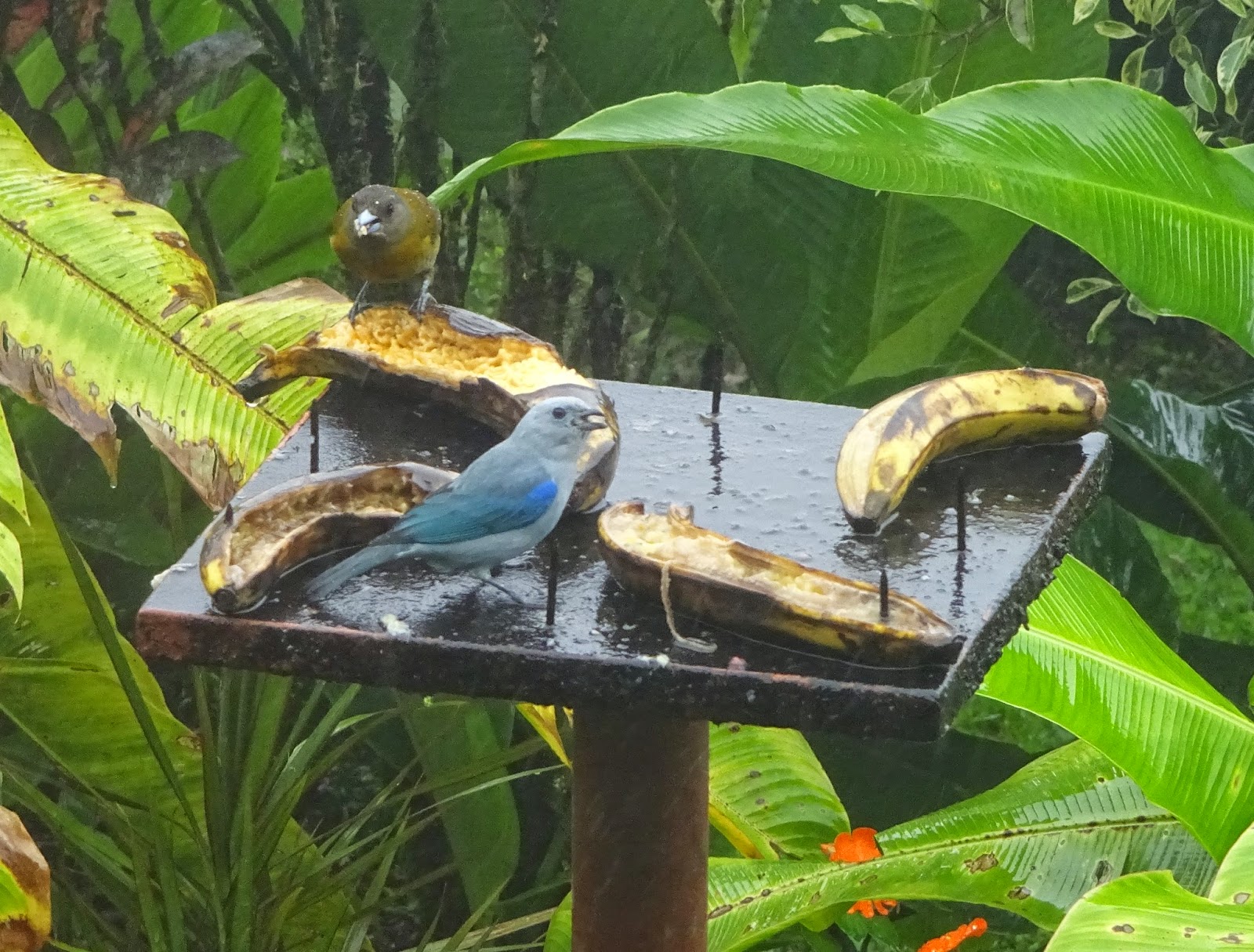 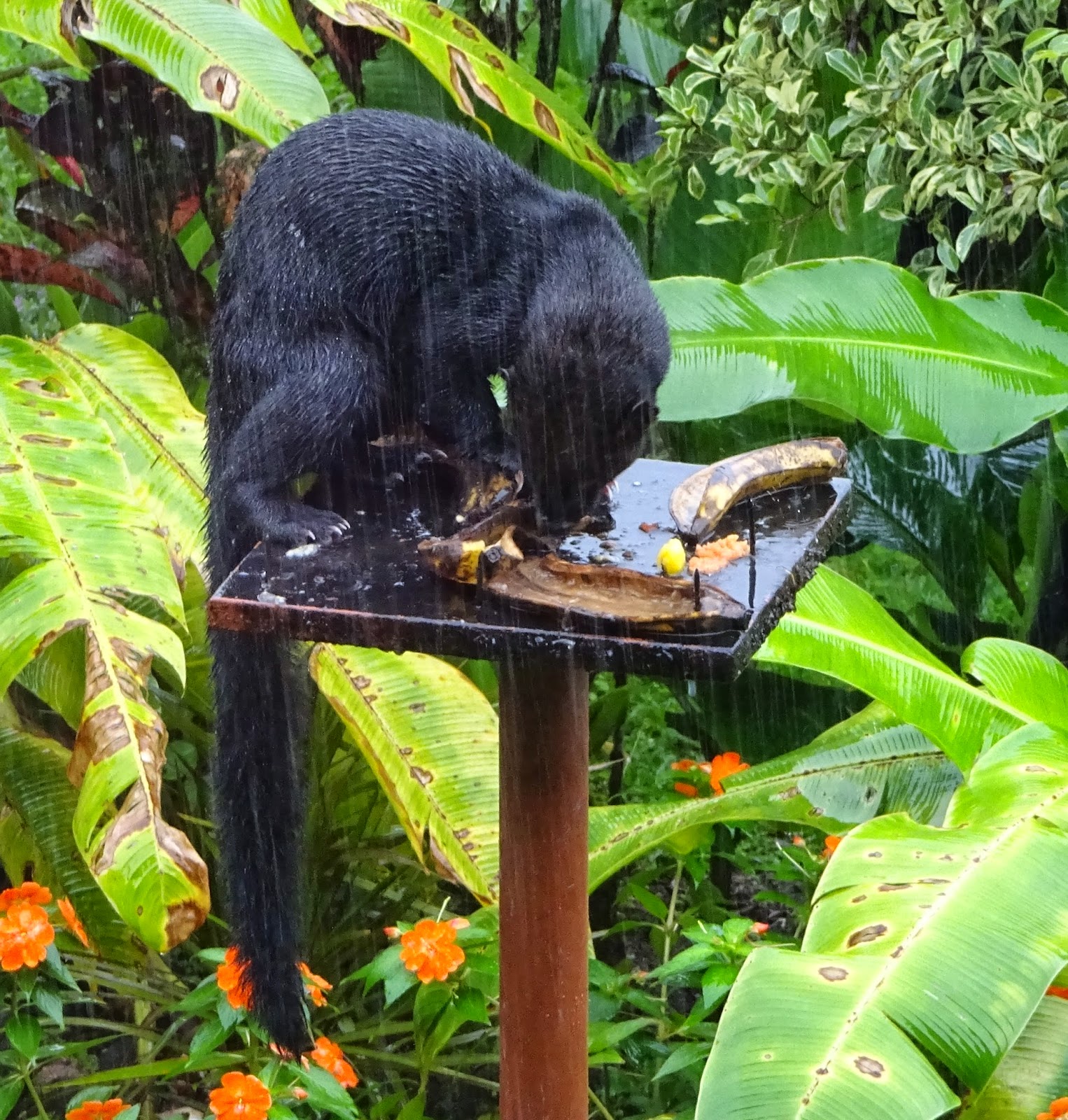 After a day and a half of trying to see the Arenal Volcano, and racking up a hefty hotel, restaurant, and bar tab, we decided to give up and hit the road.  We'll have to return another time to see the sights.

Looking at the weather maps online, it looks like the rain is unavoidable, but possibly less on the Pacific coast. So, rather than stay in the mountains as we planned, we decide to head to the beach town near Manuel Antonio National Park.  On this ride, we get our first taste of Costa Rican driving.  It is much different than anything we've experienced so far.  Cars drive the speed limit, or slightly under.  Large trucks drive about 20 mph, and unlike everywhere else,  no one really passes them.  This made for about double the travel time we had expected, but I guess in the end was much safer than a lot of the other traffic we've been in.  On the way to the beach, we cross a bridge over a muddy river with what appeared to be many small logs.  We finally realized that the logs were actually crocodiles in the wild.  By the time it had clicked in our minds, it was a little too late to turn around for a photo.

The beach was very nice, and the water was much warmer than in the Pacific Northwest.  This was our first beach experience so far on the trip.  Although very touristy, the town was still nice and we enjoyed the stay and a brief pause in the rain before it resumed the next day.

Tired of riding in the rain, we figure we'll have to experience the beauty of Costa Rica another time.  It's easy to fly to from the U.S. anyway.  In the morning, we ride a nice dirt road to the town of Golfito, where we'll stay before crossing the border in the morning and possibly do a jungle tour or something.  We were welcomed in Golfito by some of the hardest rain of the trip.  No jungle tour for us with this kind of weather.  I guess our whole ride so far has been a jungle tour of sorts anyway. 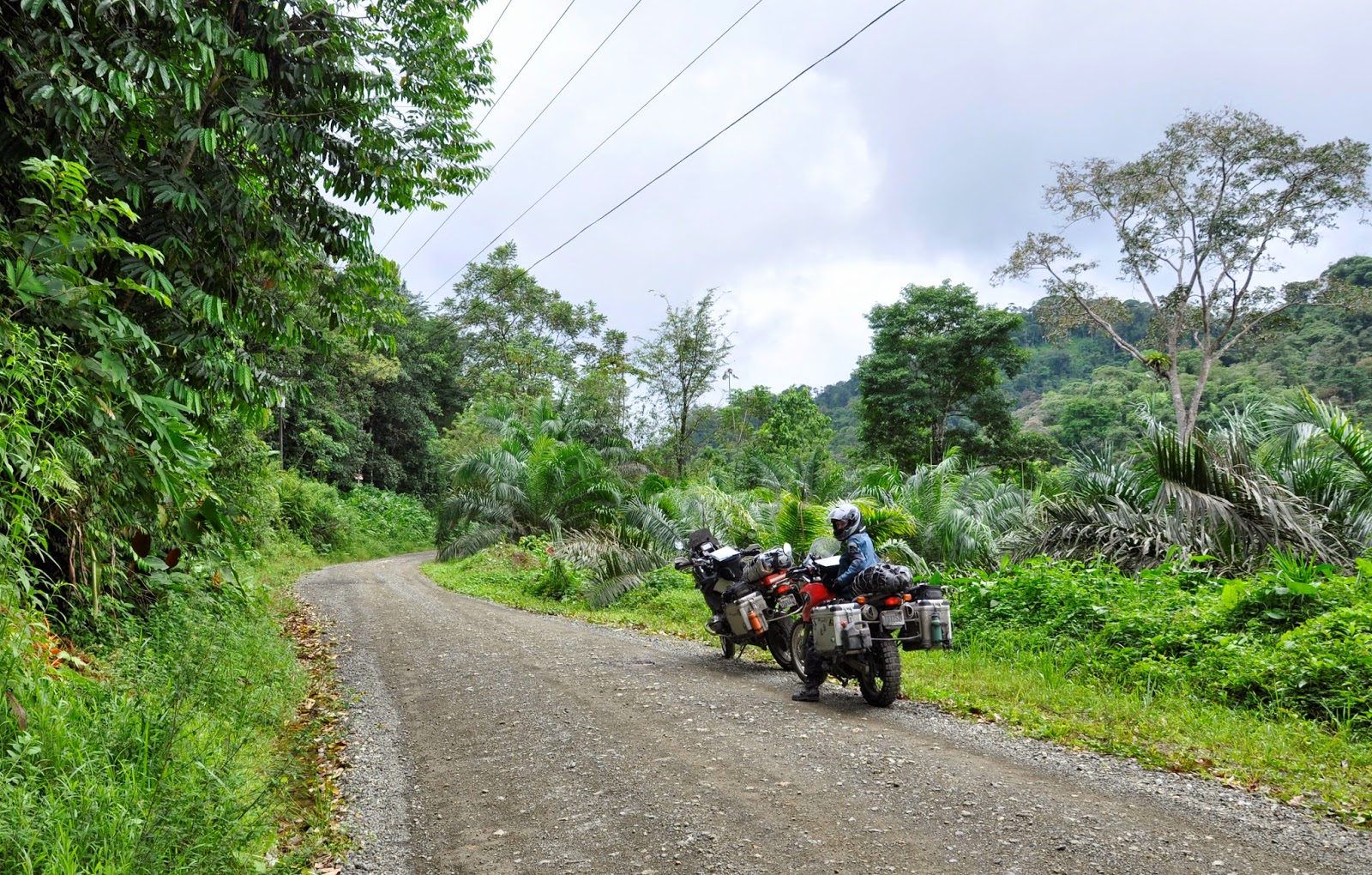 Again, in the Costa Rica - Panama border crossing, we were "required" to hire a fixer.  In this case, our friend Roland had been through the border a couple days before and recommended the fixer Luis for us.  When we arrived at the border, Luis was ready for us, spotting our motorcycles.  The border crossing was straightforward, and Luis helped us get through quickly.  His services cost us about $15 USD.  The total border crossing time was just over 2 hours.

Shortly after crossing the border, the rain started again.  The road was pretty straight, with construction for miles.  It was not the most fun ride, and all things considered, we made the decision to push on to Panama City as fast as we can and try to make an earlier ferry.  We spend our first rainy night in Santiago, then make it to Panama City the next day to stay with our friends Carlos and Alison. 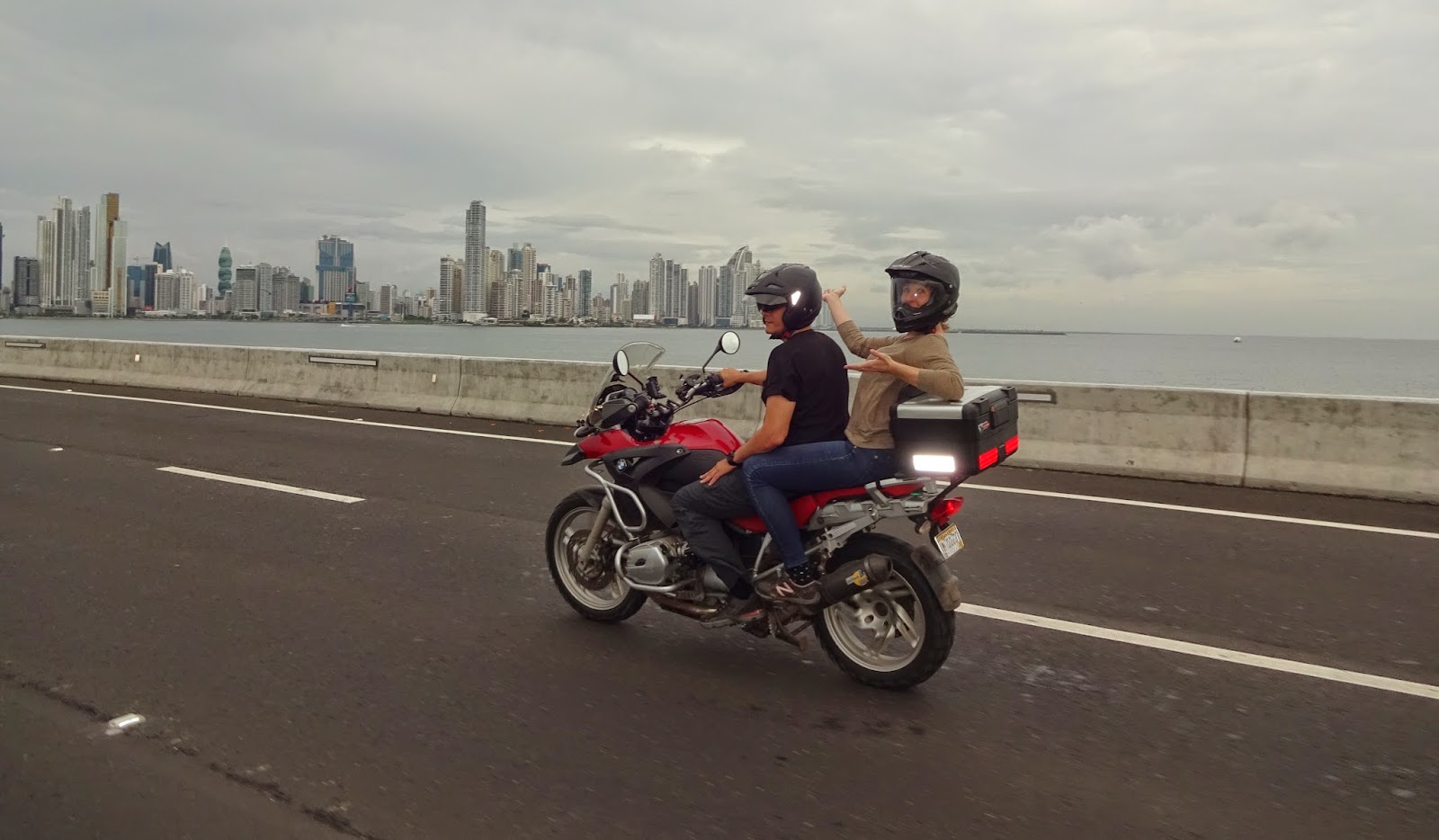 Panama City is a very large and international city.  Much different than anywhere we've stayed so far.  Our hosts Carlos and Alison take good care of us, and take us to some great sites and food.  The city is the bottleneck for all travelers headed south to Colombia, so during our time there, we run into many other motorcyclists doing the same trip, including Roland.  There is no road between Panama and Colombia because of a reserve called the Darien Gap.  Anyone with a motorcycle or overland vehicle has to either hire a sail boat, ship by plane, or take the new ferry that just started sailing in late October.  The new ferry is by far the cheapest and fastest option but lacks the adventure of the sailboat which makes several stops at islands along the way.  For us, the ferry is the way to go with our limited time and budget. 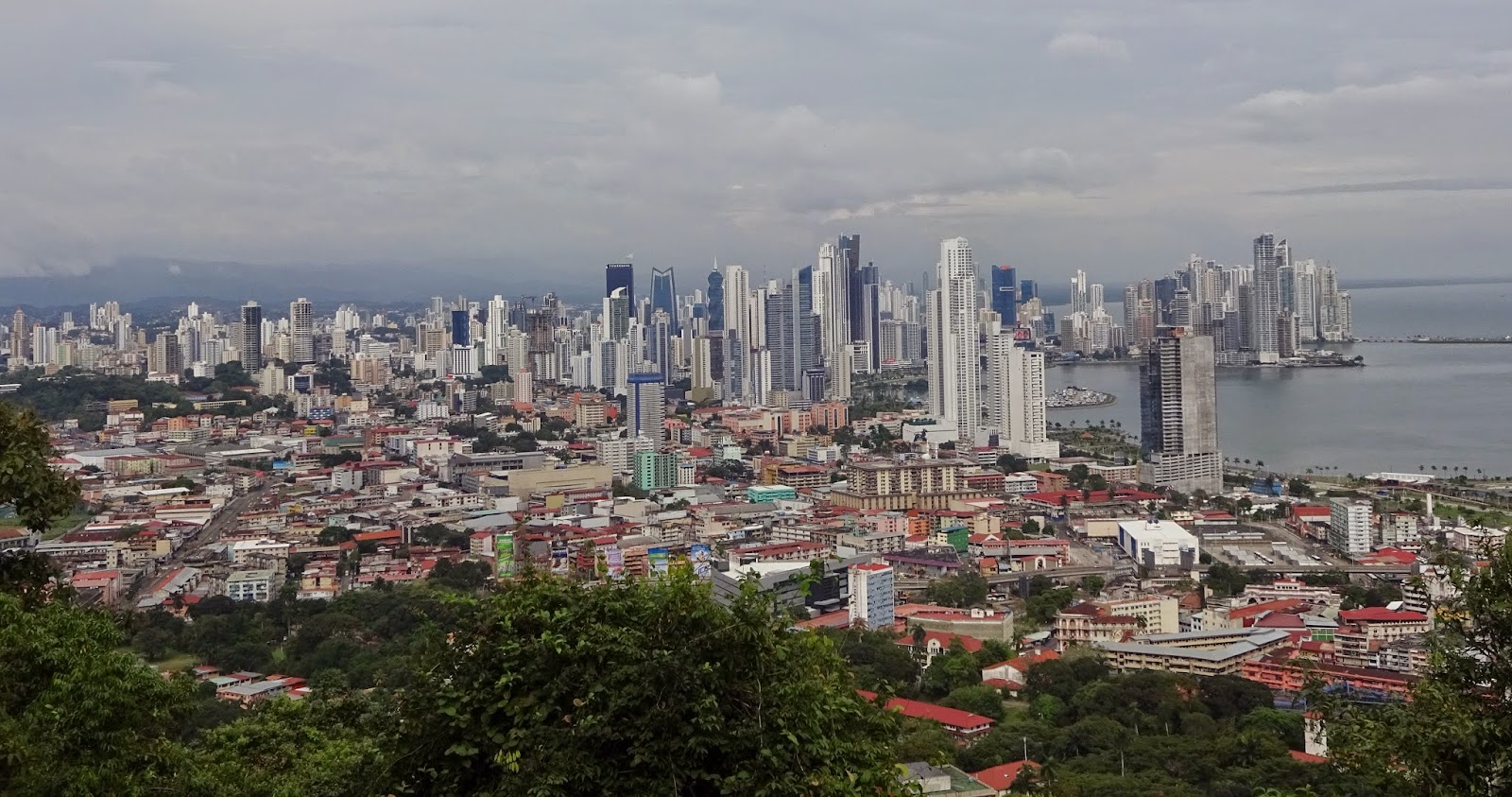 Unfortunately we weren't able to bump up our ferry reservation, but fortunately we had a nice place to stay for the extra two days, and great hosts.  We spend the weekend exploring the parks, reserves, and historic areas of the city. 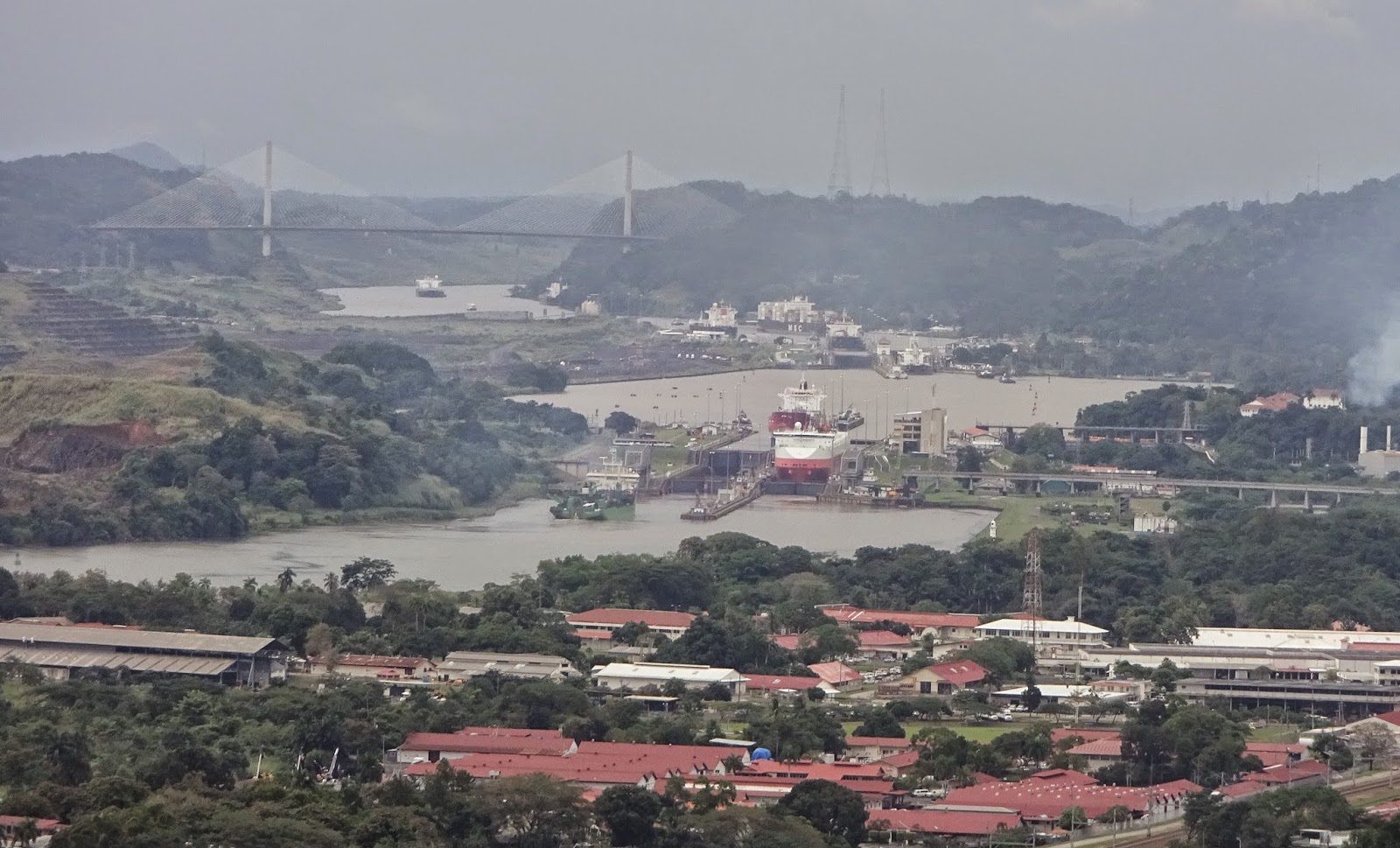 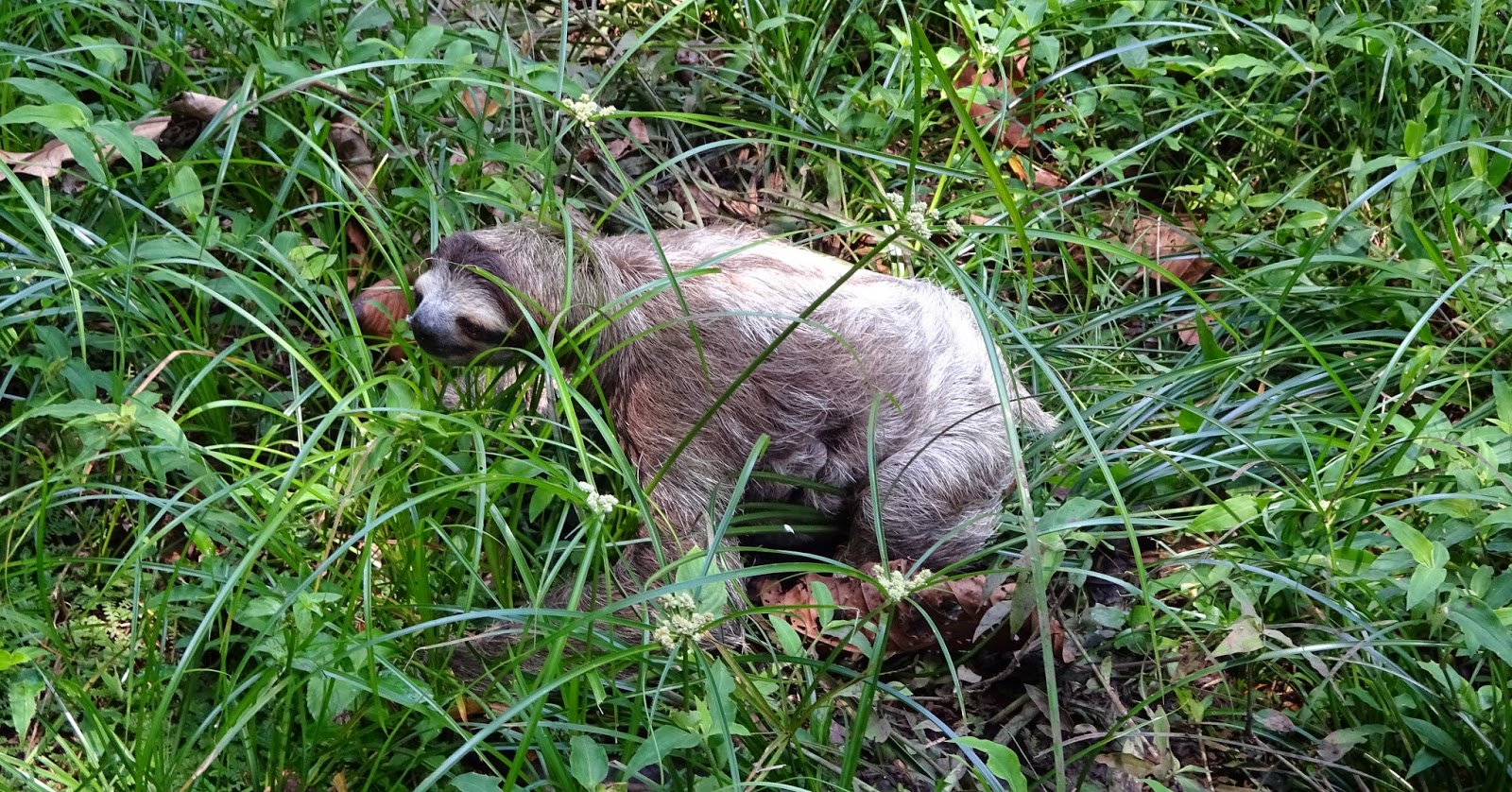 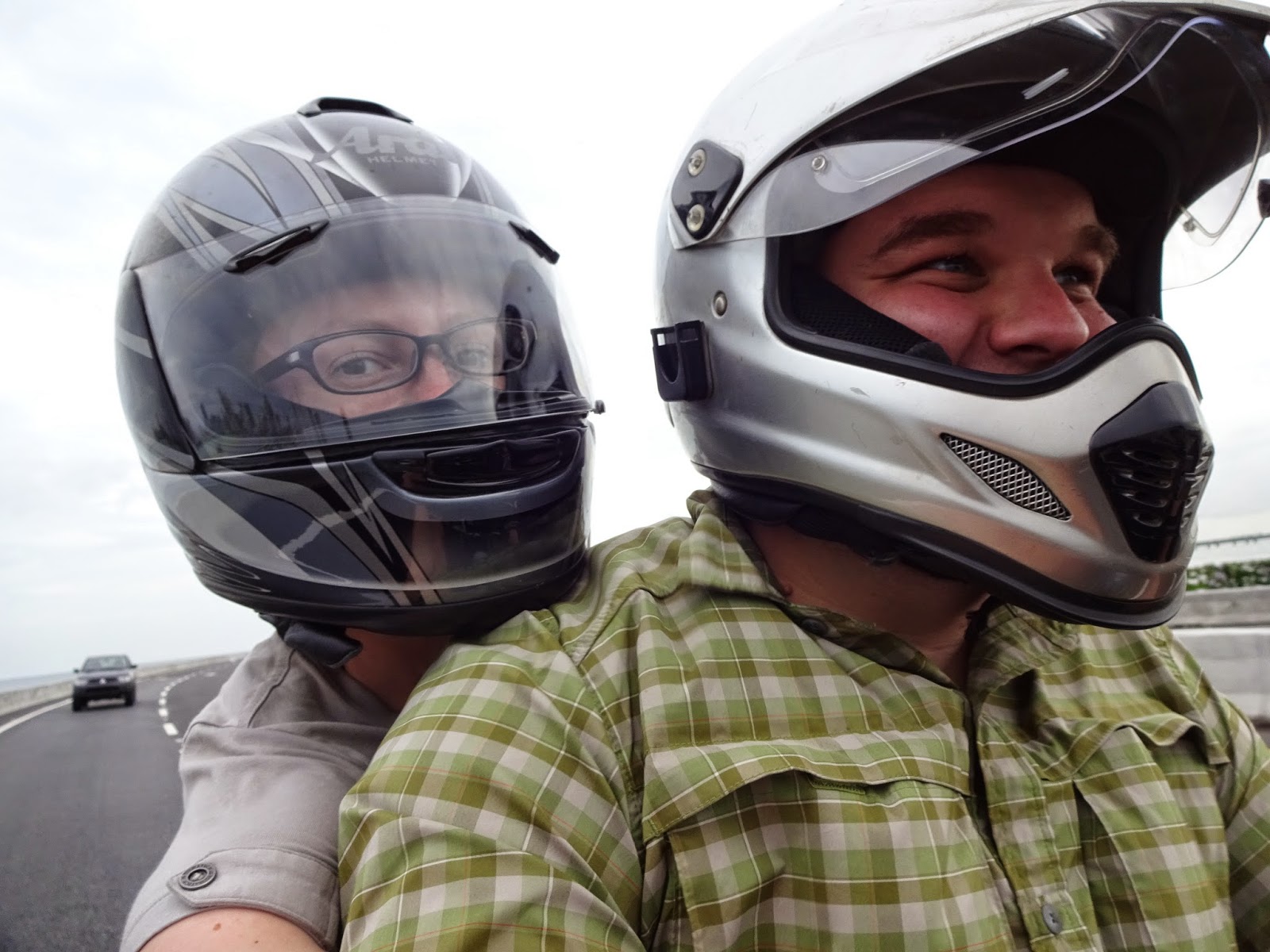 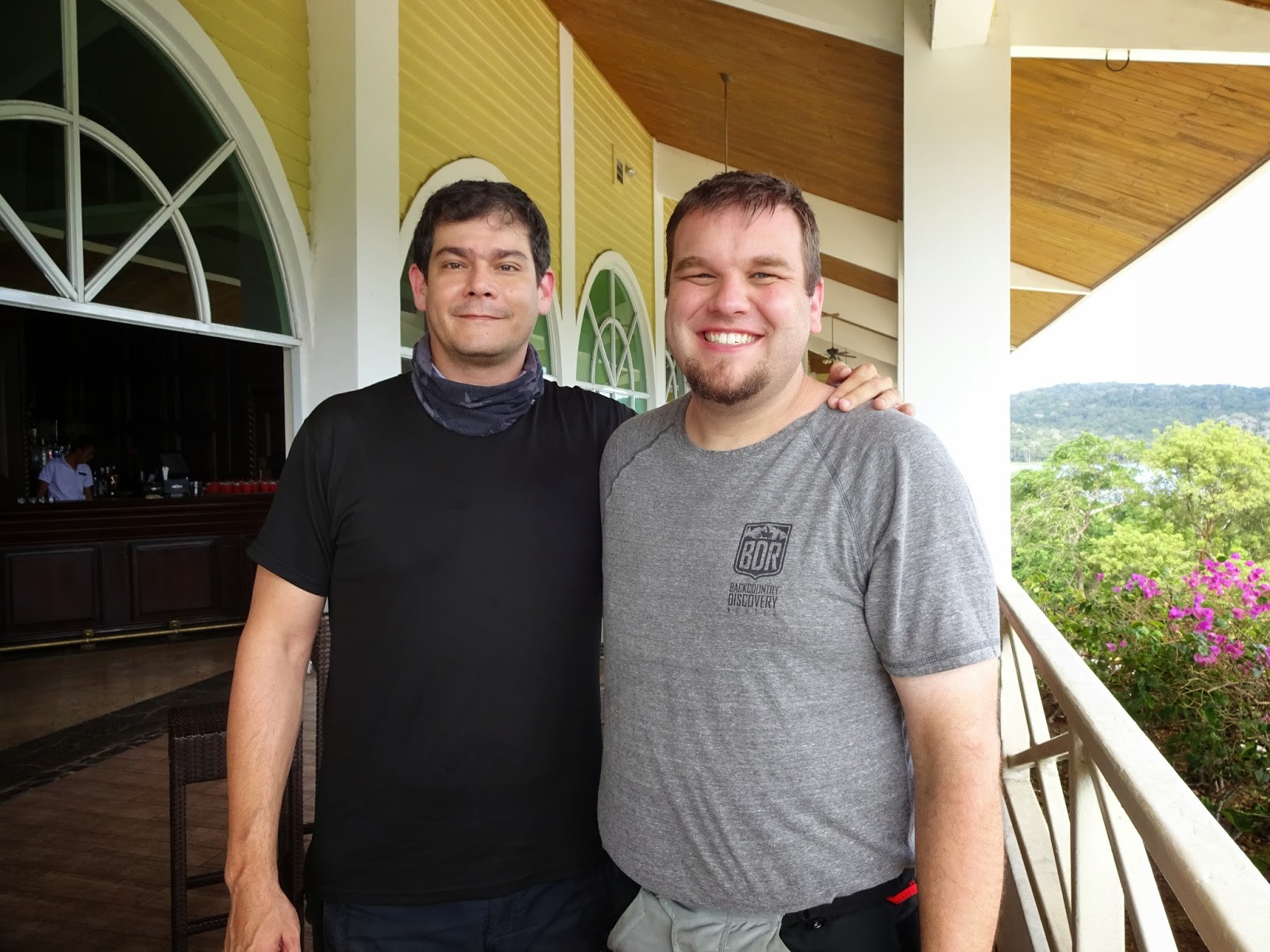 Our ferry reservation was on Wednesday, and Monday was a public holiday (Mother's Day), so we would have to do all our paperwork for the motorcycles in Panama City on Tuesday.  On Monday we have time to change the oil on both of the bikes and do a little maintenance. While we planned to spend the first half of Tuesday taking care of the paperwork and the afternoon exploring the locks, instead we spent the entire day with the ferry process.

The routine was similar to the Central American border crossings we were accustomed to, but with the bureaucracy amplified greatly.  We spent the whole day riding between offices on opposite sides of the busy city, getting stamps, waiting for offices to open, and getting final approval for the export of the bikes by boat.  On top of all that, we learn that we are required to be in Colon the next day to start the customs process for the boat with the motorcycles at 8AM  for our 7PM sailing, instead of the 3PM that was listed on the website.  Tomorrow is going to be a long day with an early start.

We woke up early and rode the hour and a half to Colon, only getting lost a couple of times, and arriving at the port about an hour late.  It turns out it really didn't matter, and we could have shown up much later.  We spend the day sitting in a sunny parking lot, waiting for the agents to process our paperwork. 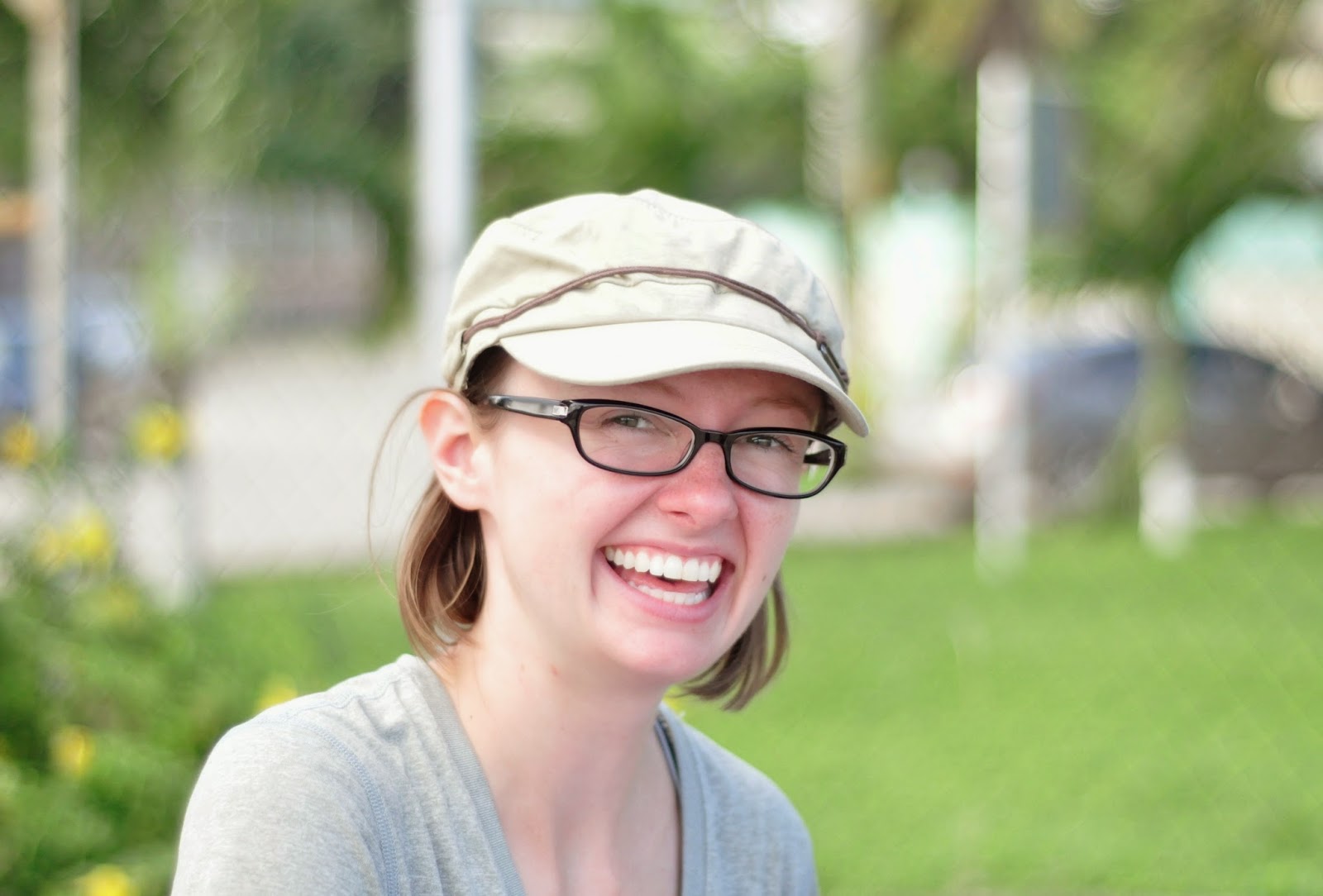 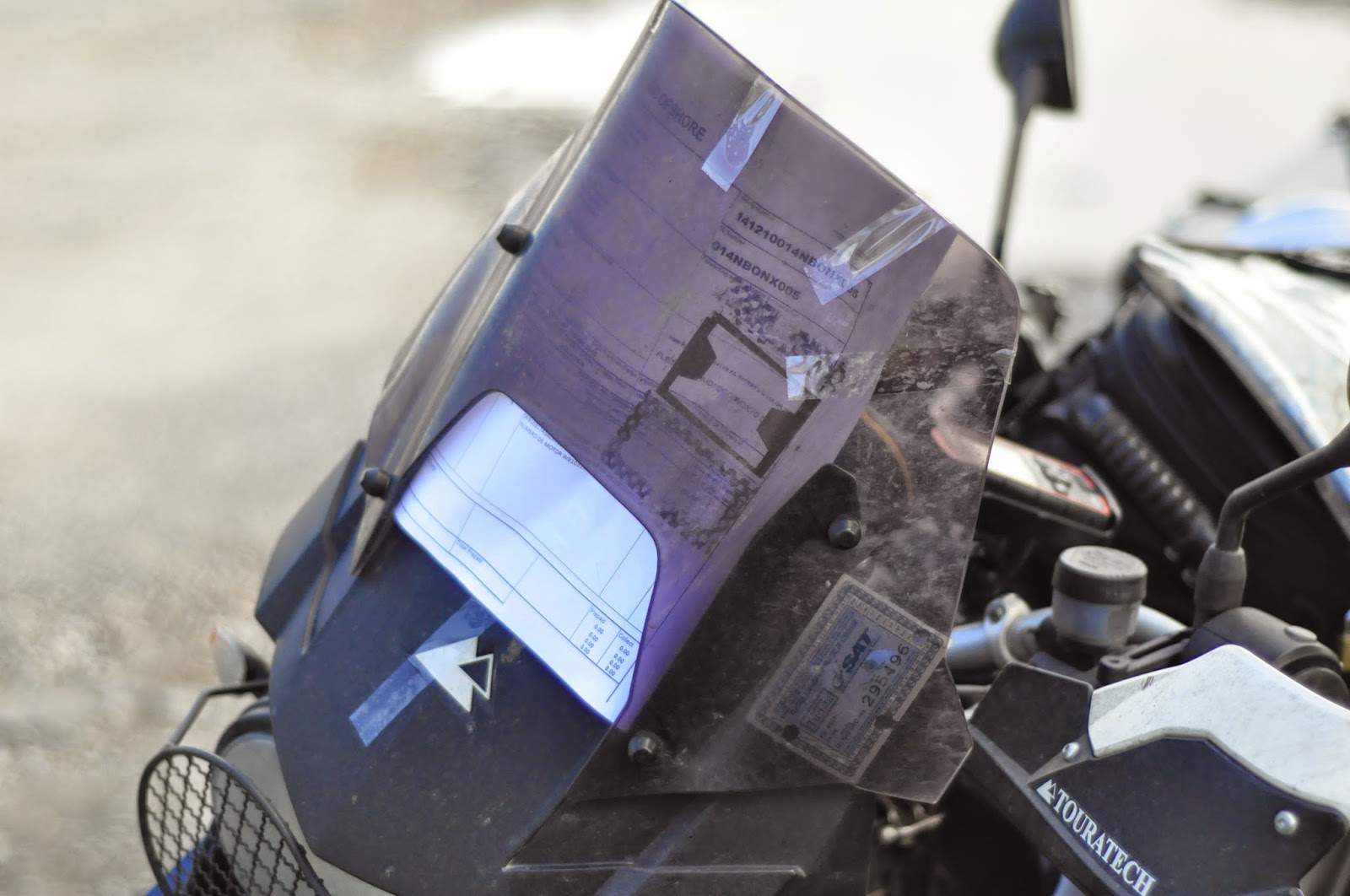 By the time our bikes were inspected and bags searched 3 times, our and the rest of the motorcyclists' patience was stretching thin. After riding the bikes up the passenger ramp and waiting for another couple hours, we finally board the boat and set sail around 8pm. 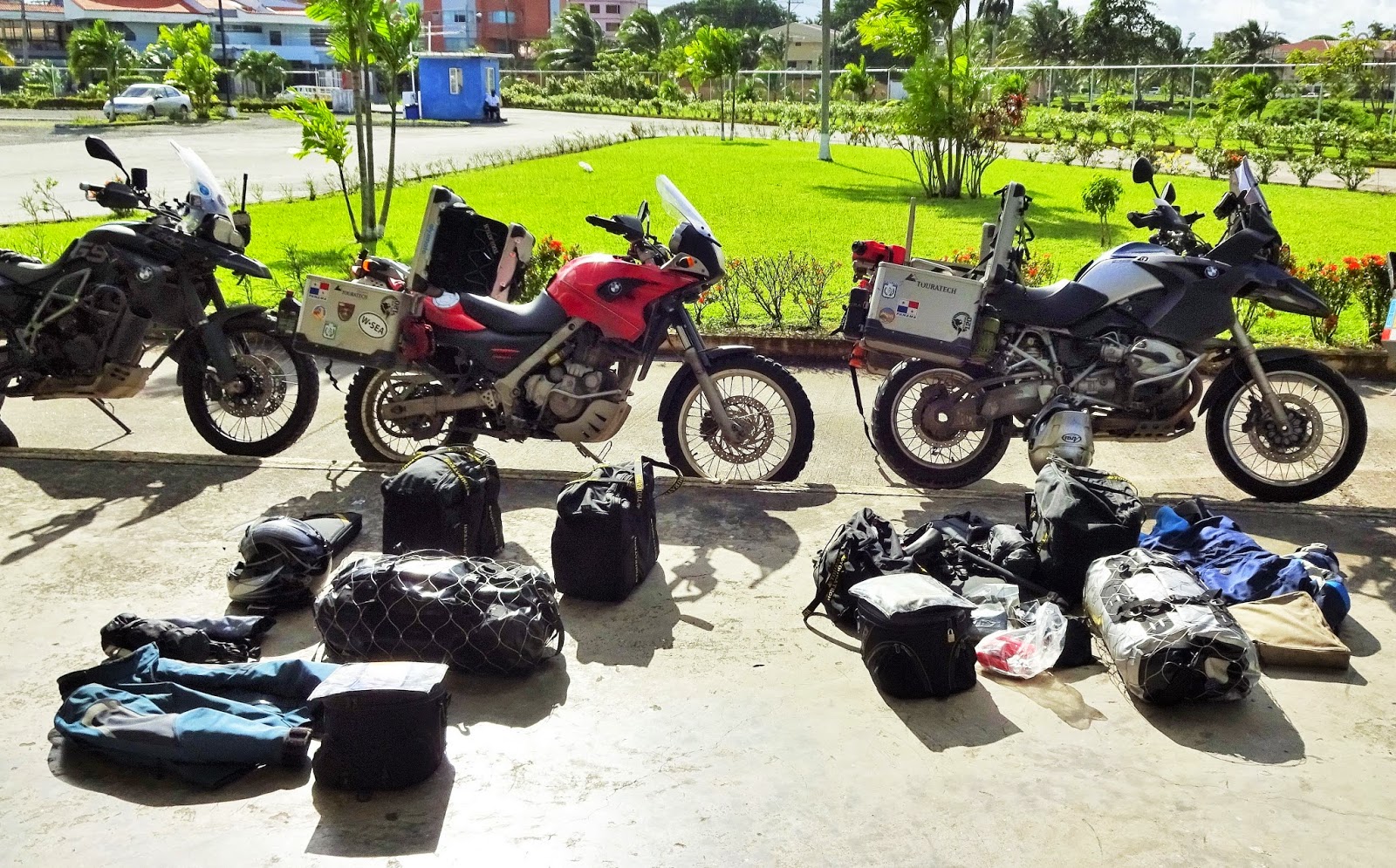 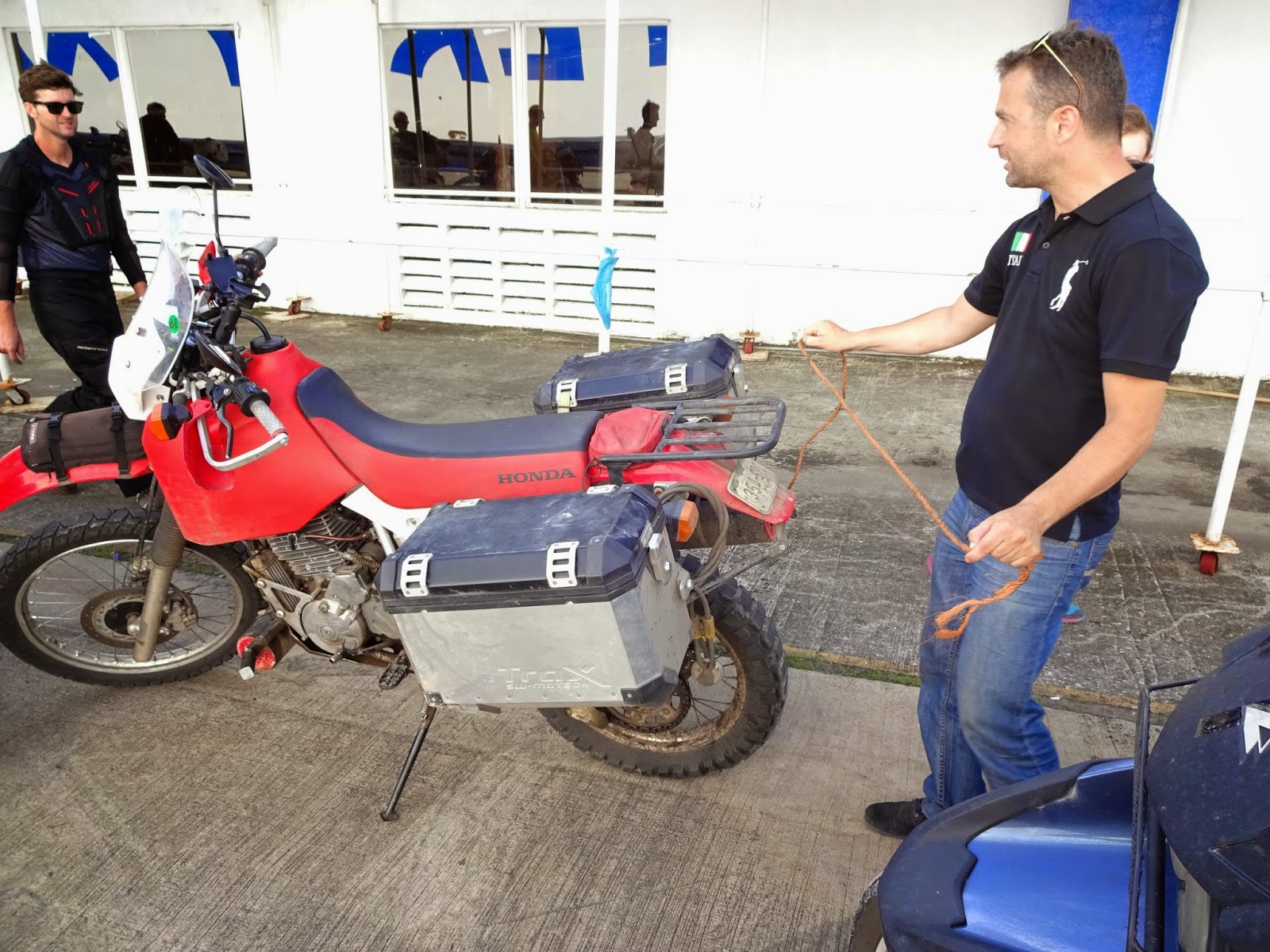 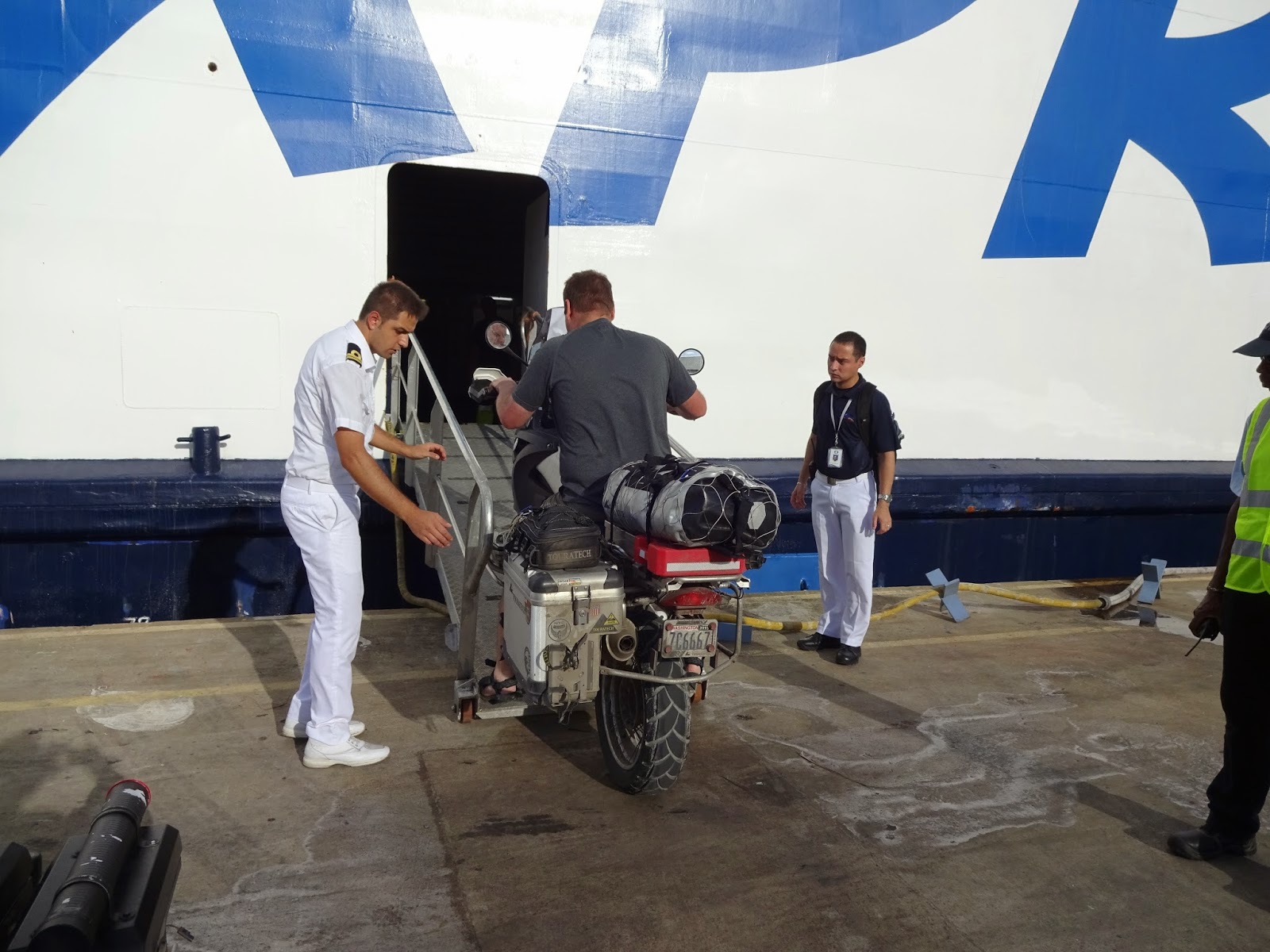 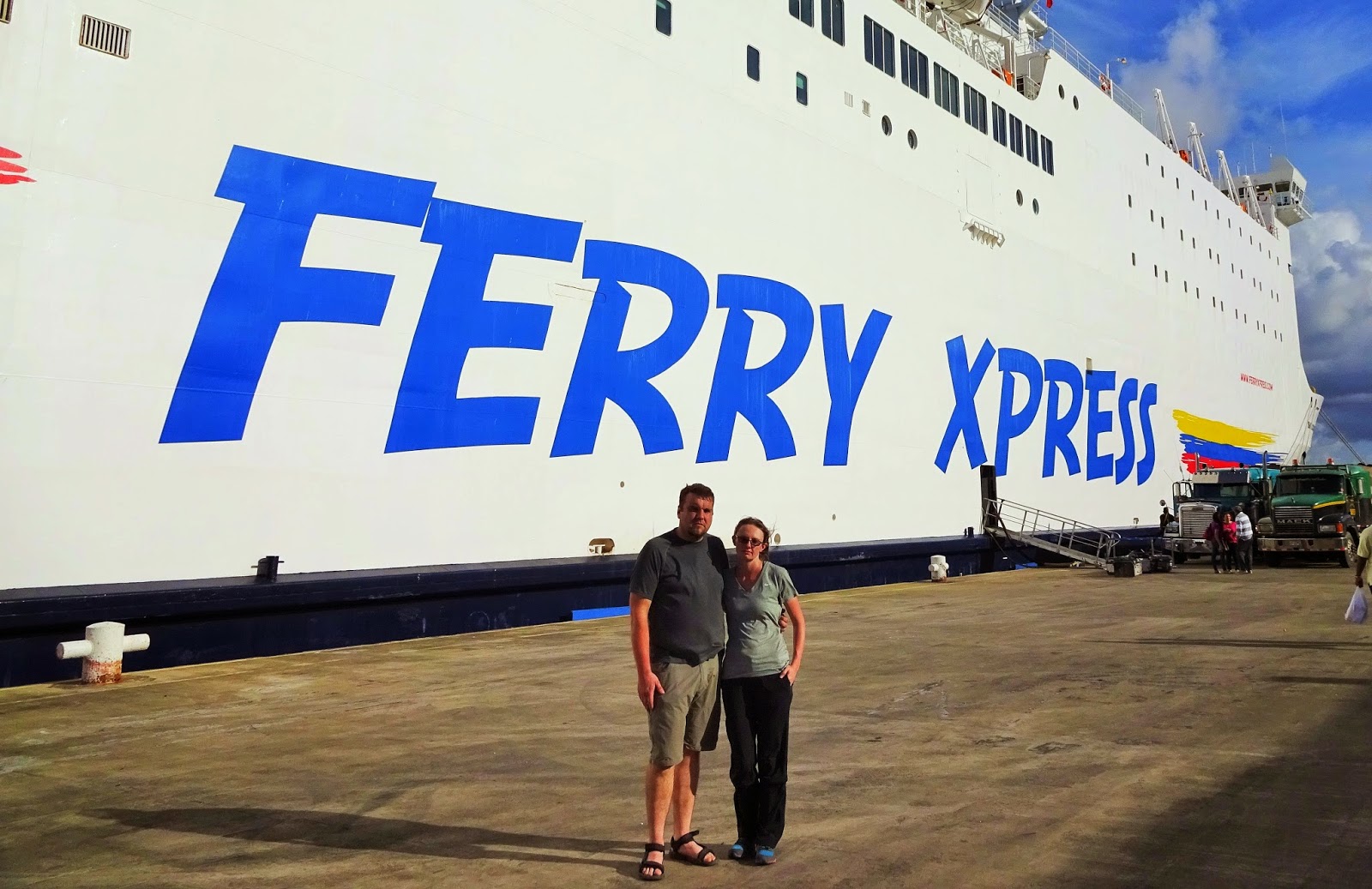 Once on the boat, the crew was so nice that we instantly forgot how frustrated we were that day.  The food was good, the room was nice, and everything was great.  We get a good night's sleep in our cabin, and wake up the next morning for more relaxing before arrival in Cartagena.  We are excited for the next leg of our journey.  Everyone says that once you hit South America the whole trip feels a lot more real.
Posted by Matt at 10:15 AM