All said and done, our first official border crossing into Central America went well. We arrived at the Mexico-Guatemala border at about 10:30am on a Sunday, and the whole process took about two hours. Compared to the US-Mexico border, it felt slow, but everything was straightforward. We just brought copies of our documents, patience, and friendly faces, and everything went smoothly. As will probably happen many more times along this trip, we also bumped into more riders heading down to Tierra del Fuego like ourselves. We know we're by no means pioneers on this trip of ours, but we're still excited about it and can tell everyone else we meet along the way is excited about their own adventures, too. We even got permission to leave one of our Willson 120 stickers on the bulletin board in the Guatemala immigration office! 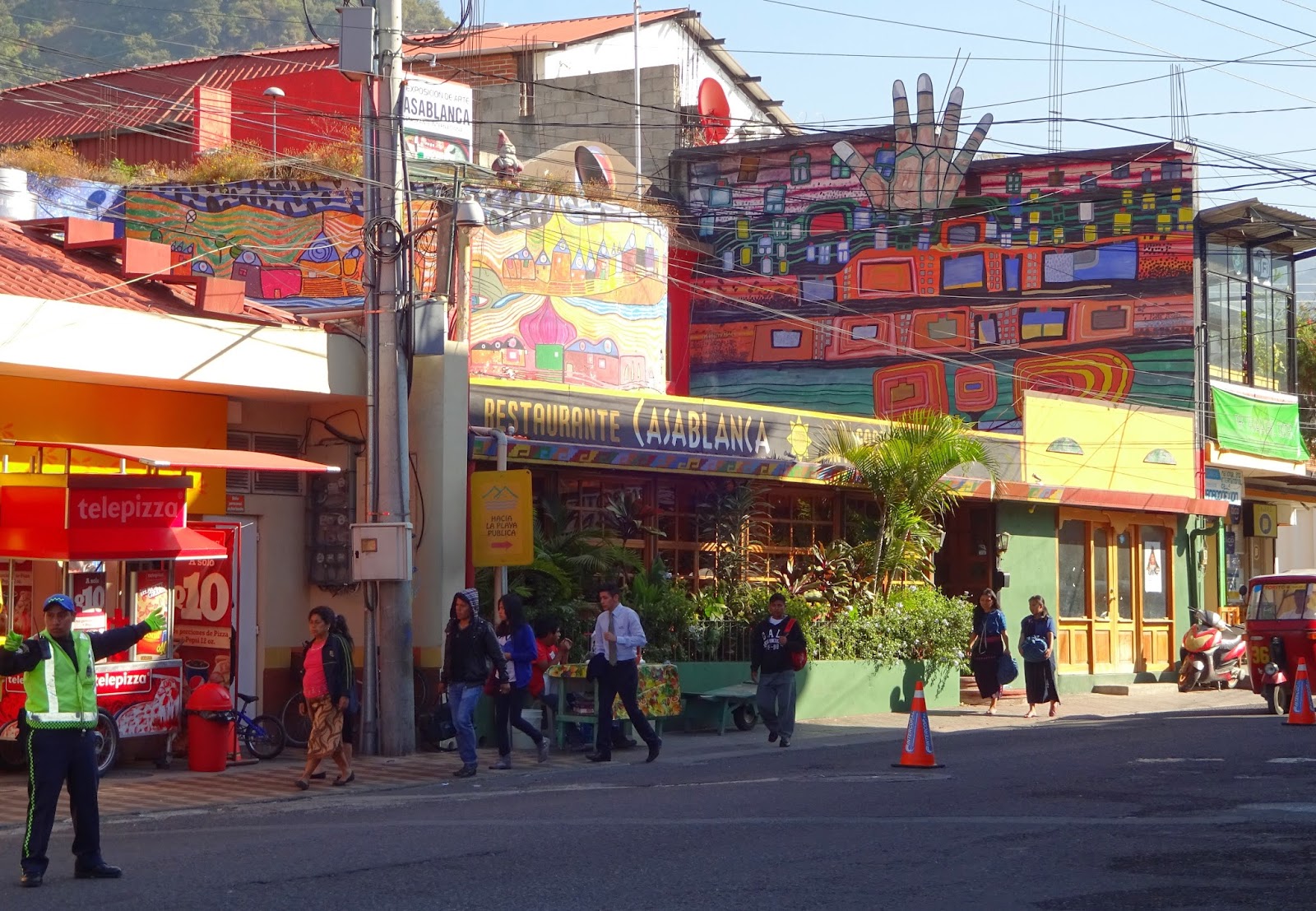 As we get further into the country, we notice what the towns may lack in repair, they make up for in color. Everything is painted in bright, bold colors—even the public buses, which appear to be hand-me-down school buses from the US. These buses, by the way, do not ever come to a complete stop; people just hop off and on while it continues rolling. There are also workers who periodically pop out the rear emergency exit to scale the ladder (while the bus sails down the road, of course) and pitch down the large items like 50-pound bags of beans, luggage, and furniture. 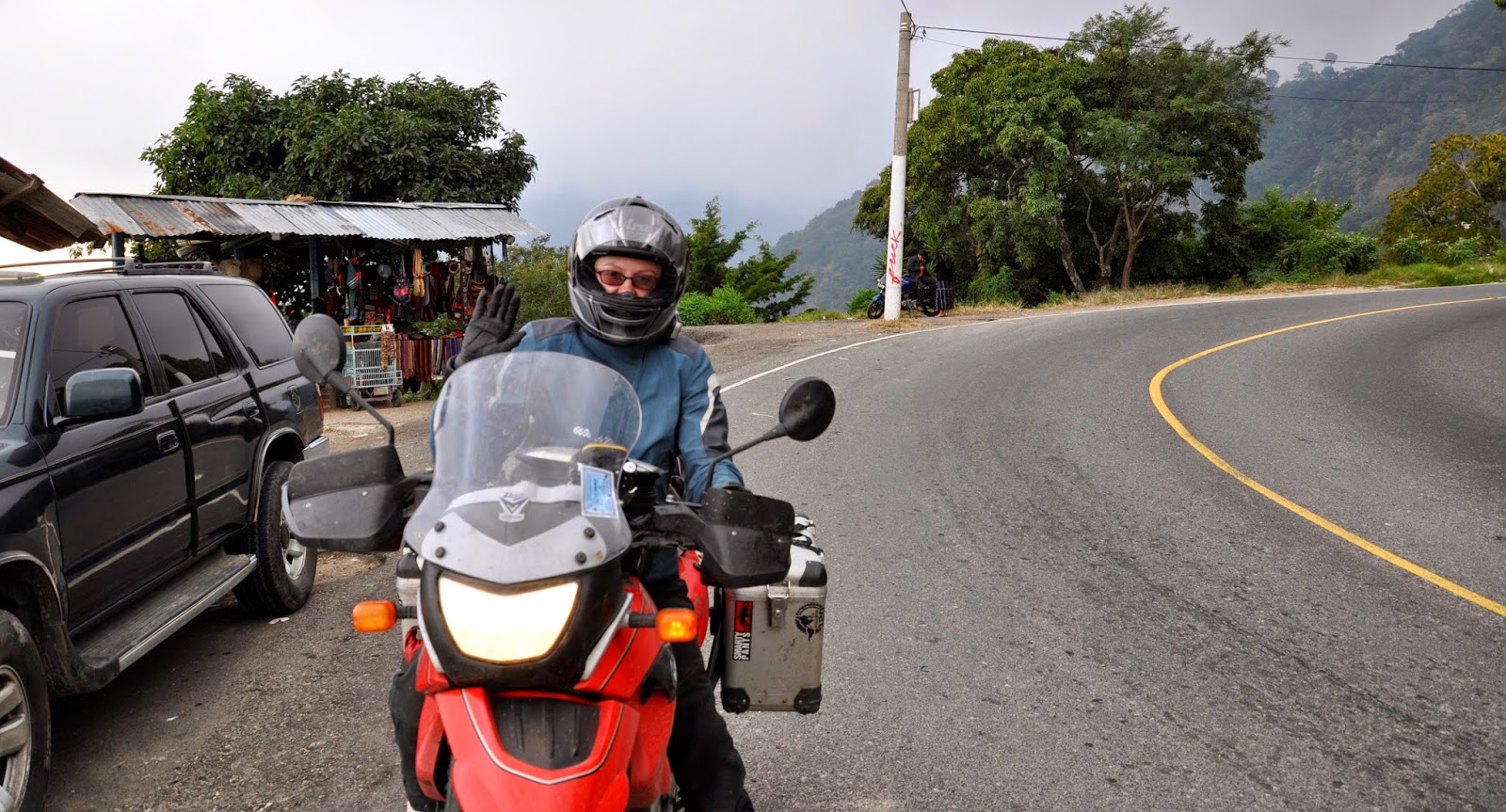 After getting through the usual border towns, we enter a lush canyon with a river flowing at the bottom and little houses dotting up the sides. The scenery is impressive, although we also have to always keep one eye glued to the road because the conditions are noticeably worse with frequent, severe potholes. Then, just as the road started to become more pothole than street, it turned into a veritable 4-lane raceway through the mountains! We reached the highest elevation so far on this trip: 9,700 feet above sea level. This highway was truly a treat, a curvy and perfectly paved surprise.

On recommendation from John in Palenque, our first destination was the little town Panajachel on the edge of Lake Atitlán. After the border, Roland took off for his own ride, and we weren't really sure when/if we'd see him again. But, after pulling into our chosen hotel for the night, who should come strolling by but Roland, of course! Guess our bikes are unique and kind of hard to miss. Lucky he happened by when he did, though, as the hotel owner let us park them in his locking storage unit for the night—very cool. So, it was the three of us again for an evening of street food and local beer. Good times.

We spent a lazy morning wandering Panajachel and scoping out Lake Atitlán and its surrounding volcanoes. Supposedly, there's a whole city underwater that fell in centuries ago. We'll have to check out the Discovery Channel when we get home, as they apparently made a documentary about it. While the lake was lovely, Panajachel itself was a bit touristy for our taste, and we felt we had to be on alert for people trying to take advantage of us gringos. We set our sights for Antigua and hoped for a richer taste of Guatemala, which we luckily found. 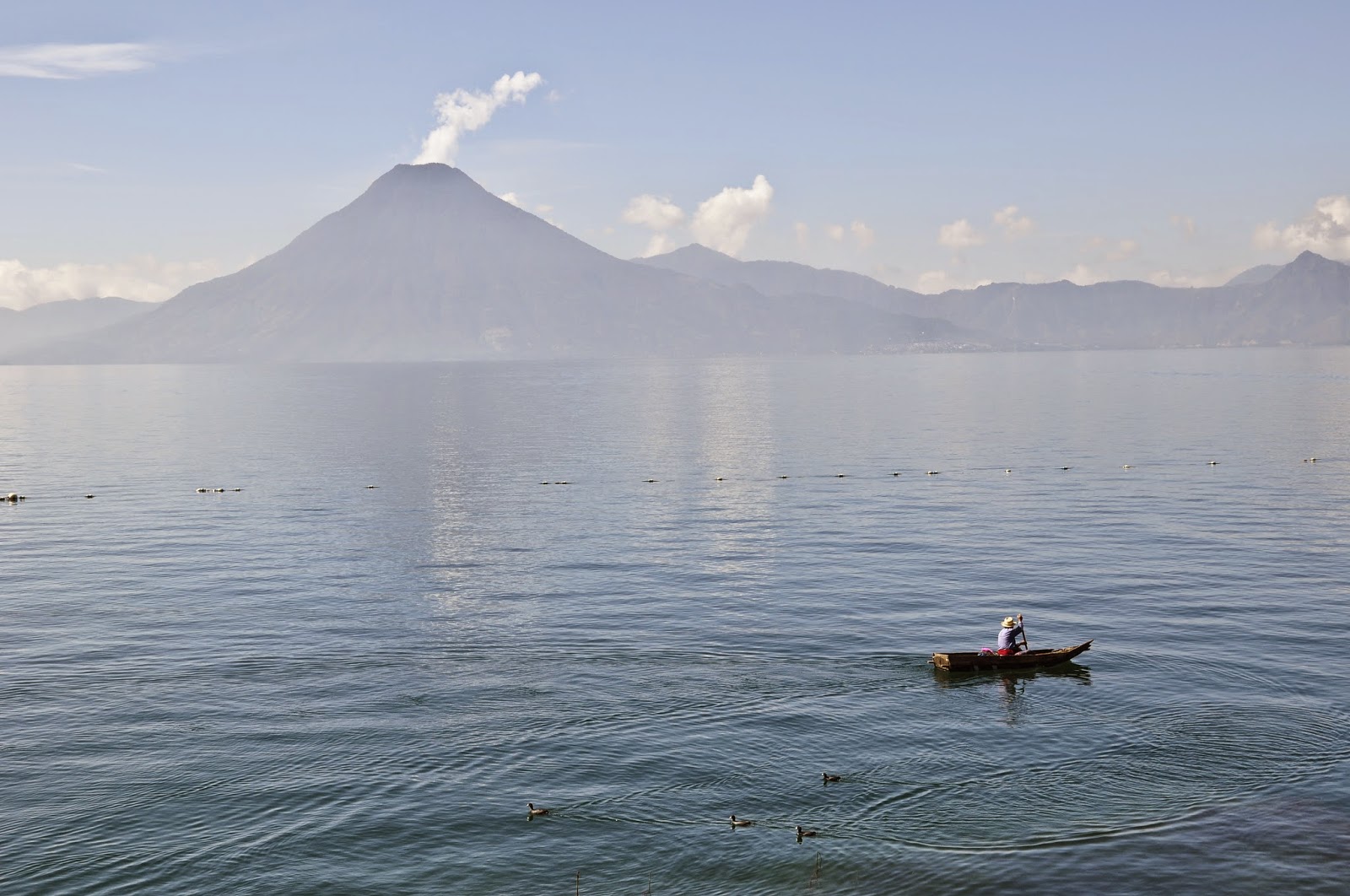 The route to Antigua, though, was an event in and of itself. What should've been a quick, 50-mile ride became a 2- or 3-hour affair. We followed a small mountain road back to the highway, which turned from asphalt to mostly patch to dirt… to a shallow river crossing! Everyone made it through without incident, and we had a good time doing it. 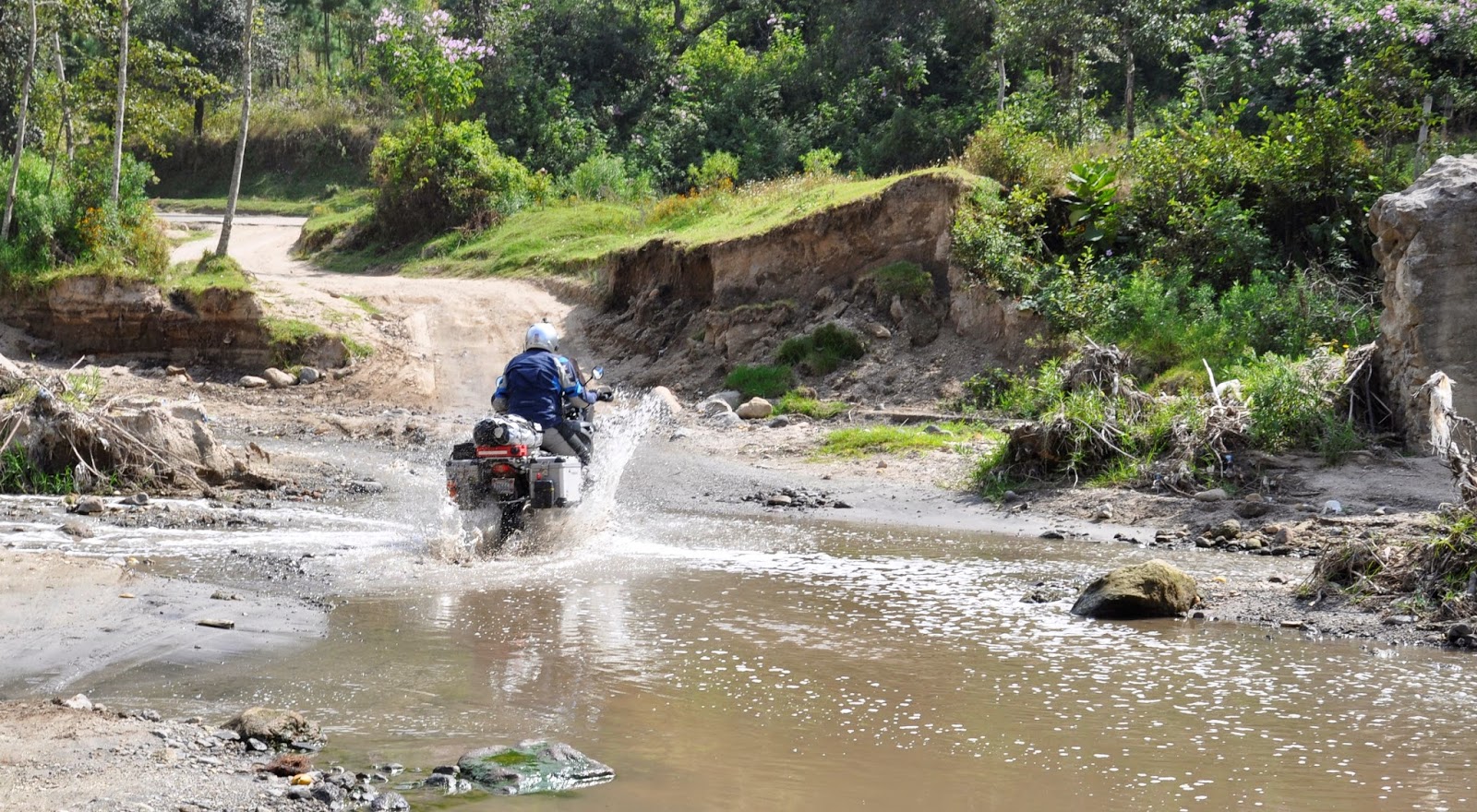 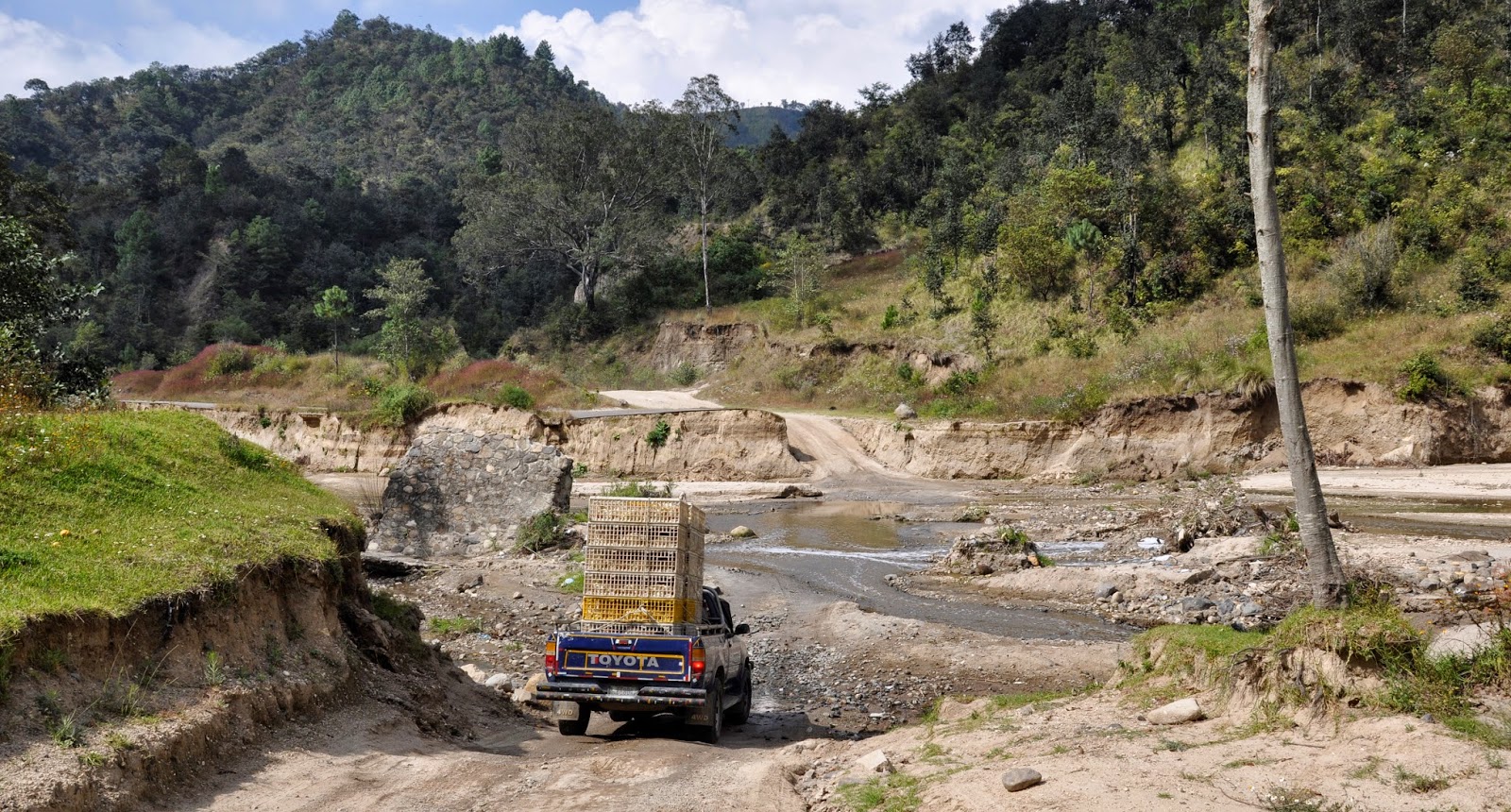 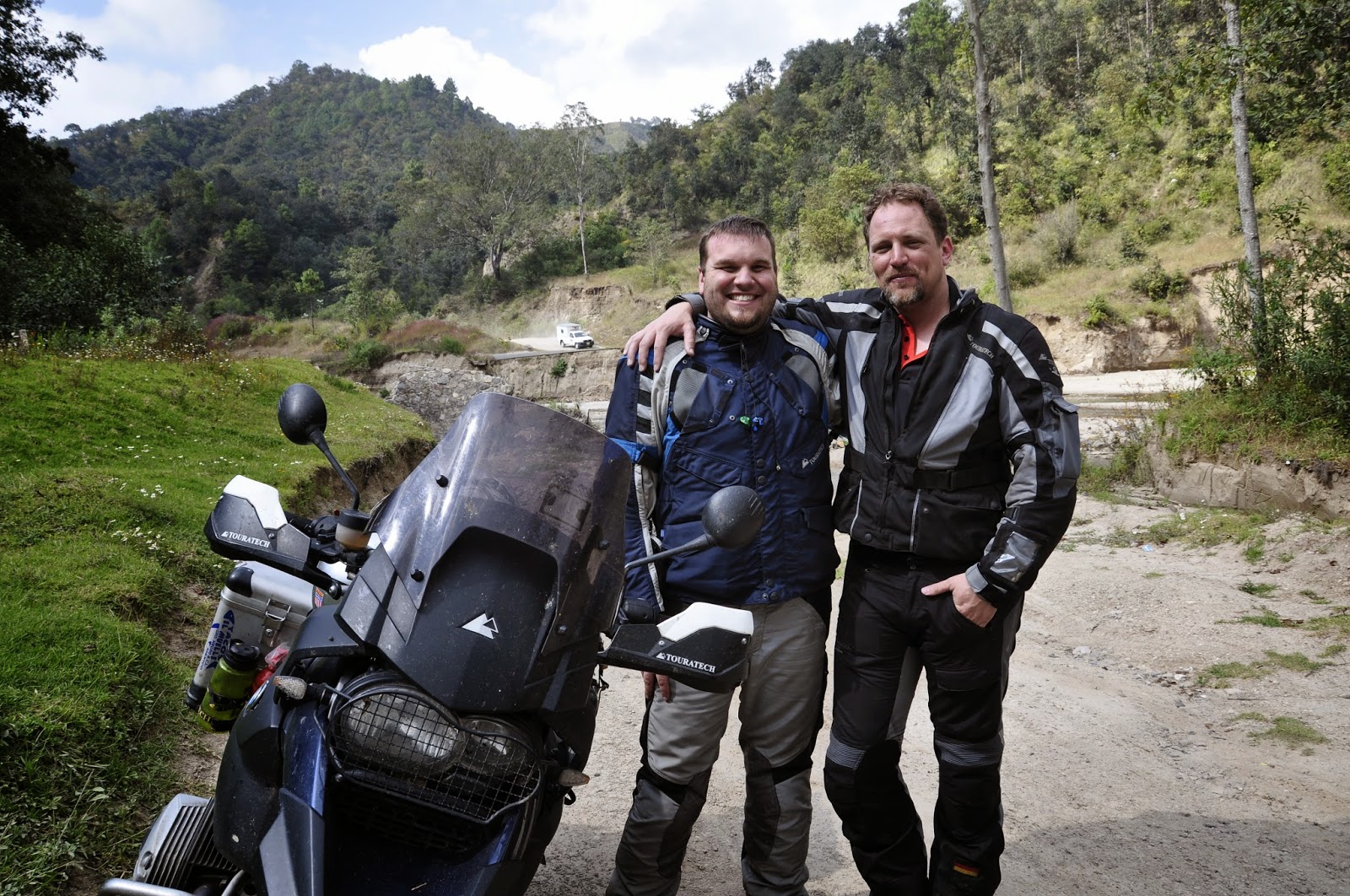 After that, road conditions improved considerably again, and we finished the rest of the route at a good clip. Along the way, we passed by a few different instances of large, outdoor pools where women went to hand wash their laundry and people took public baths. Very interesting! 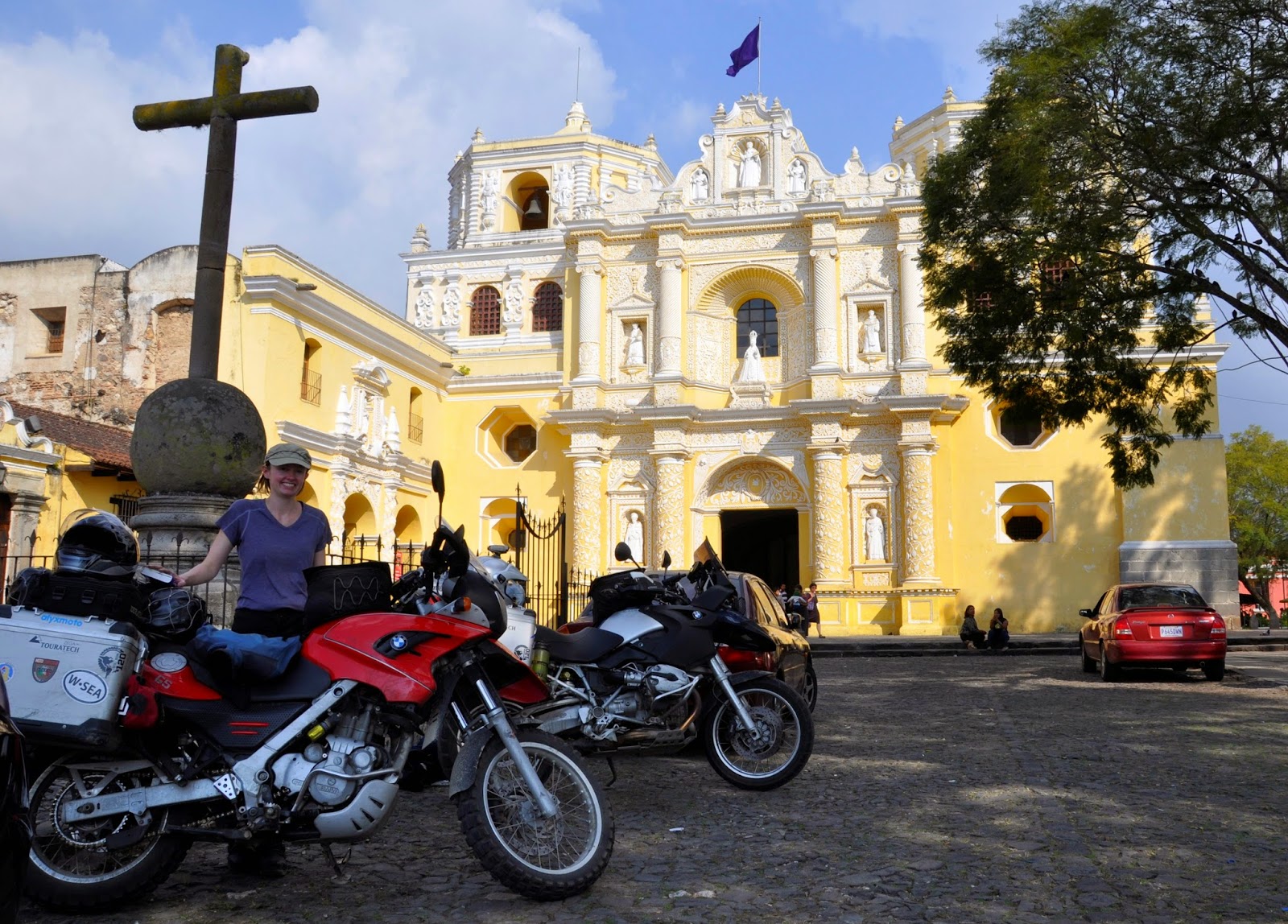 Antigua is a cool, old colonial town with interesting sites of rubble all over from the multitude of earthquakes it's experienced over the centuries. We even toured one main church that's been partially restored and partially left in shambles. 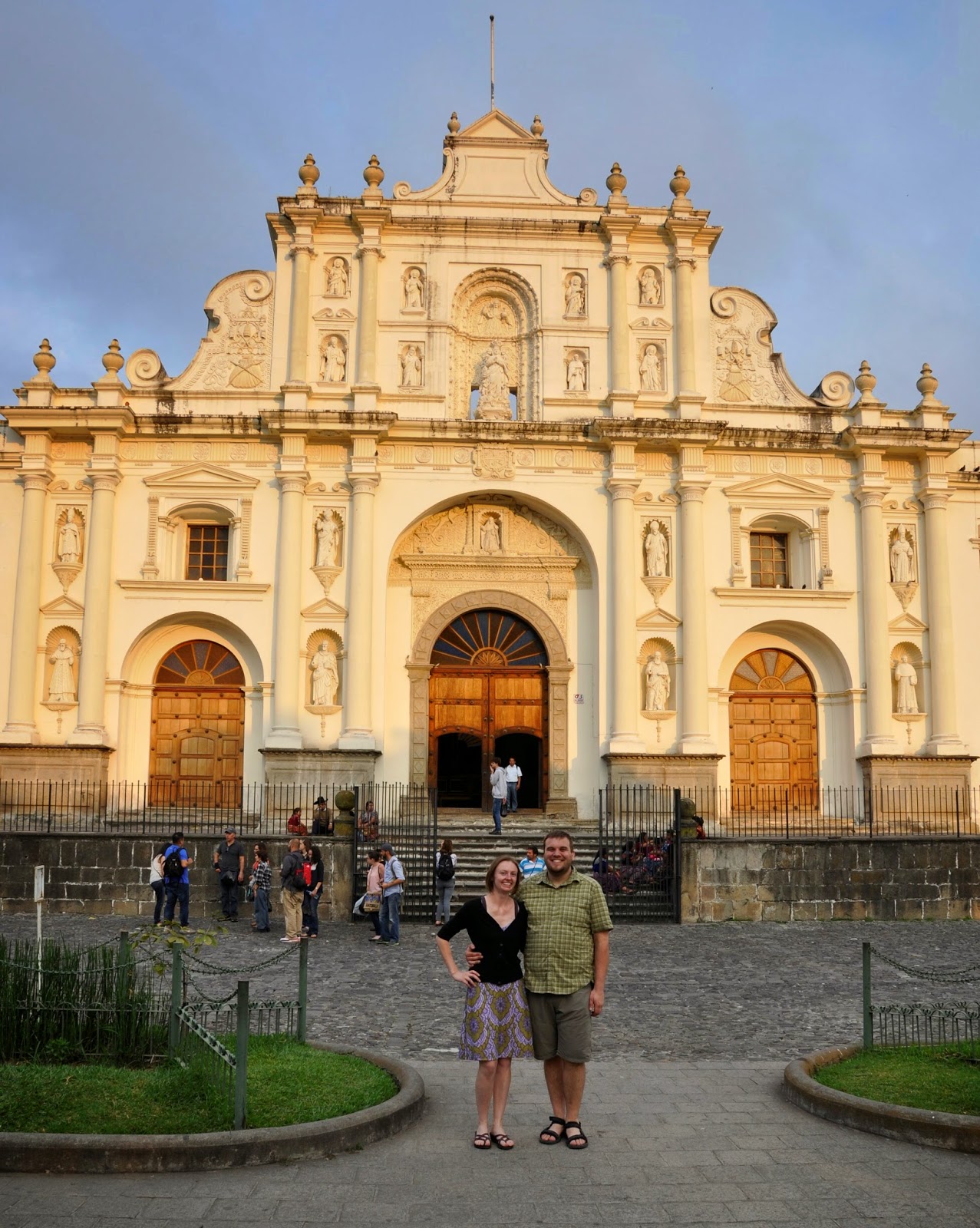 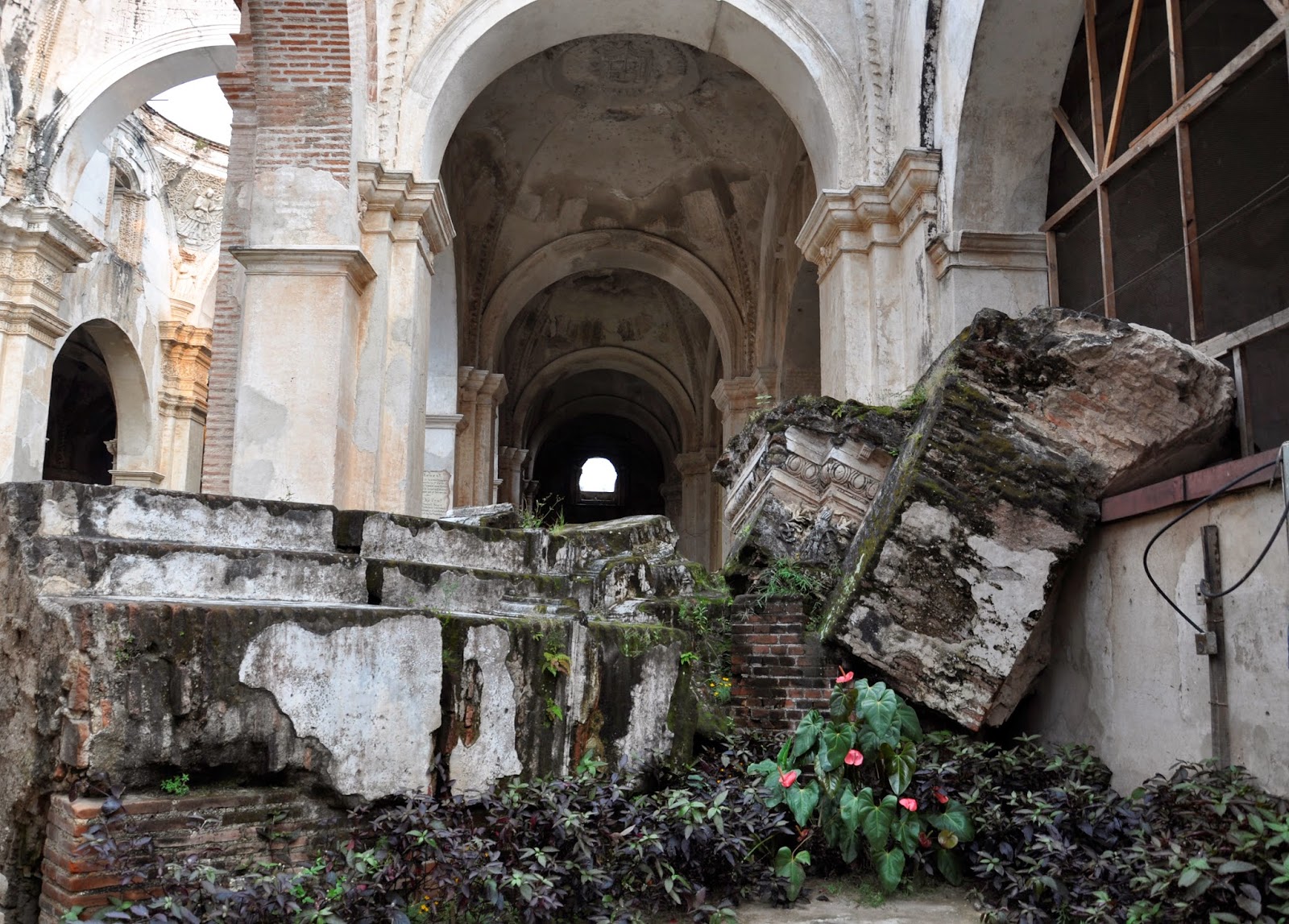 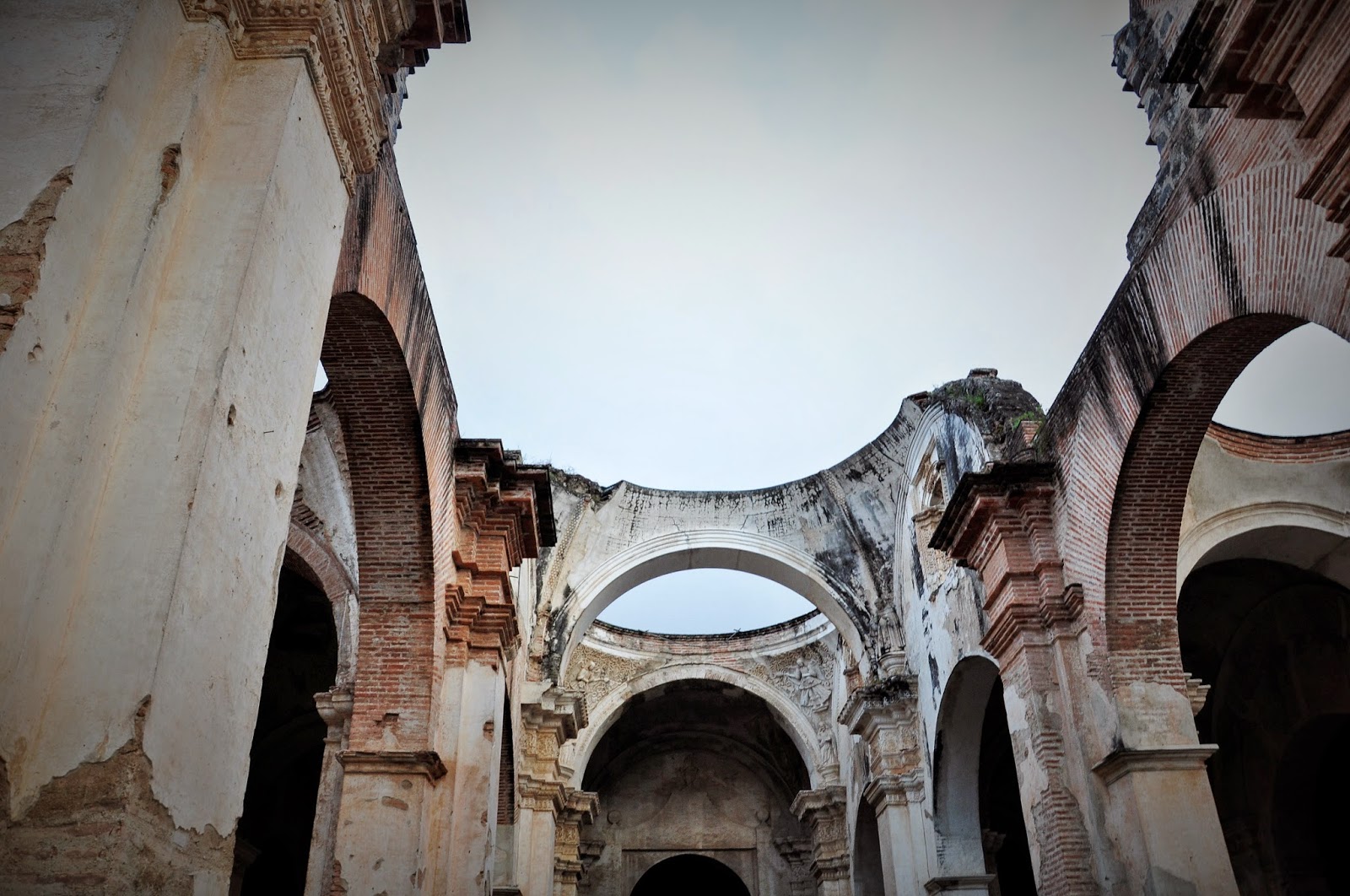 The whole town is a very interesting scene. After getting lost in one of the largest markets we've ever visited and grabbing dinner, we spent the evening chatting (read: practiced our Spanish) with our hostel manager and a local guy, learning about everything from Mayan football to cultural customs. The manager was incredibly gracious and helpful, and we highly recommend Hotel Mi Casa to anyone who finds themselves in Antigua! 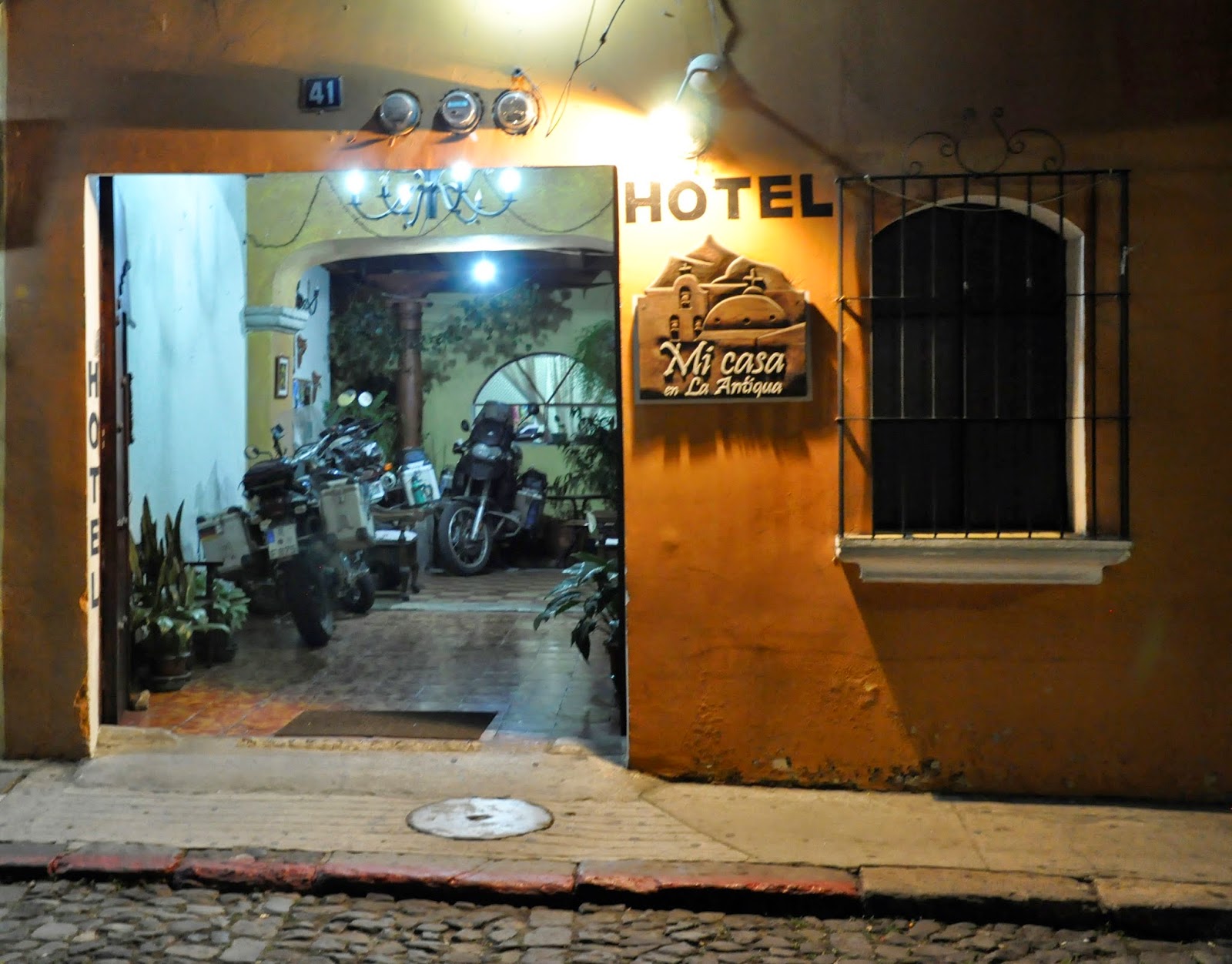 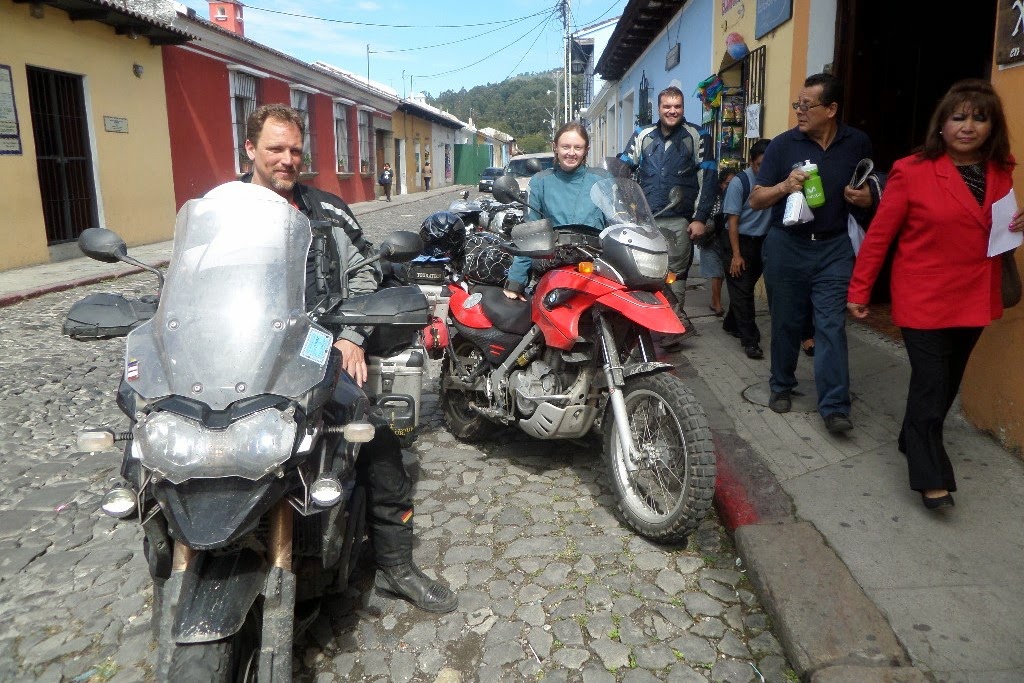 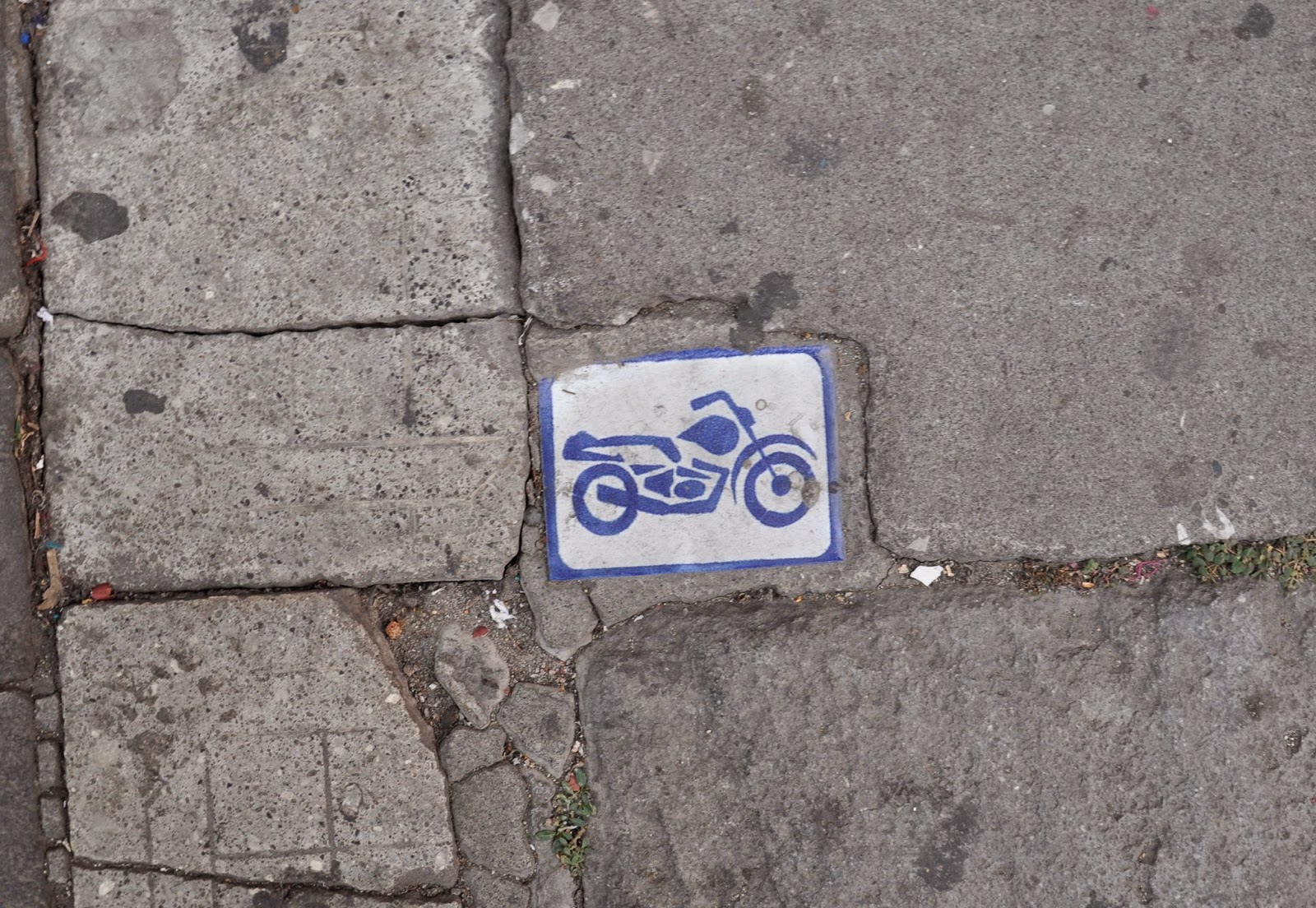 We originally planned to head close to the Honduran border from Antigua, but some bike maintenance issues brought us instead to the BMW dealership in Guatemala City. The 650 needed a few parts, and Roland needed new tires and brakes. 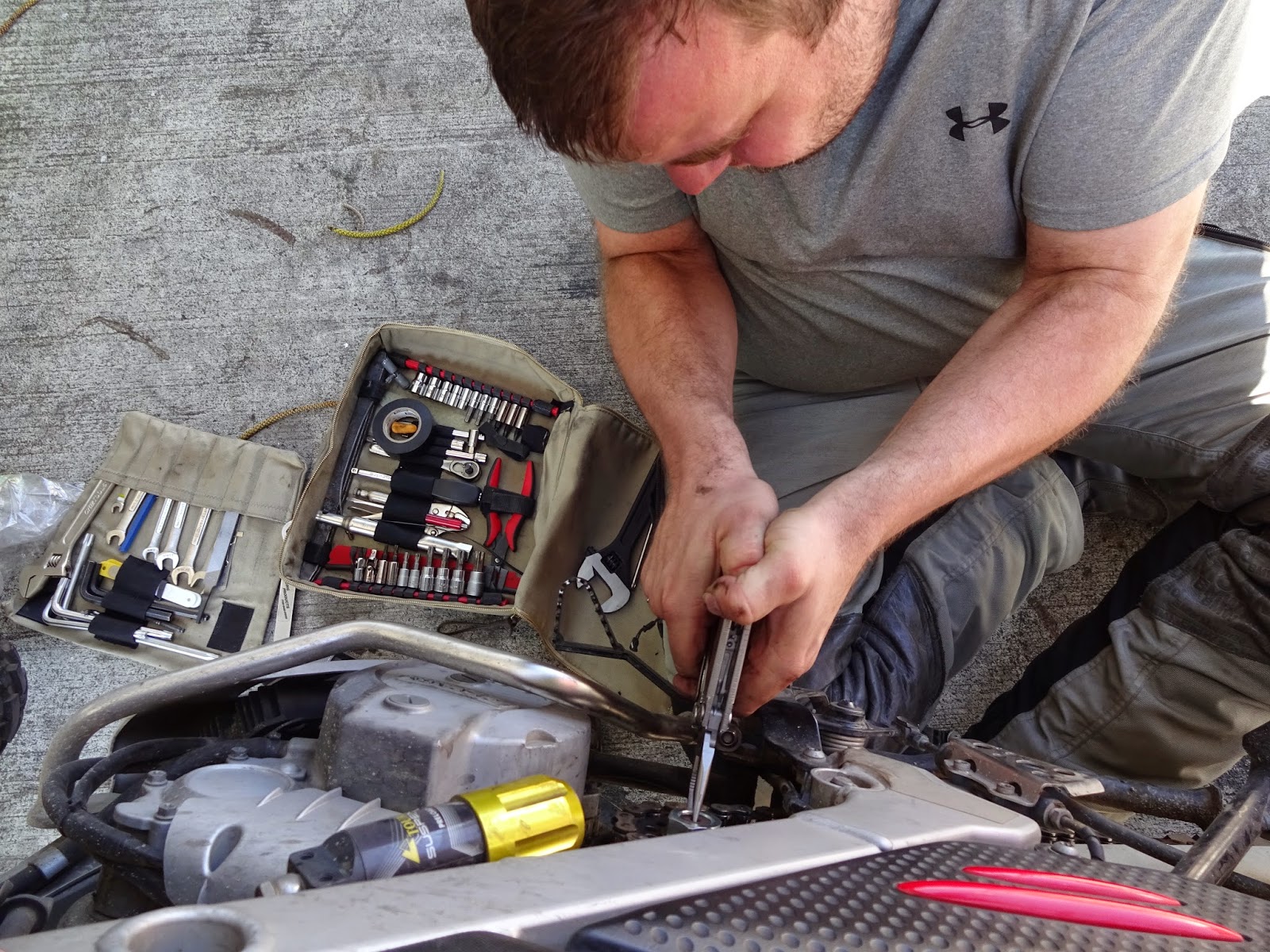 After all of that was taken care of and catching up with friends, most of the day was eaten up, so we ended up spending the night in the capital city. Finding a hotel that was budget-friendly and nearby was a bit of a challenge, but on a tip from a random lady on the street who was an excited fellow rider, we secured a place. Shortly after Roland chatted up the general manager of the place, we found ourselves with free beers in the lounge and ultimately a ride to the nearest ATM. The ATM wasn't far, but we were informed under no uncertain terms that walking was not an option. Evidently, Guatemala City is not as friendly as Antigua after dark. We were therefore thankful for the armed guards and locked gates of our hotel, and as a result, never experienced any safety concerns. 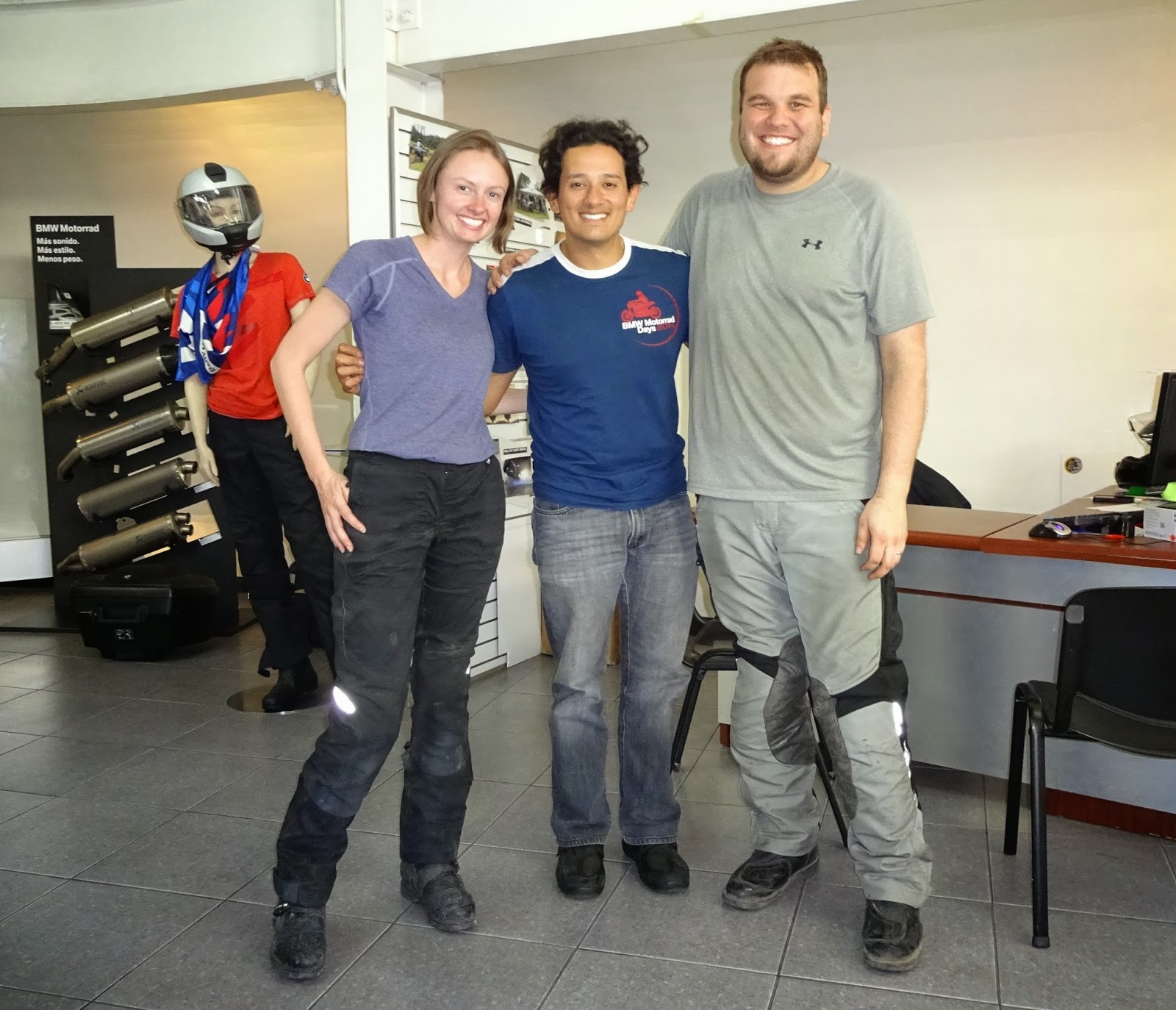 Thanks to our friend Jose at the BMW shop, we got a great route to leave the city and avoid most morning traffic. Also at the BMW shop, we met yet another motorcyclist headed to Tierra del Fuego who also happens to be registered on the same boat as Roland to get from Panama to Colombia. So, off all four of us set for the Guatemala-Honduras border. Heavy rains overnight led to several mudslides along the highway. At one point, all traffic was stopped by road crews cleared a section that was completely washed out. Another section was detoured into oncoming traffic lanes with just a sign at the beginning and a half tire or cone every once in awhile as indicators. That seems a bit minimalistic by US standards, but all the traffic reacted calmly and appropriately, so this is obviously par for the course in these parts. 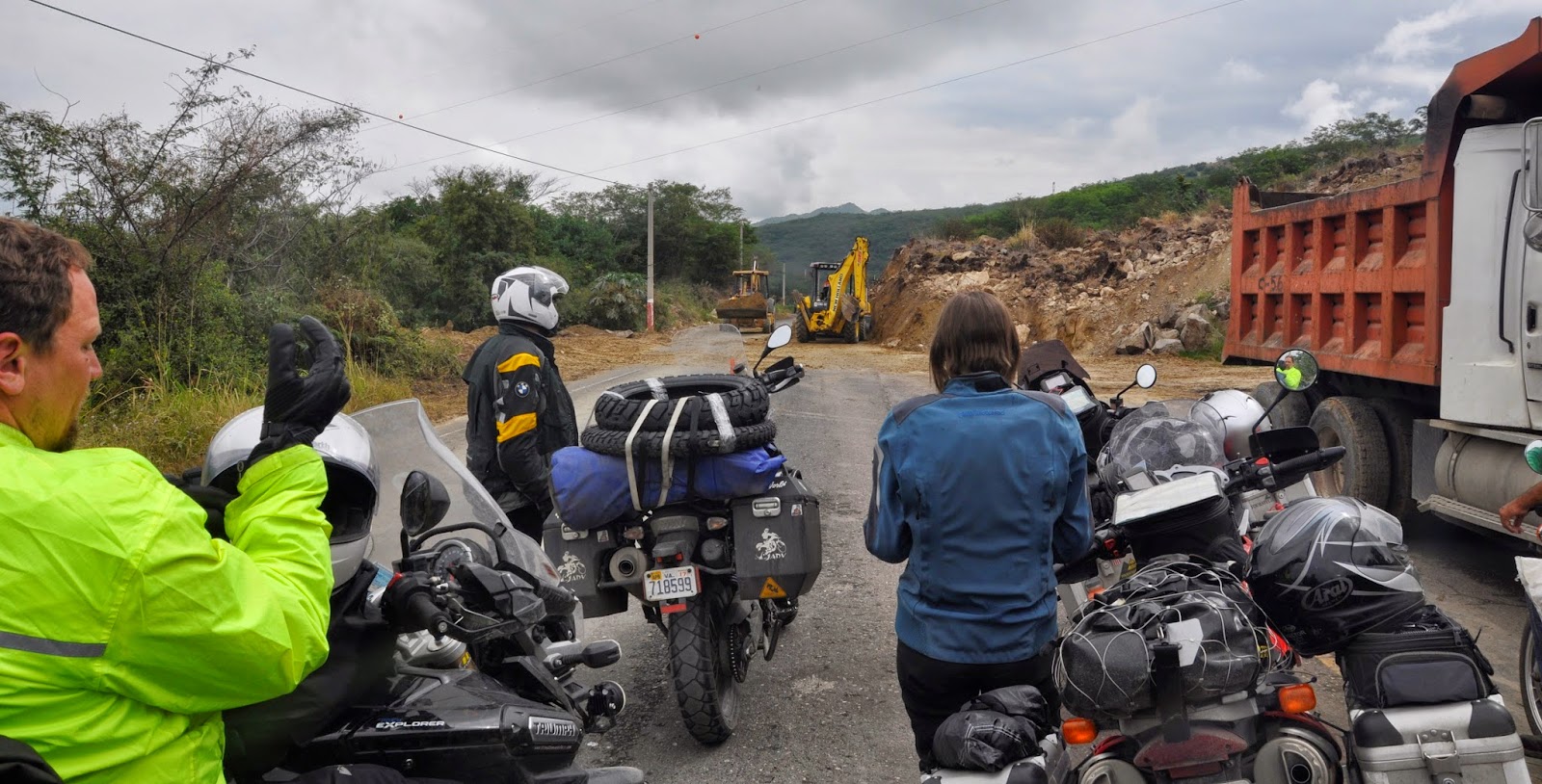 By noon, we made it to the border for the next installment of our Latin American adventure!
Posted by Brayde at 10:00 AM