After our rest day in Huatulco, we have a quick breakfast of dried fruit and some pan dulce we picked up the night before at the market. We hit the road early with the goal of making it to San Cristobal de las Casas in the state of Chiapas, Mexico. The route along the Pacific coast was very nice, but we were warned by a friend that it could get extremely windy. In fact, there is even a city named La Ventosa, which translates to "the windy" in English. Well, after almost getting blown off the road several times, and literally getting blown over at a standstill, we decided to do as the truckers were doing and take refuge under the next overpass with hopes that the wind would calm down over time. We have ridden in a lot of wind, but never like this.

After two hours of waiting under the overpass, the wind wasn't getting any better. Pretty soon, a taxi driver notices us and pulled over to talk. He informs us that it has been this windy for days and will only get worse as it gets later in the day, and advises us that it isn't smart to wait there. He says there's another road that follows the base of the hills and the air is calmer there. He then leads us with his car for about 3 or 4 miles down a little dirt road that eventually leads back to a better section of the highway. He refused any payment and wished us a great journey. Looking back on it, this guy really saved our hides.


The wind was still an issue, and after such a long delay, we decided to give up on the idea of making it to San Cristobal that day. We found a place to stay in Tonalá and immediately after checking in, Brayde got very sick to the stomach. After several hours of that, I became just about as sick. This was clearly Montezuma's revenge, probably from the dried fruit in the morning, or possibly the tacos we had for lunch. It was only a matter of time. Without going into any details, we were both incapacitated for about a day and a half, not really able to leave the hotel room. We drank nothing but Gatorade and water, ate nothing but saltine crackers. Luckily, we had prescription strength "traveler's diarrhea" medicine that worked wonders. After two days in Tonalá we were feeling a little better and even though pretty weak, decided to put in a short day of riding.

Upon entering the Mexican state of Chiapas, we could sense some political tension. We had to weave our way through a couple protests and roadblocks that were backing up the highways for many miles in both directions. The weird thing is that it never felt unsafe or threatening, and the protesters were perfectly fine letting motorcyclists through while blocking all the trucks, cars, and buses.

We arrived in San Cristobal de las Casas in the late afternoon and could understand why everyone speaks so highly of it. It had the same bright yellows, reds, and oranges of many of the other colonial cities we've been through in Mexico, but it had a different kind of "mountain town" charm with a little more rustic architecture. 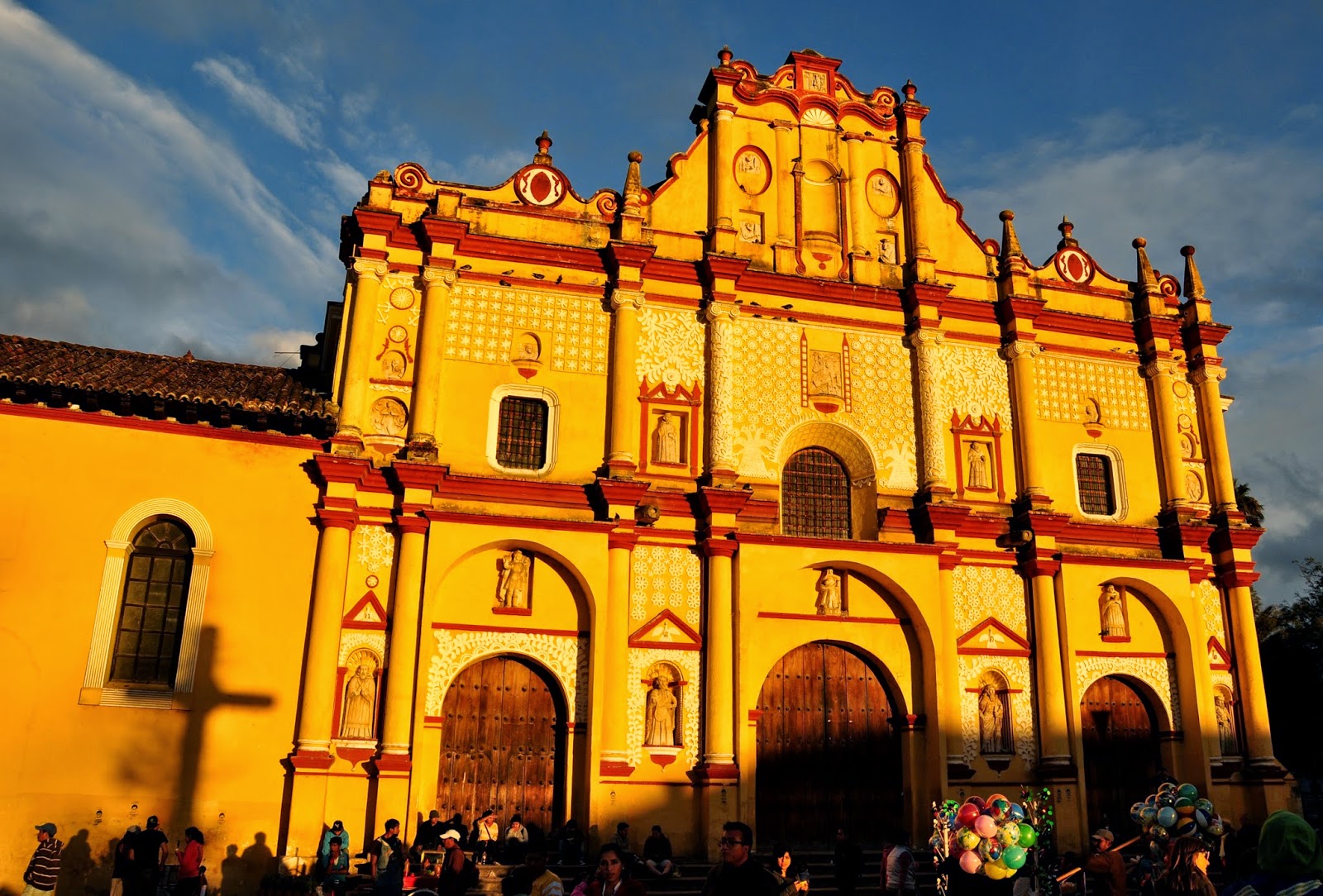 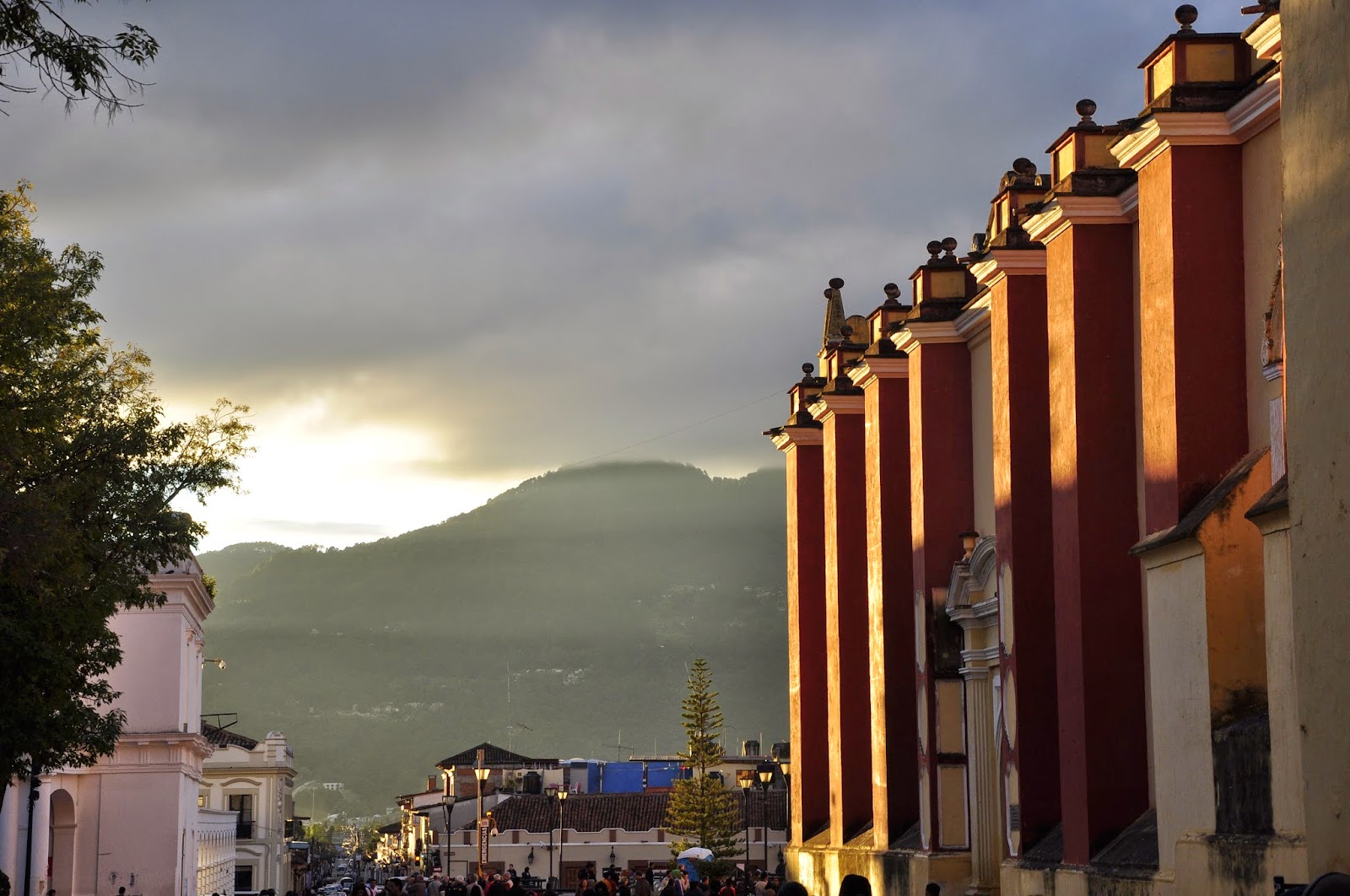 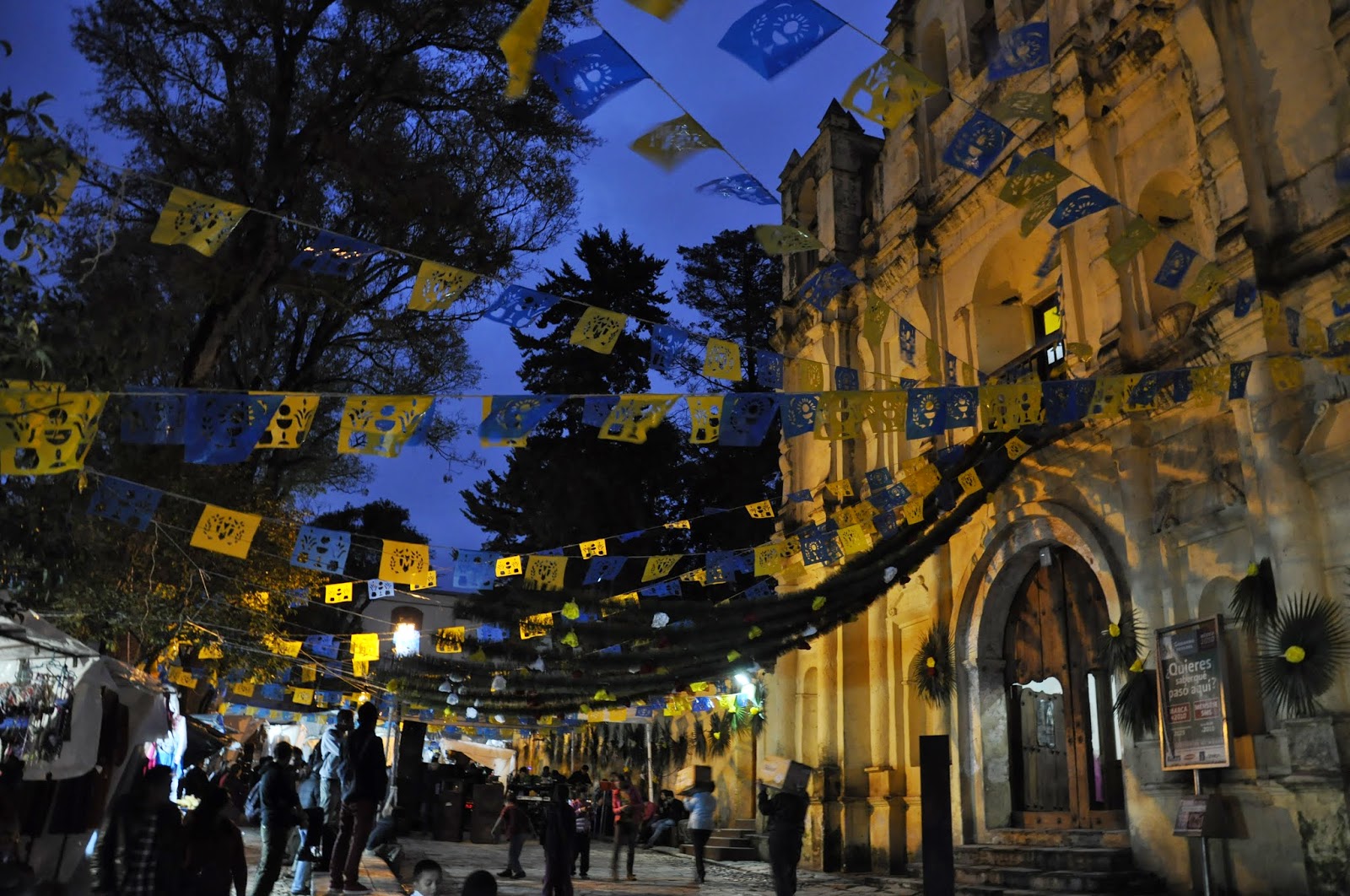 There were a few more political rallies, and we learned that that day was the holiday celebrating the Mexican Revolution. Again, despite the political excitement with heavy police presence and news of a burning OXXO convenience store, everyone was nice, and we never felt in danger. We were able to have a nice dinner and visit the market before getting a good night's sleep in hope of beating the last of the sickness. 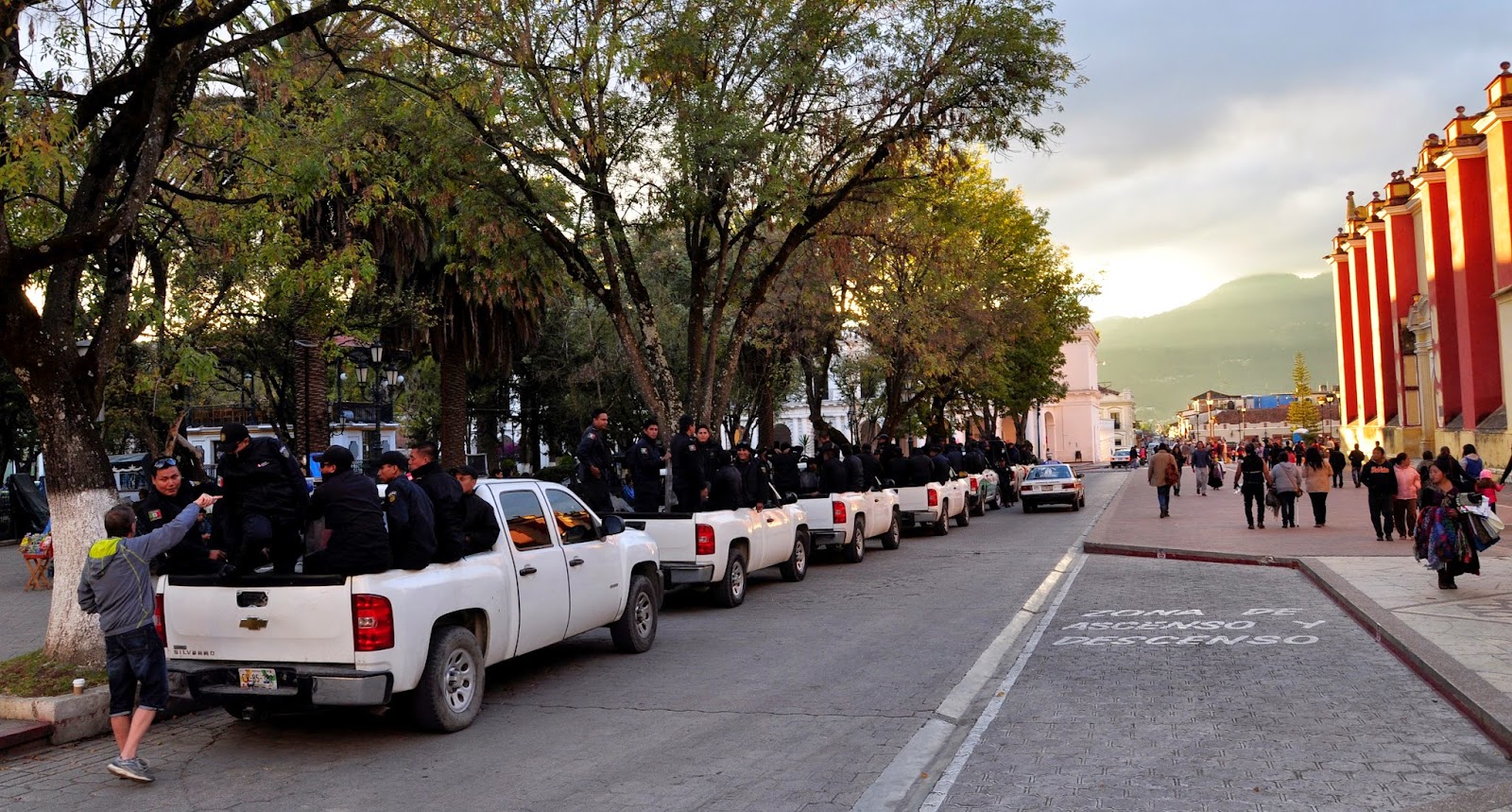 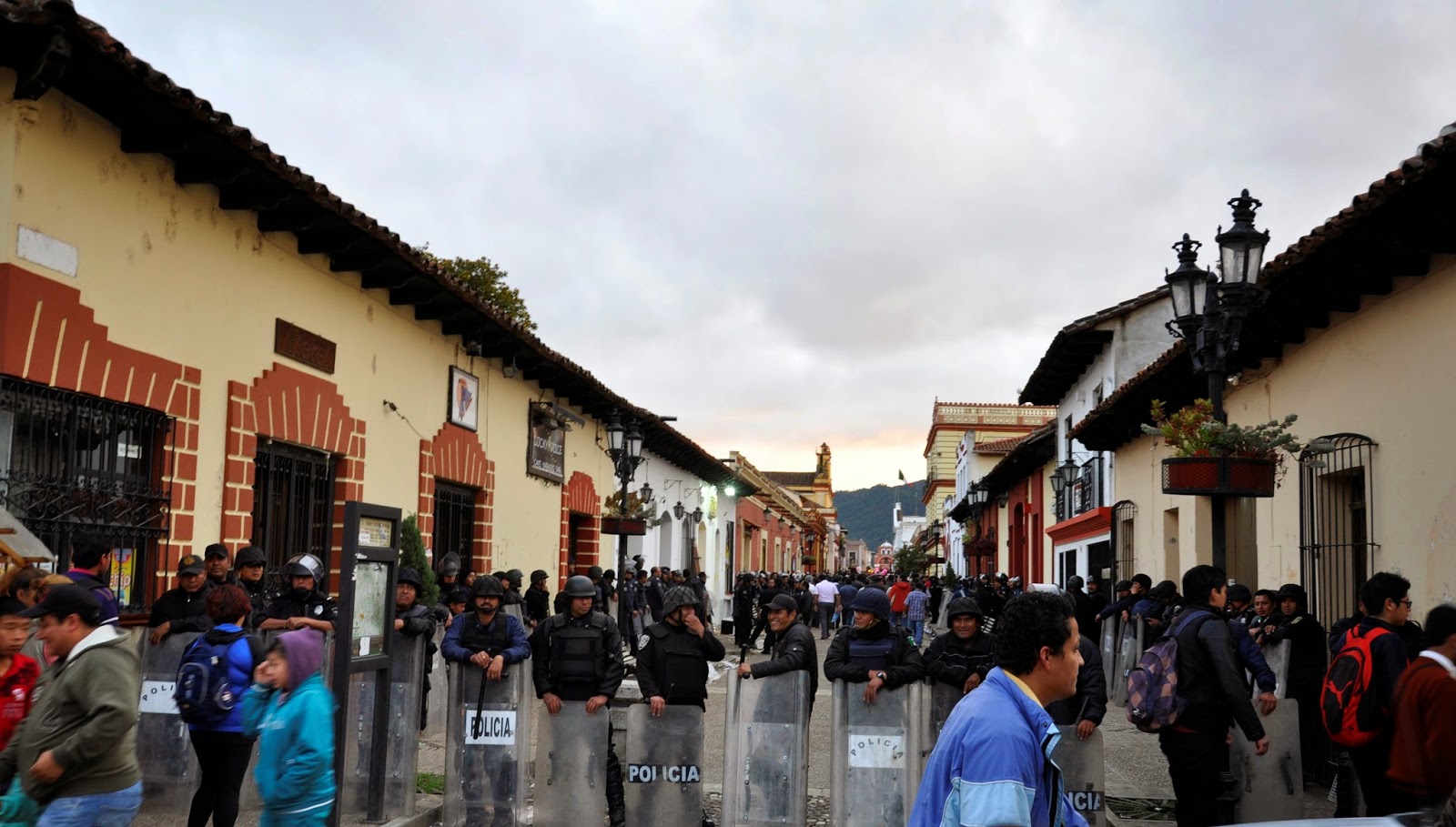 In the morning, we started on what we thought would be a short, half-day ride to the famous ruins at Palenque.The road turned out to be extremely twisty, remote, and rough with a lot of truck traffic and landslides to ride around. It was a beautiful ride that wound through the mountains of Chiapas and ended up taking us about 4 hours to get to Palenque.

We found a cheap hostel in the La Cañada neighborhood of Palenque, unpacked the bikes, then quickly rode them up to the ruins to get some pictures before dark. Unfortunately, upon arriving, we discovered that we only had 15 minutes until they closed. So, we walked around a bit and decided to return first thing in the morning to get the most out of it. After all, we rode about 4 hours out of our way to get there. In the parking lot of the ruins, we ran into Roland, a German motorcycle traveler that I had actually met in Seattle a couple months before. Small world! On the way down from the ruins, we bumped into yet another motorcyclist from the Seattle area, John, who had just spent a couple months in Guatemala and Mexico and was making his way back north. They both followed us back to the hostel, where we spent the night sharing travel stories over beers. These were the first travelers we had run into and it was kinda nice to compare notes. 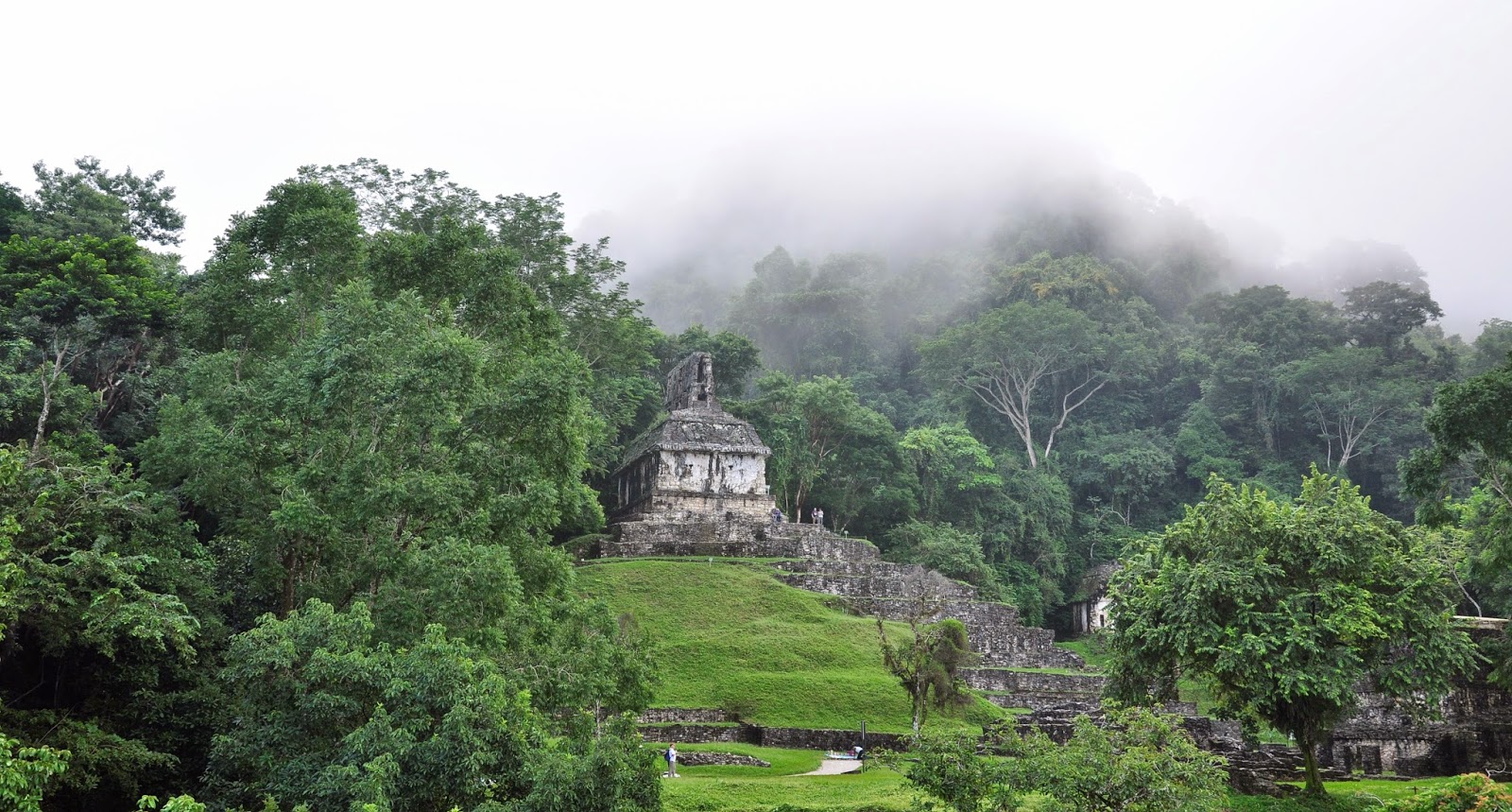 Returning to our room, Brayde found one of the biggest spiders we've seen outside of the zoo, and it was on the floor next to our boots. It looked like a mini-tarantula and we really didn't know what to do with it. It was much too big to smash with a shoe, and we didn't know if it was dangerous. We asked the front desk guy if it was an issue, and he came by with a broom and just swept it out of the room after laughing about it. 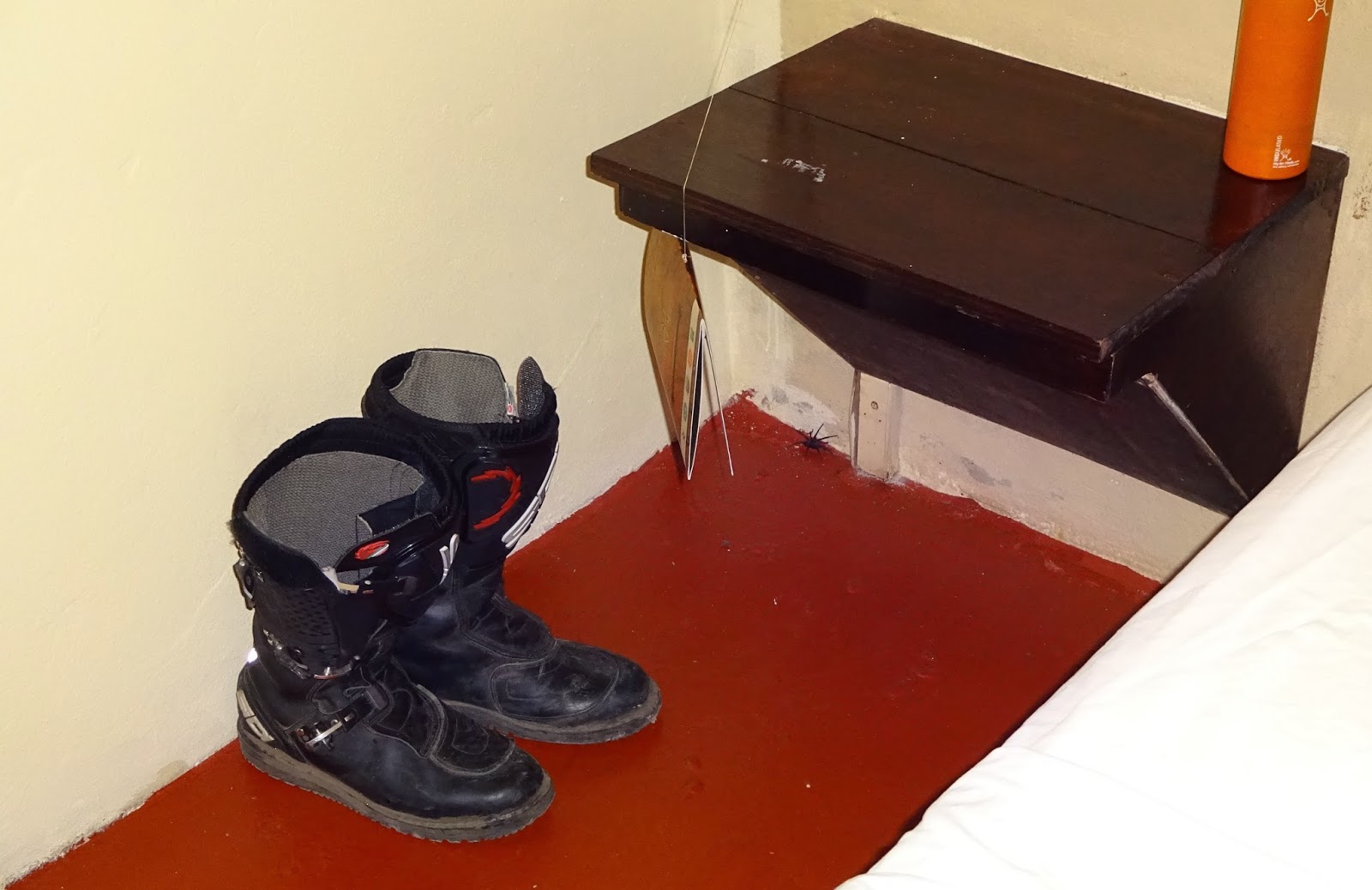 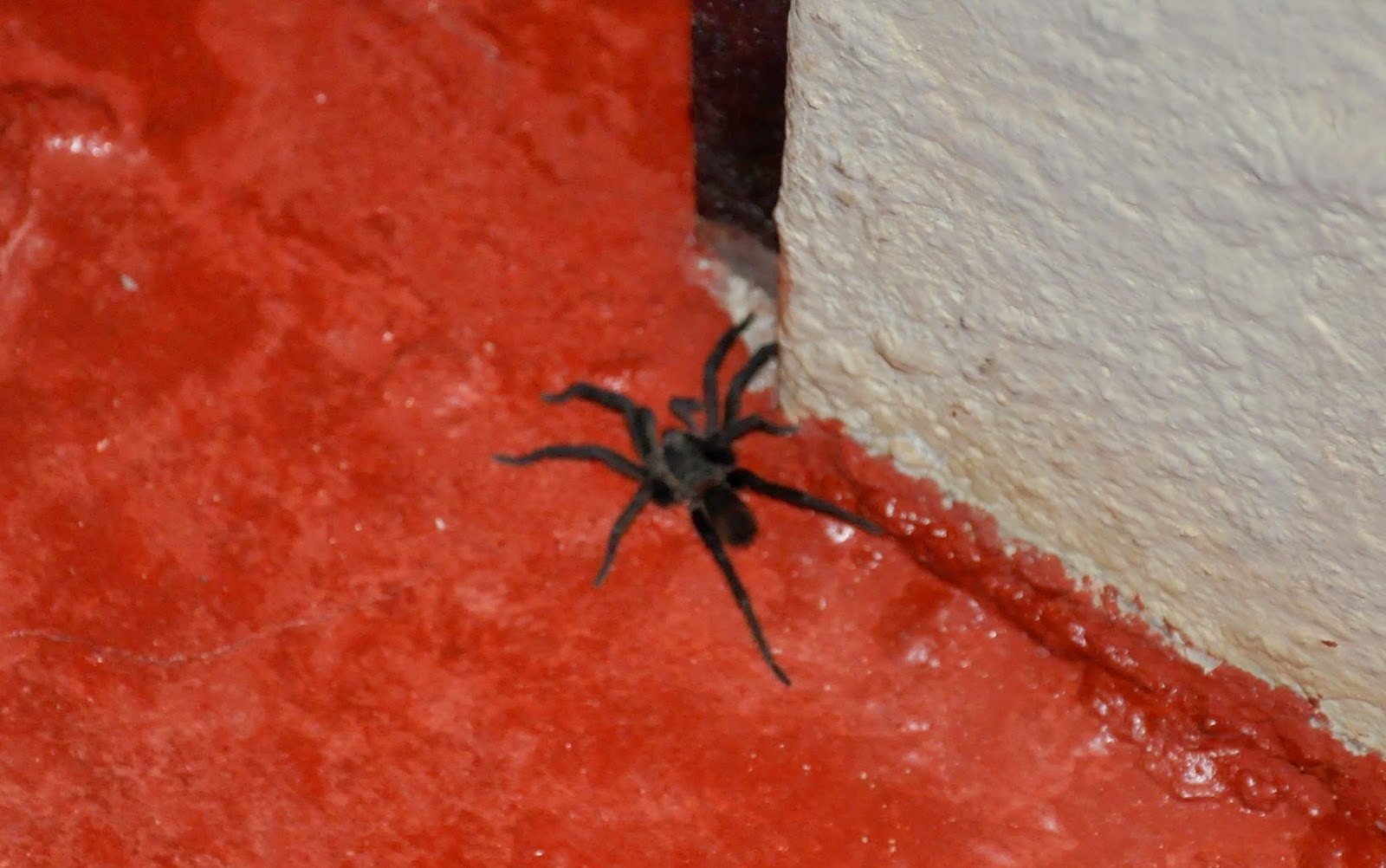 We got up early in the morning and took a mini-bus back to the ruins. Palenque is home to some of the most impressive Mayan ruins in Mexico, built around the 300 AD and lasting through 800 AD. The complex was complete with a palace, several temples, village-style living quarters, a game court, and directed running water. And that's just what they've uncovered so far; there's still tons yet to be excavated. It was impressive just how big everything was, and the history of it all. We got some good pictures, did some hiking to a waterfall, and caught another bus back to the hostel. 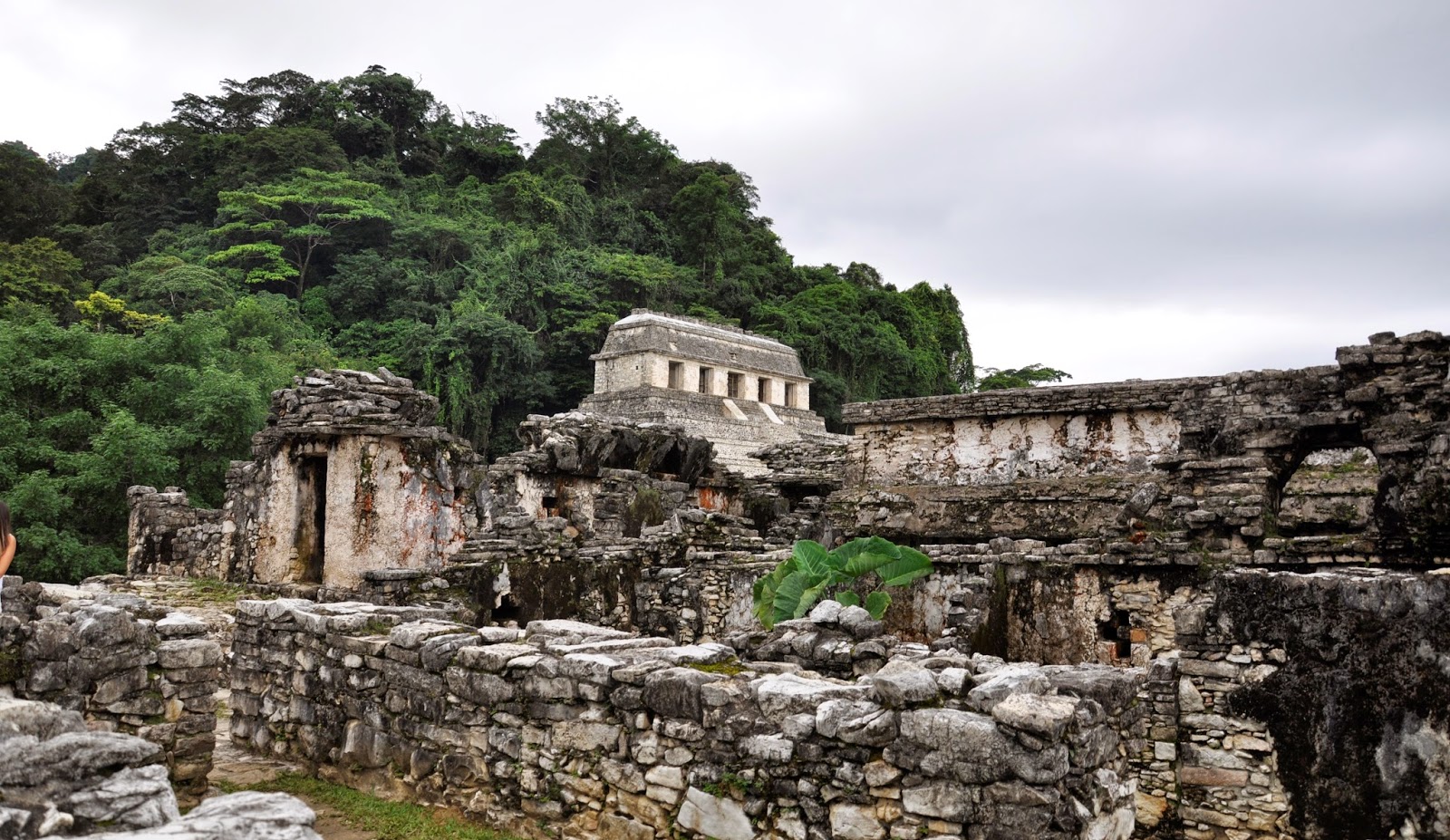 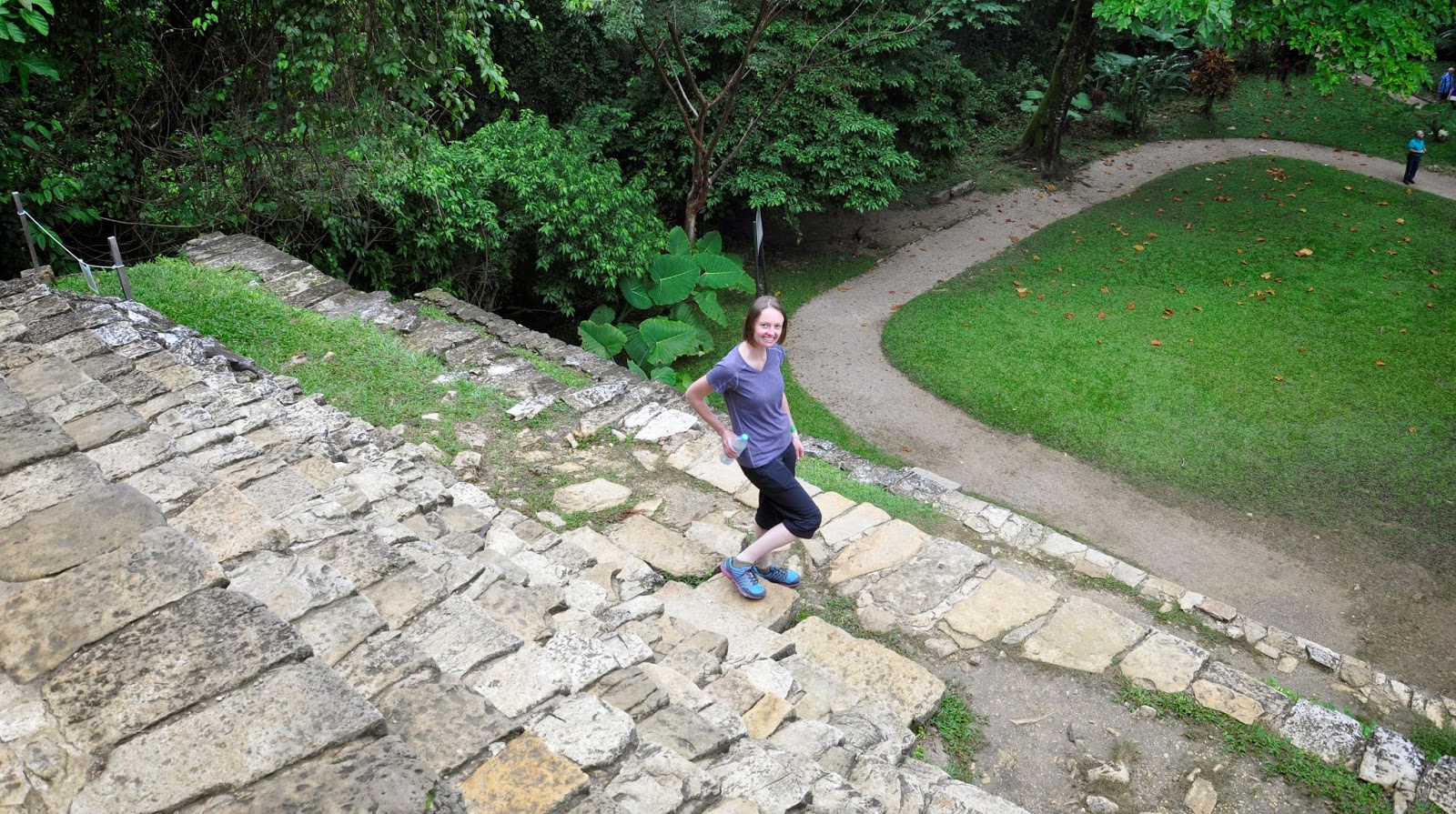 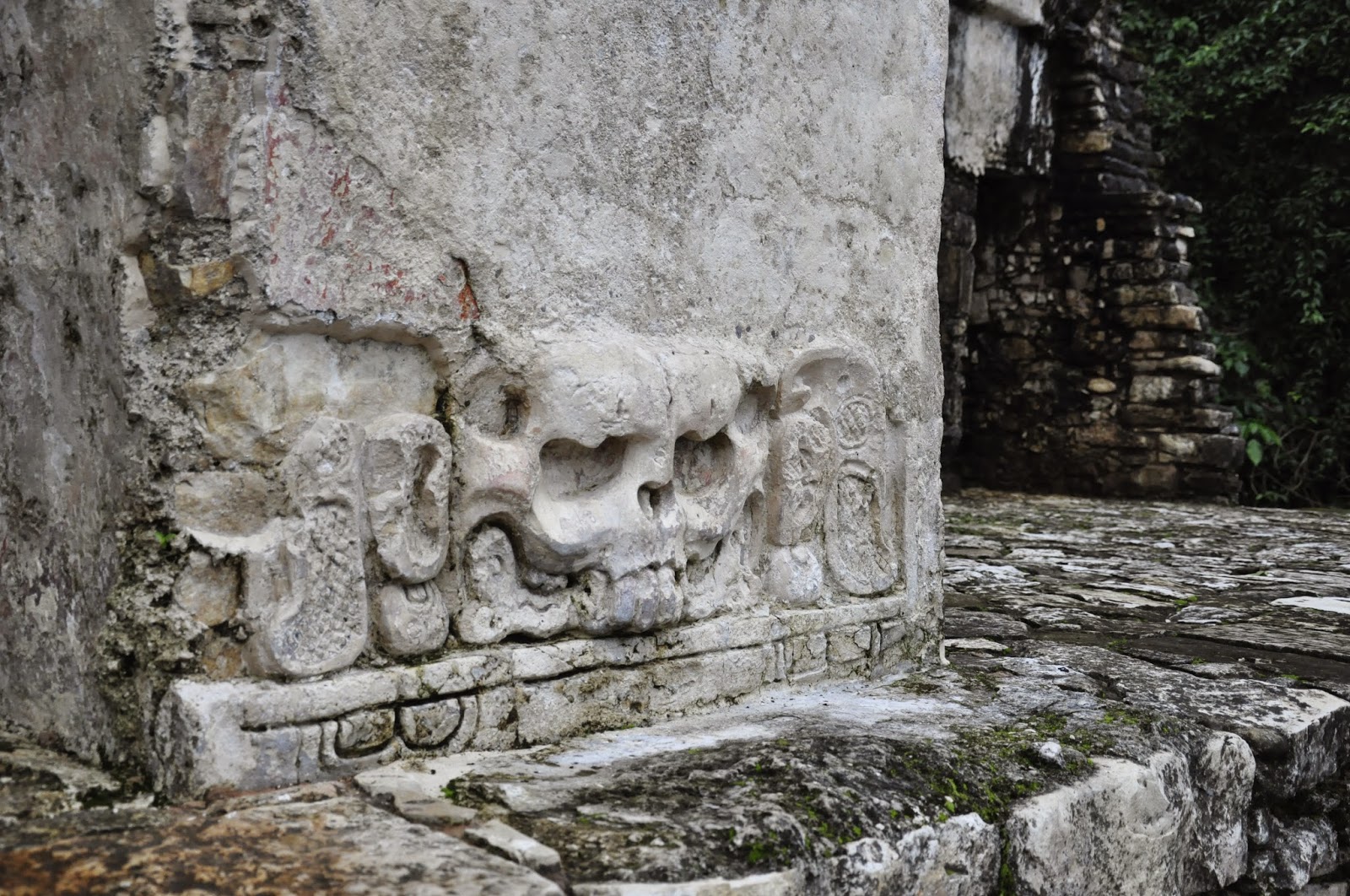 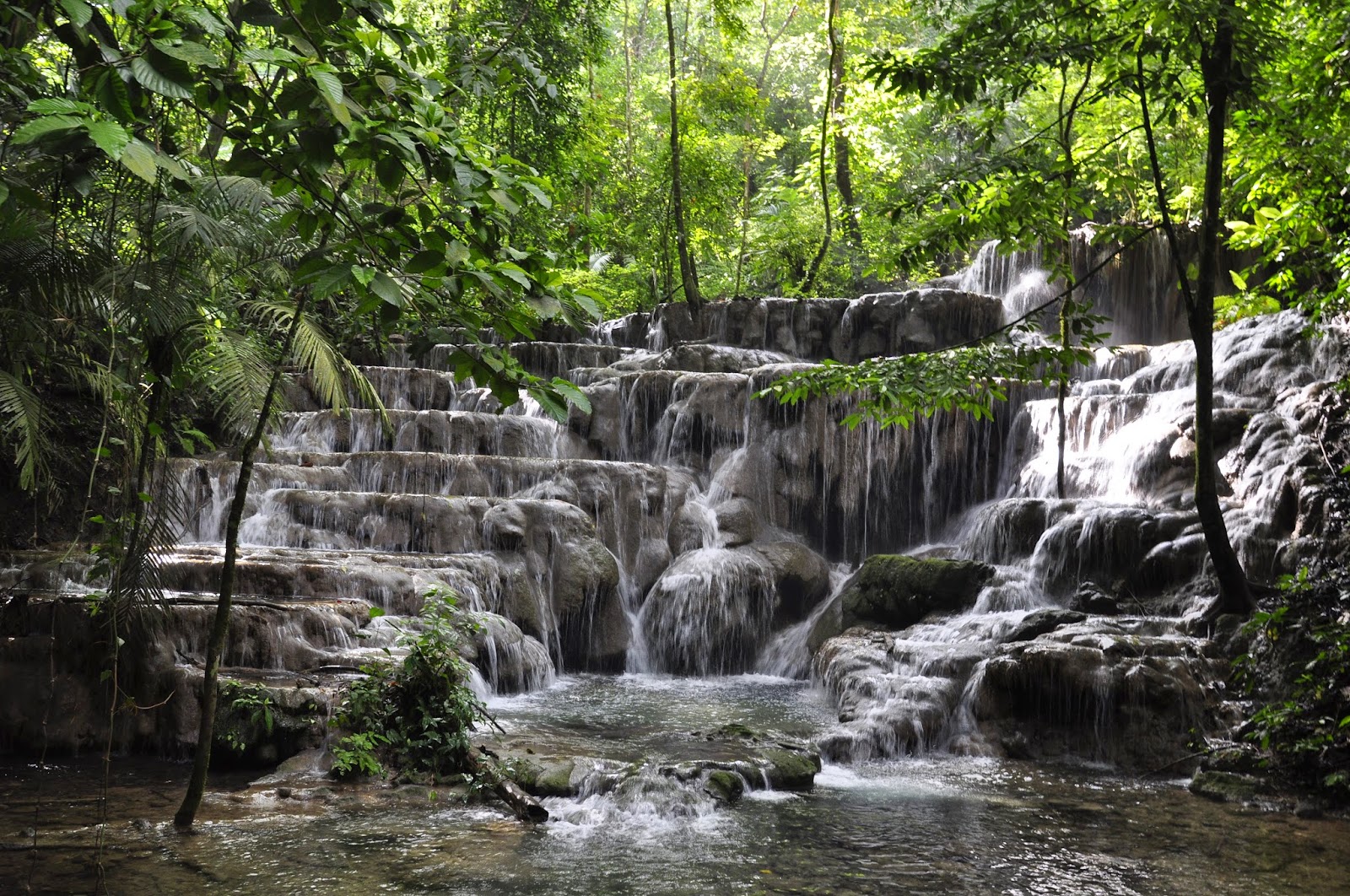 Our goal for this day was to make it to the city of Comitán, which would put us in a good location to cross the Guatemala border the next morning. The route from Palenque to Comitán doubled back on about half of the road from the day before, then split off on an equally great but rough road. After all these rough Chiapas roads, we were very thankful for good suspension on our heavily loaded bikes. One thing we noticed along the route was groups of people washing clothes and bathing in roadside creeks. They also left their laundry out to dry along the guardrails. About 45 minutes outside of Comitán, we bump into Roland once again, this time on the side of the road taking a break with a Coke. Our plans for the next day line up, so we decide to all ride together into Comitán and then cross the border in the morning. Roland is a good negotiator and ends up getting us all a great deal on a couple rooms in Comitán. The next day, we get up early and cross our first Central American border. This should be interesting.