Naturally, one of the big milestones for this trip is crossing the equator. Neither of us has been in the southern hemisphere before, so it's a highlight for us. We were so close to it in Otovalo that it didn't take long to arrive at "the" point when we got back on the road after Christmas. 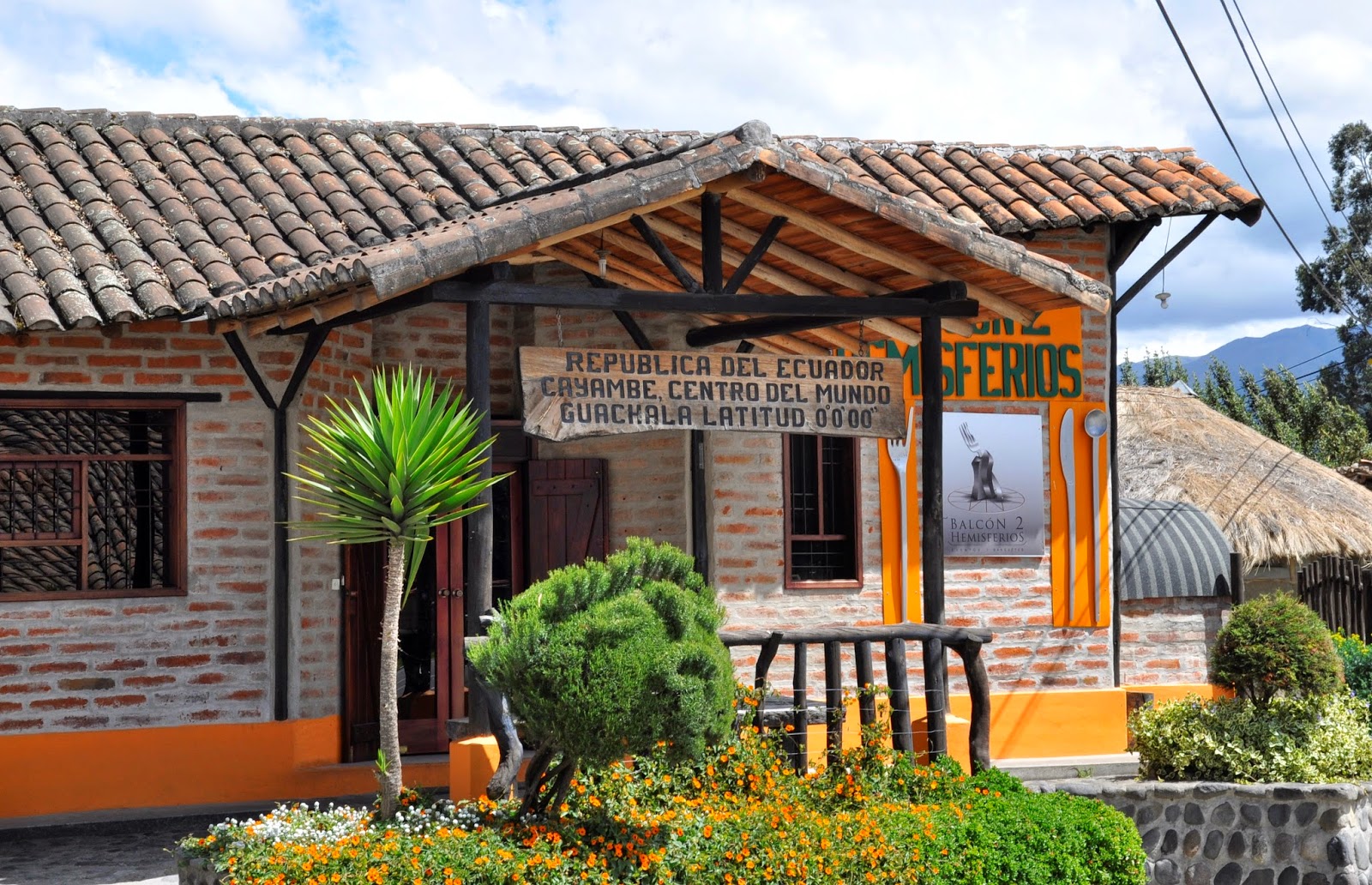 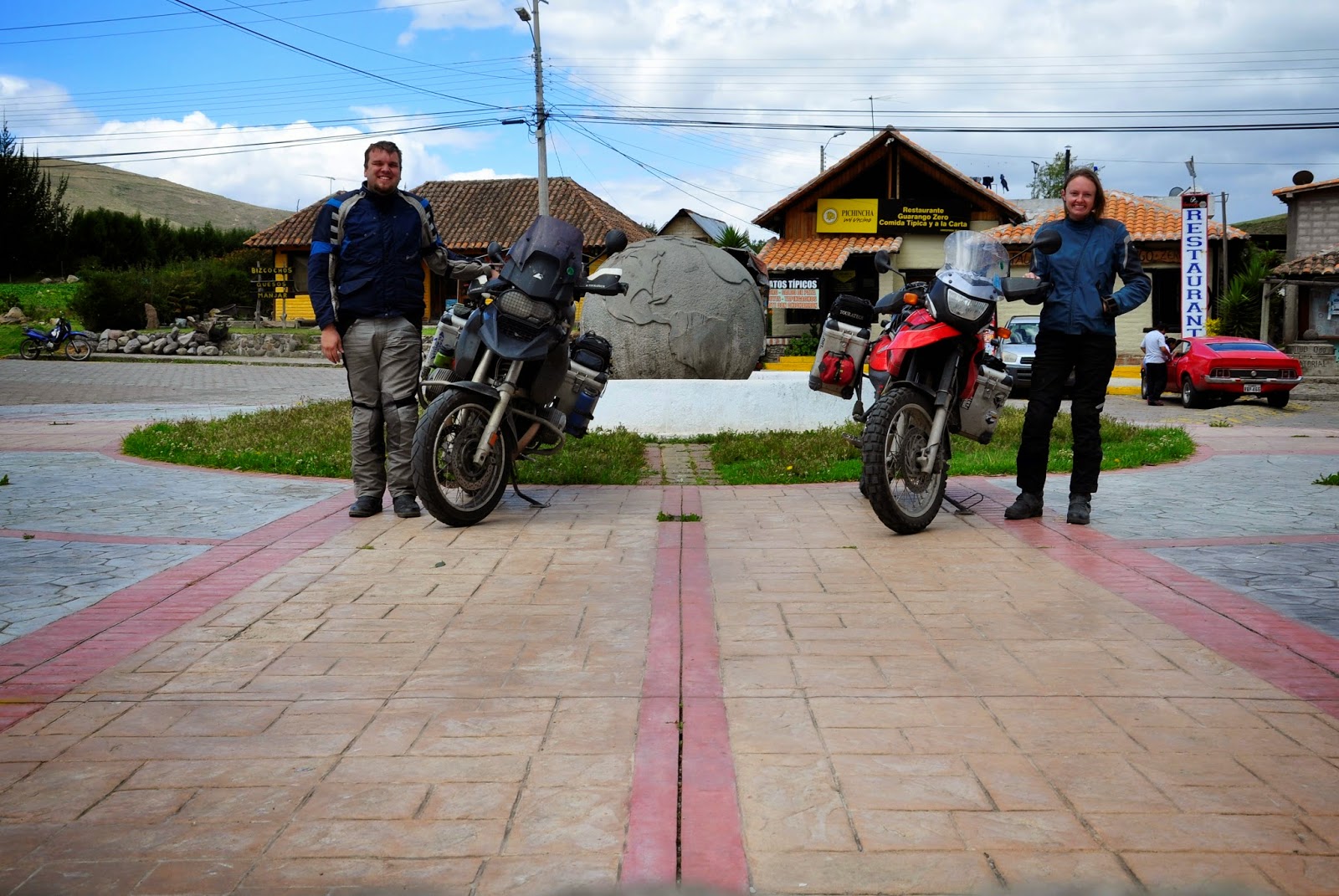 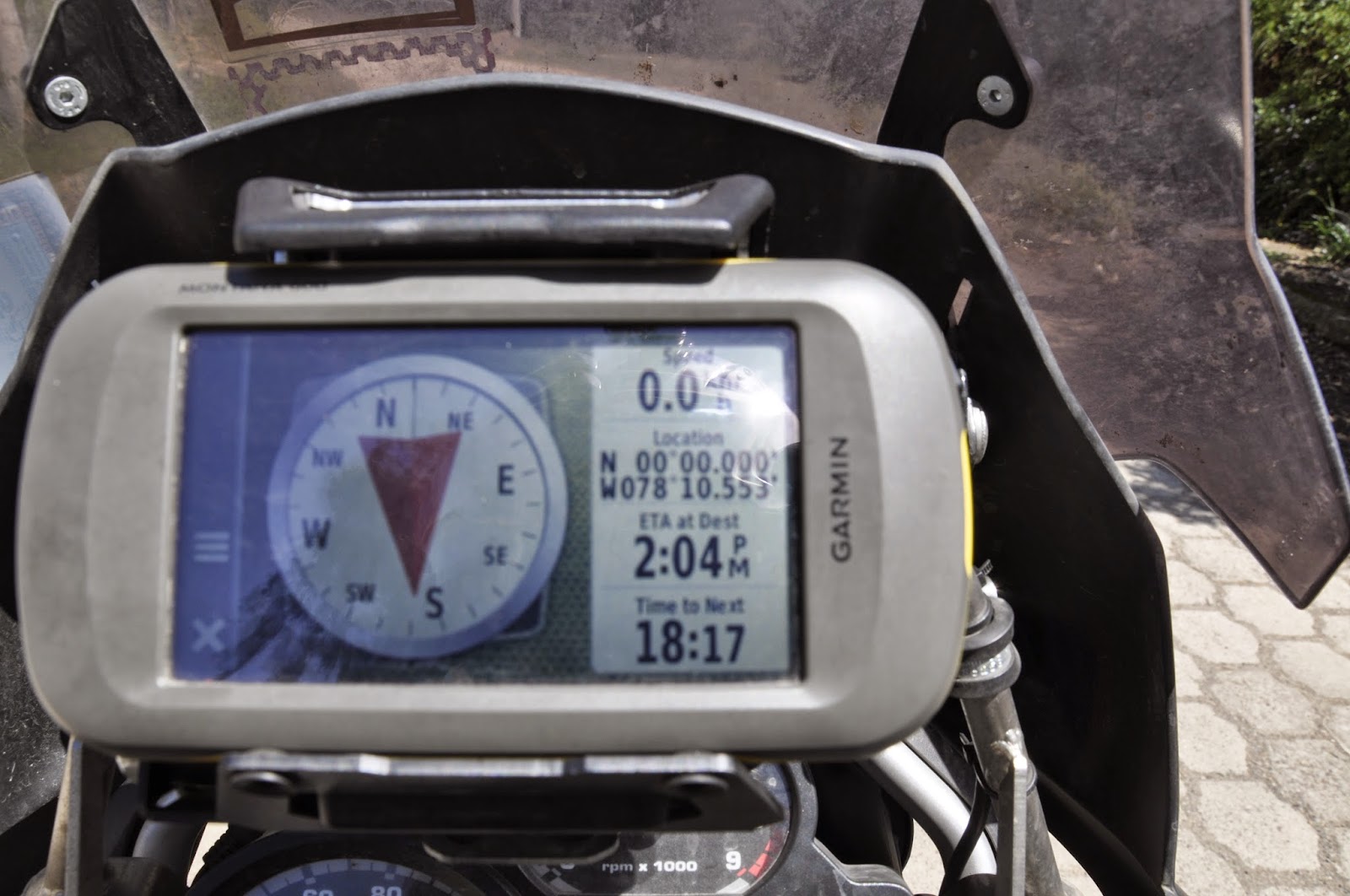 As we were doing the obligatory photo shoot at the globe sculpture on the side of the road, a local guy walked up to chat. He was driving a classic Mustang, and when Matt could talk shop with him, he got very excited. He asked for two of our trip stickers, and proceeded to proudly put them on his car. We felt honored. 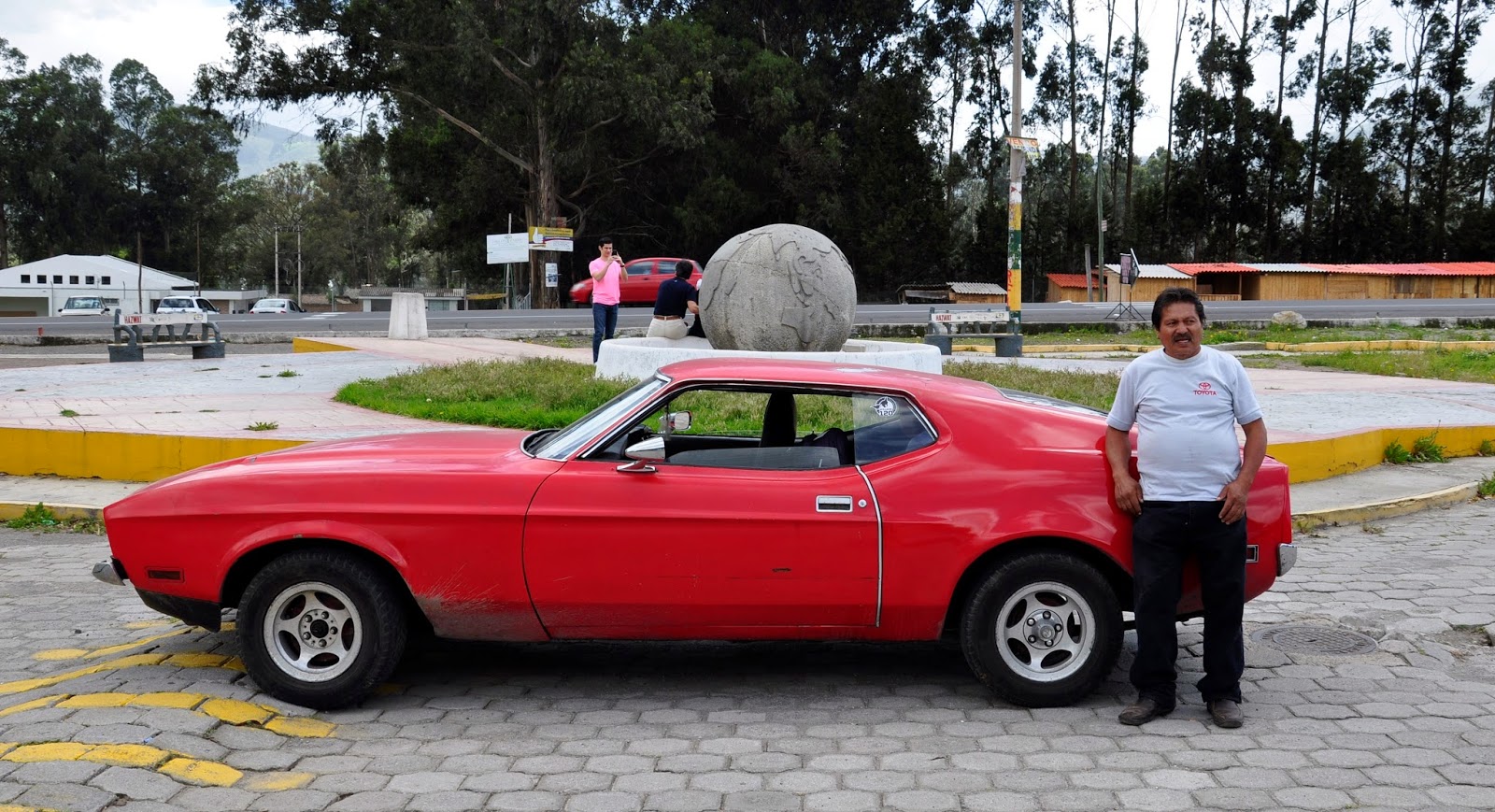 That morning, we received an invitation from a contact in Quito to meet him and friends on the eastern, rainforest side of Ecuador in the town of Tena. The route to Tena would take us over the mountains to the "drier" side of Ecuador (which is a bit of a misnomer, being that it's in the tropics). The prospect of avoiding the big city of Quito and possibly drier weather sounded good to us, so we accepted the invitation and soon found ourselves crossing the highest pass yet: 13,250 feet. Things became foggy and rainy quickly, which made it a little interesting when the road just disappeared in a couple places. Still, there was much lighter truck traffic, which was a welcome change of pace for us, and we managed just fine. 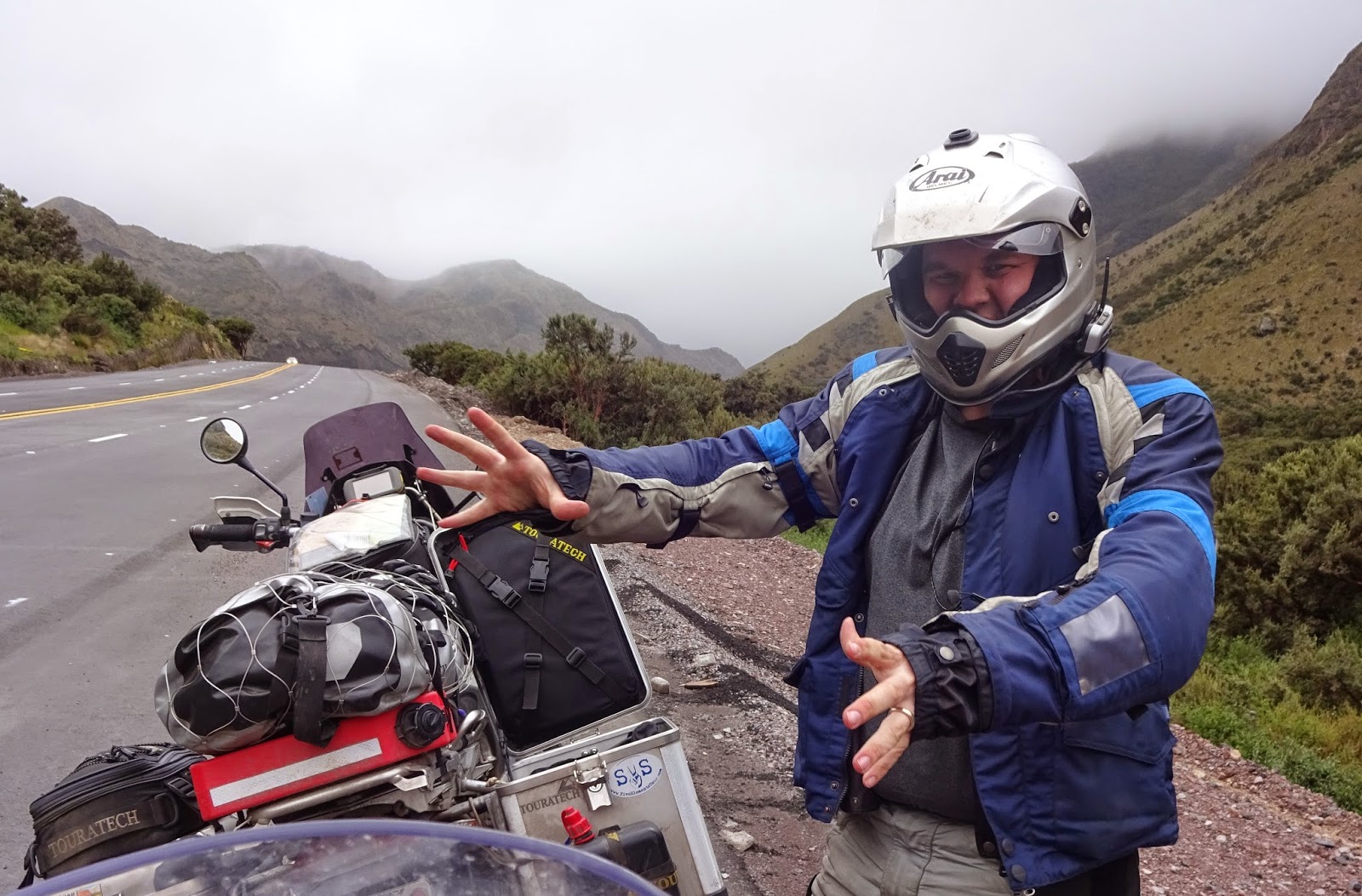 Arranging meet-ups on the fly with fellow riders can be a bit tricky because we can't really be in touch while we're on the road, and that in combination with no mobile service leaves a lot of room for unknowns. We pulled into Tena by mid-afternoon without really knowing where to look or who we were looking for. We didn't see any signs of big bikes in the general downtown area, so we figured we'd arrived first. We'd read about a town further into the rainforest that was a launching point for cool Amazon Rainforest tours, so we pushed on to Misahualli. The area and prices didn't really strike our fancy, though, so we booked it back to Tena, checked into a cheap but friendly hostel, and discovered an email from our contact Ricardo. He and his friends had arrived to town and invited us out for dinner. One thing led to another, and before long, we found ourselves at a discoteca. Turns out that everyone goes to discos here, regardless of age, and everyone LOVES to dance! We relish unexpected cultural encounters like these, and everyone had a great time. 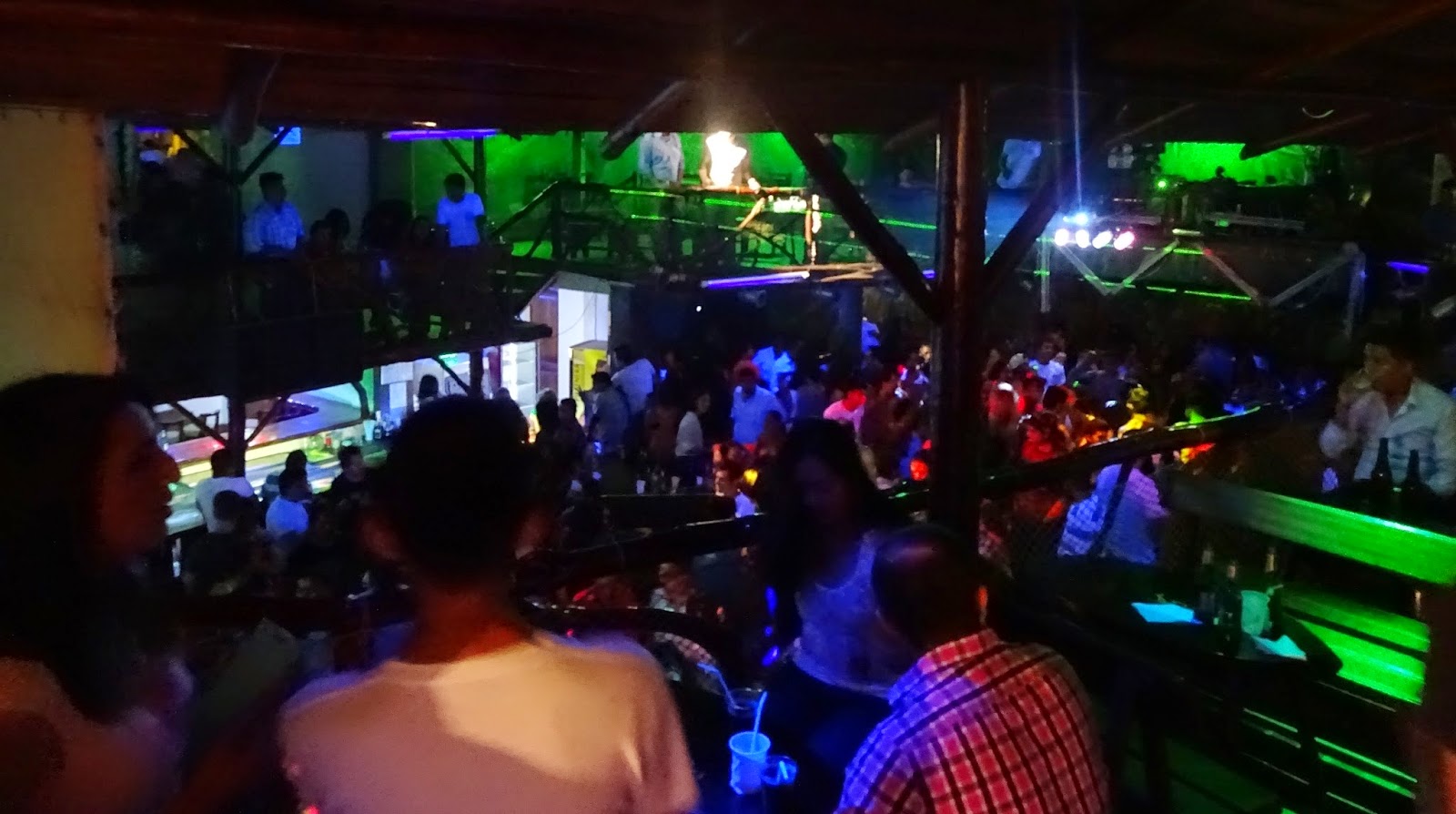 After that, we headed for Baños, having been told it's fantastic for nature activities. Unfortunately, we arrived in a drizzle and aside from passing waterfalls along the way, we couldn't see a thing, not even the volcano that the town was built at the foot of. ::Sigh:: I really wanted to see the flora and fauna of the rainforest, so we did a little reconnaissance and discovered that jungle tours are typically several days long. While we could see the area and town are lovely, it just didn't seem to be a good choice to join a tour given our weather luck and time constraints. So, we pushed onward after eating a set lunch and taking in yet another holiday procession. 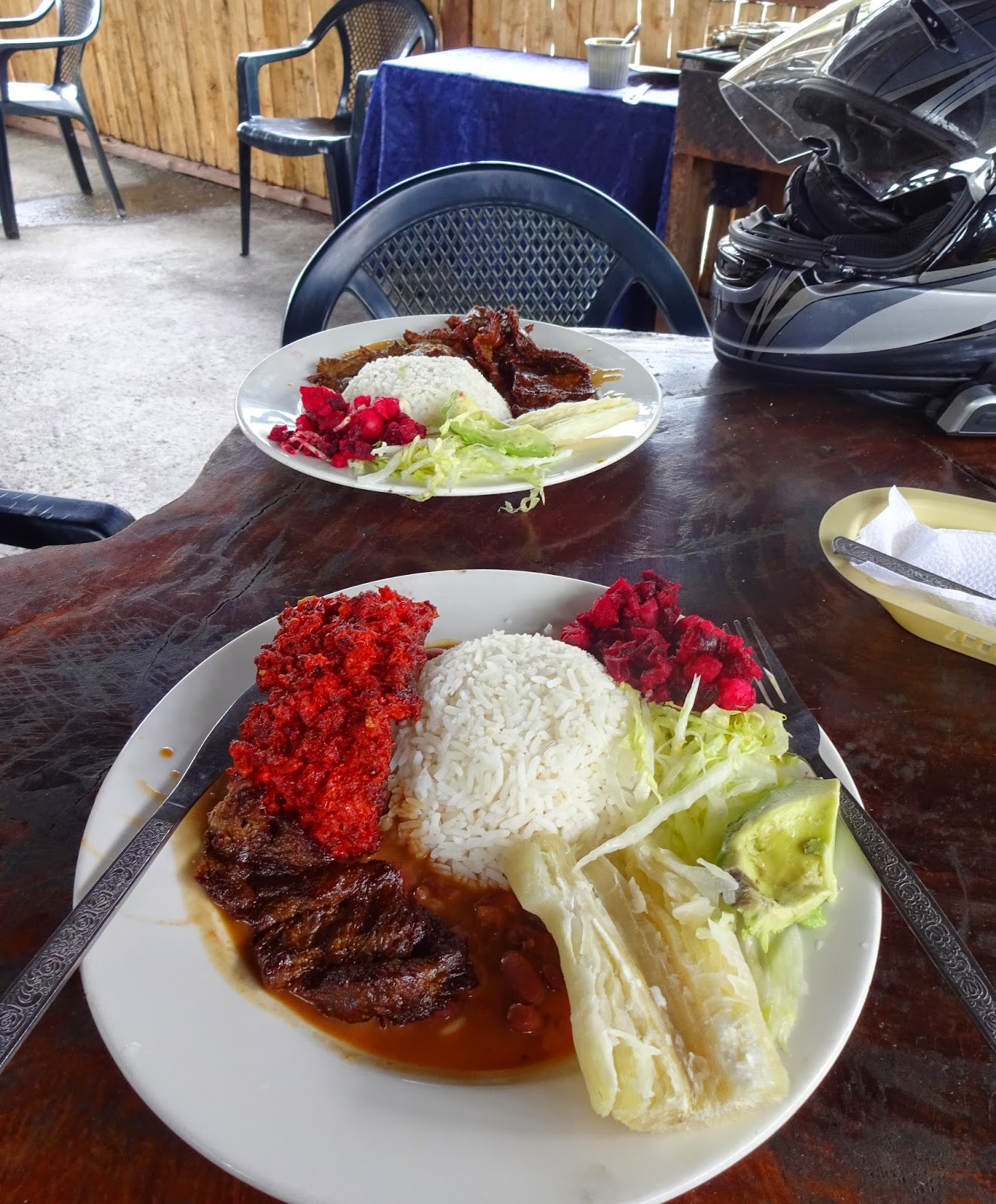 Riobamba was within reach, and we were hoping to take the Nariz del Diablo train in the morning. We tend to fly by the seat of our pants, and often—like the case of Tena—it works out well. In this case, however, a little planning and research would've been helpful. Turns out, the train no longer leaves from Riobamba. "Nariz del Diablo" is a mountain that looks like a nose, which the train climbs by taking switchbacks up it. It used to be a point along a regular passenger train route that started in Riobamba and ran through the Andes. It has now become a 2-car tourist train that runs out and back to Nariz del Diablo from the town of Alausi. We made plans to get up early the next morning and try again. In the meantime, we found a huge holiday display in Riobamba's main square. The scene was an attack on the senses: tons of street food stands, sections of sidewalk cordoned off for family pictures with everyone from Santa to the Simpsons, competing loudspeakers on every corner, huge Christmas light shows on the buildings lining the square… even mimes in the street! From the looks of it, the whole town had turned up in the square for the event. 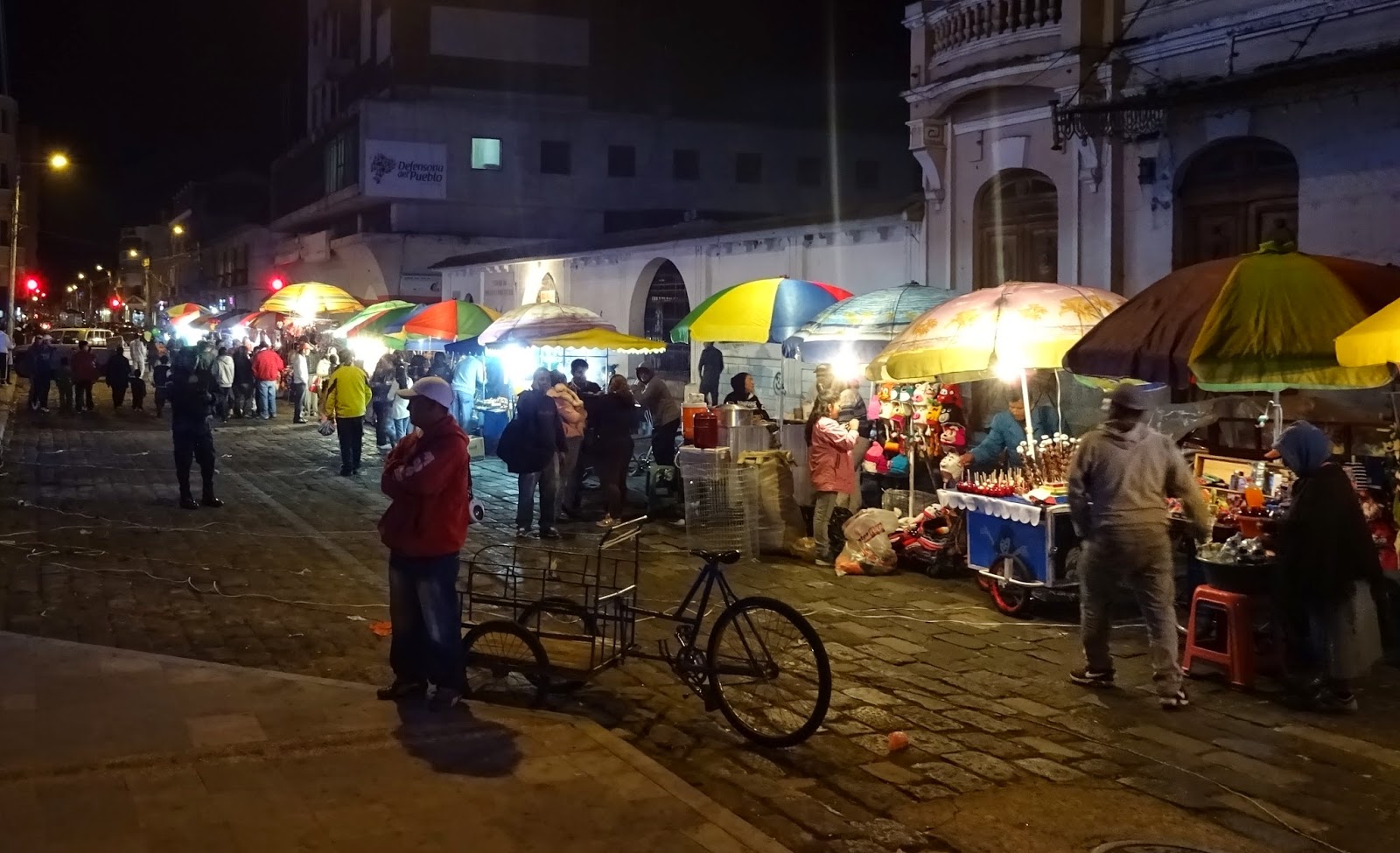 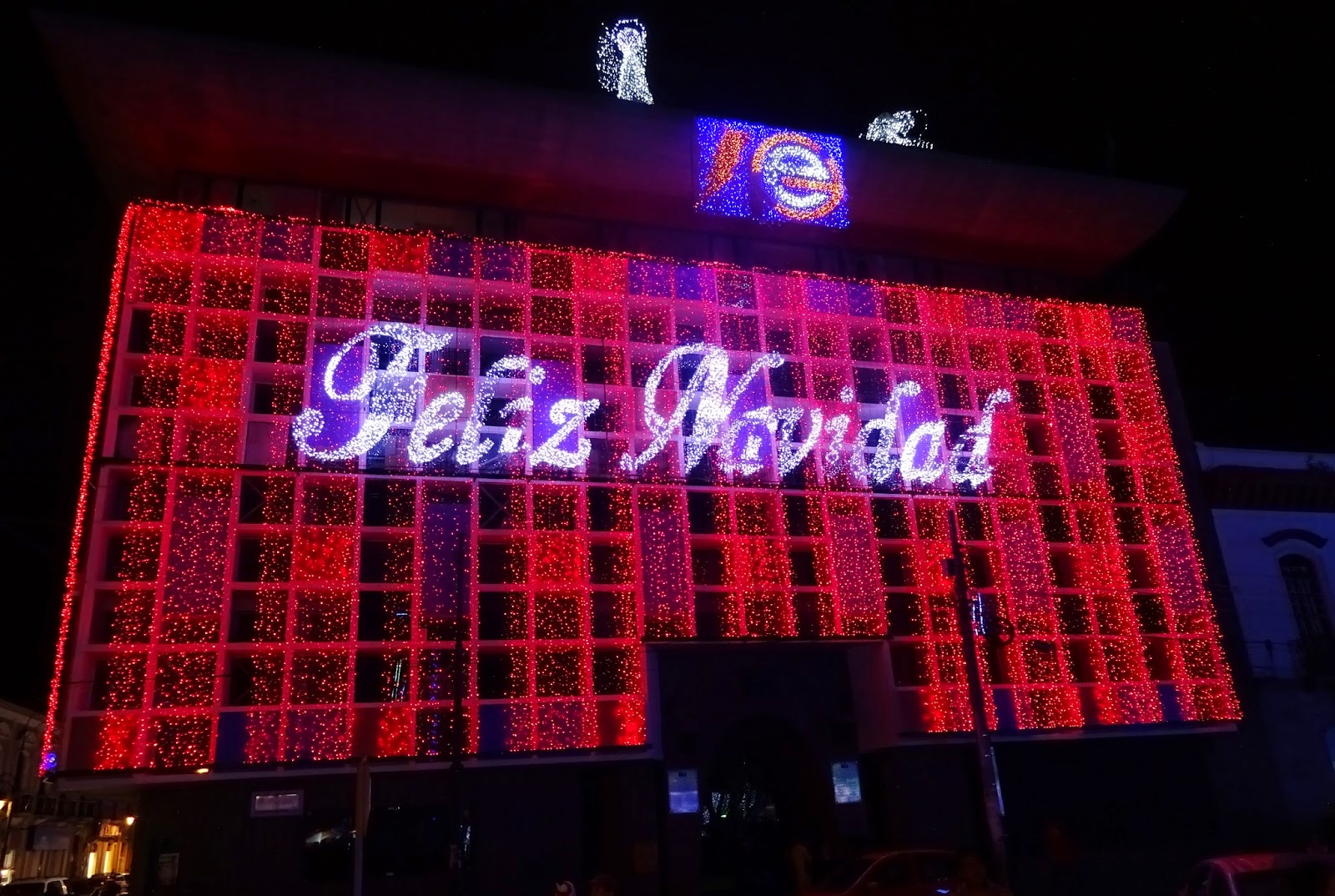 In our wanderings, we also discovered that Riobamba appears to be the place where all broken-down, creepy mannequins go for a second chance. Every store had at least one or two creepy mannequins missing limbs, eyes, or were pieced together like Frankenstein. 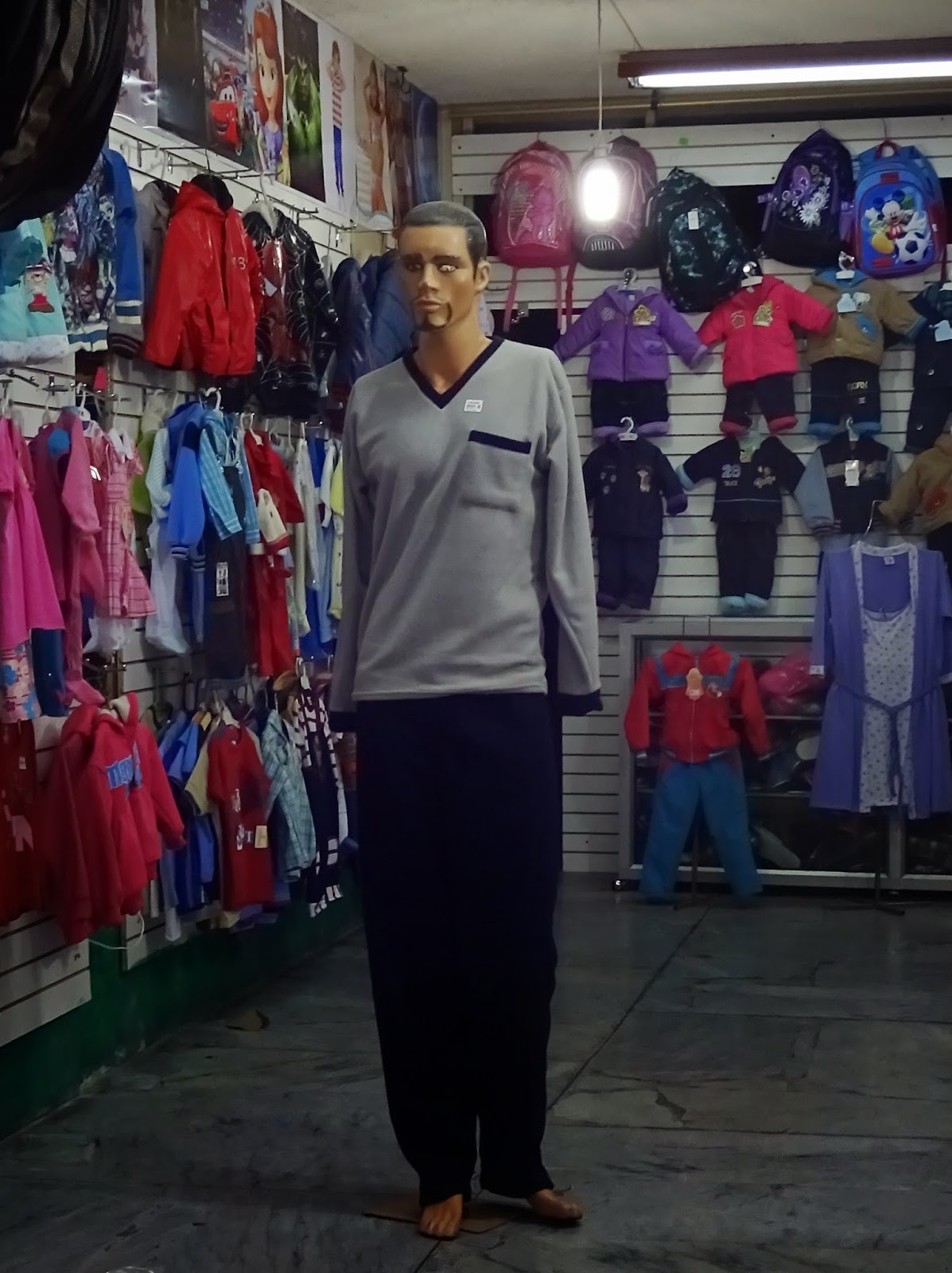 As planned, we got up early the next day to try to catch the train in Alausi, but no dice. The train was booked 4 days out. Well, sometimes you win and sometimes you lose. So, we realigned our sights for Cuenca. 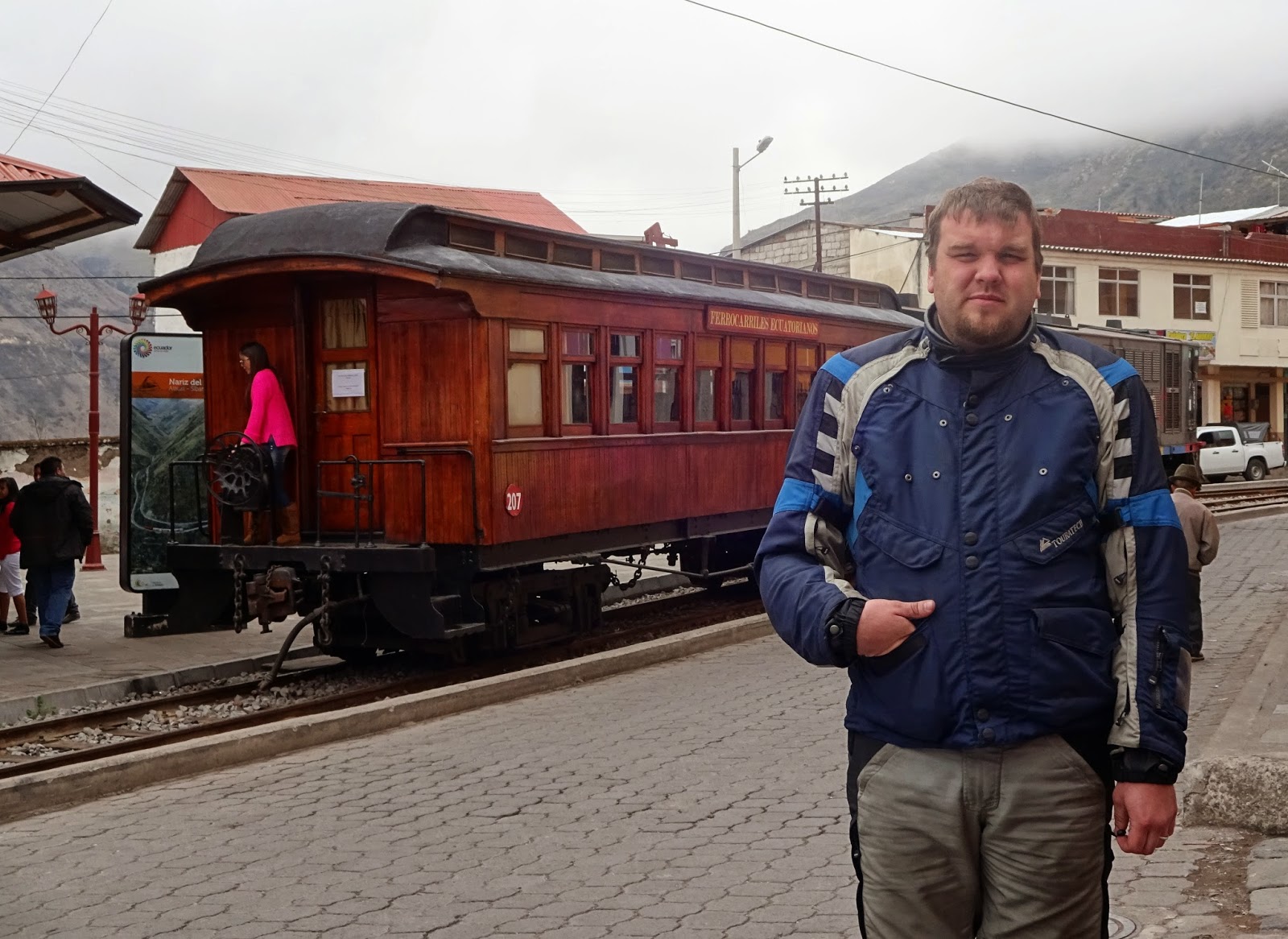 Maps on the GPS aren't really complete in southern Ecuador, so we're going old school, relying on maps and road signs. The approach works perfectly, and we arrived just after noon. It's a pretty big city and has a really neat old town, which we enjoyed and probably would've enjoyed even more if more places were open had it not been the holiday. We stayed around Cuenca an extra day with hopes of securing tires, and our new friend Ricardo tried to help us from a distance, but it just didn't work out. The particular tires we want are sold out of Matt's size for the next 3 months, and no other brands carried in the town make an enduro tire the 1200's size. C'est la vie. With friends in Peru beckoning us on, we ended up spending our last night in Ecuador on the border in Macará after a nice day of riding a twisty highway past rice fields. After spending so much time in Colombia, it felt like one week in Ecuador was relatively quick. It's markedly smaller than any other South American country we'll visit on this trip, though, and we certainly didn't rush as we zigzagged through. They say you can experience great diversity here by eating breakfast on the coast, lunch in the mountains, and dinner in the rainforest here. We absolutely partook in all of it. As we said goodbye to Ecuador, we recounted our observations from this beautiful country:
Much like Colombia, Ecuador exceeded our expectations in every way. As we move on to Peru, the country we've been looking forward to since the day we left, we're excited to see what more South America has to offer!